Wells’ movements around Quebec City over the past two winters. (©Project SNOWstorm and Esri)

The past few weeks have been fairly quiet on the surface, but there’s been a lot of activity behind the scenes — and some exciting news about old friends.

A number of Project SNOWstorm team members have been out trapping, trying to deploy transmitters. In North Dakota, Matt Solensky has been trying to follow up tagging Woodworth by targeting a dark, likely female, owl, but she’s managed to avoid being caught despite several attacks on the trap. On the Eastern Shore, Steve Huy had one of those Arrgh! moments when a snowy hit his rig, knocking the lure cage door open and freeing his best pigeon. In Montreal, colleagues working at the international airport have been trying to trap several owls there for tagging and relocation, but — perhaps because most of the birds in the East this winter are adults with some experience and savvy — the owls have proven tough to get.

We did get some great news from Quebec, though. Wells, who had come south in November and uploaded all of her summer data from the north shore of the Gulf of St. Lawrence in Quebec, is back on her 2017-18 territory along the riverfront in Quebec City, although Christmas Day she took a flight along the St. Lawrence past  île d’Orleans, then back to the city. (Wells’ transmitter, which dumped almost 5,000 GPS points in one, long connection, has been struggling against short days and low solar angle to recover battery power, so her fixes in recent weeks have been sporadic. More sun and fewer clouds would help, but it’s a tough season to rebuild solar power.)

Out on the plains and prairies, Pettibone and Woodworth seem to have settled down after both moving hundreds of miles in late December. Pettibone is currently about 60 km (37 miles) northwest of Moose Jaw, Saskatchewan, very close to Pelican Lake, one of a series of lakes in the Thunder Creek valley and a designated Important Bird Area because of the concentrations of shorebirds, white pelicans and tundra swans it hosts during migration.

Pettibone is actually using agricultural lands to the north of the Pelican Lake IBA itself, near the village of Brownlee. Like much of the land in southern Alberta and Saskatchewan, eastern Montana and the western and central Dakotas, this is part of the Missouri Coteau, a rolling plateau marked with millions of small glacial lakes, ponds, and marshes. Often known as the Duck Factory of North America for its breeding waterfowl populations, it’s critically important for many nesting and migrant birds.

Woodworth remains close to the U.S.-Canadian border in North Dakota, just south of the Turtle Mountain plateau, about 7.5 miles (12 km) southwest of the town of Dunseith. Like Pettibone, he’s using ag land interspersed with lots of small pothole ponds and marshes. 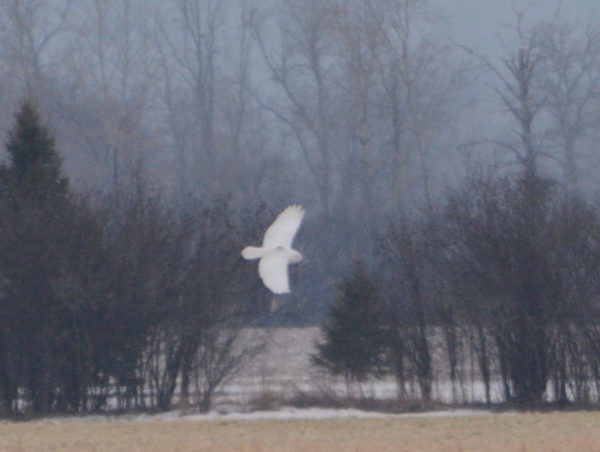 I’ve saved the best for last. Longtime blog readers will remember that we spent much of last winter trying to retrap two veteran SNOWstorm owls, Hardscrabble and Baltimore, who were wintering within a few kilometers of each other in southern Ontario. (In both cases, their transmitters had failed, and we wanted to remove them and extract whatever stored data they contained.)

After more than half a dozen attempts, SNOWstorm partner Dave Okines from the Prince Edward Point Bird Observatory — with help from our good friends Patricia and Daniel Lafortune from Ottawa — was able to catch Baltimore last winter and remove his transmitter. (We got some stored data from it, but it seems to have stopped collecting GPS points in January 2017, when the glitch hit.) Hardscrabble proved to be a cagey bird, and despite a lot of work on the team’s part, they were unable to retrap him.

Dan and Pat haven’t given up, though, and over the holidays they found that Hardscrabble is back on the same winter territory as last year, his backpack transmitter easily visible. Not only that, there is an adult male snowy whose plumage pattern matches that of Baltimore, back on the same territory Baltimore has used the past three winters, perching in his favorite trees — so while we can’t be certain it’s him, it seems a very good bet.

Hardscrabble was at least four years old when he was tagged in New York in 2016, while Baltimore was first banded as a juvenile in 2014 in Maryland, and tagged the following year. Both have contributed huge datasets to our understanding of annual movements in snowy owls — and evidence that some snowies in the East, as in the West, can show a lot of fidelity to wintering sites.

We remain committed to retrapping Hardscrabble and removing his dead transmitter, both for his sake and to see if we can extract old data from it, and determine why it failed. Keep your fingers crossed, because he’s been caught several times in the past and is a wary bird.