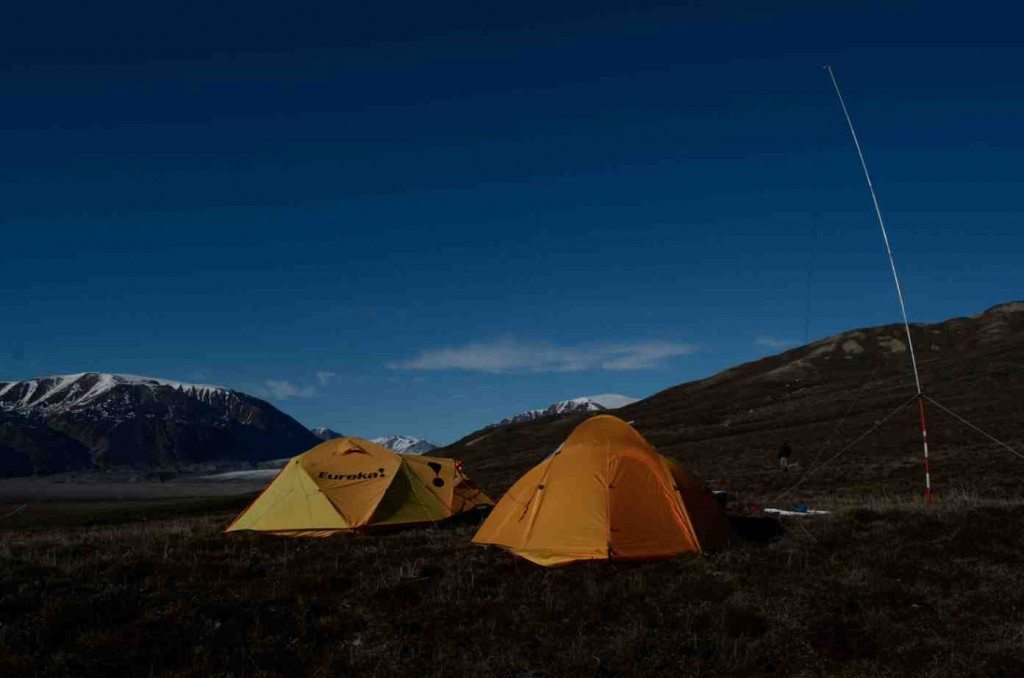 The Laval University research camp sits under the perpetual sun of an Arctic summer sky on Bylot Island. (©A. Beardsell)

Welcome back to a new season of snowy owl research with Project SNOWstorm! Some owls are already moving south into the Canadian prairies, the Great Lakes and Northeast, and we’re gearing up for what promises to be another exciting season of research. We’re anxiously waiting for the first returning tagged owls to appear and start downloading their summer data, and we’re laying plans for additional tagging operations in the weeks and months ahead.

In the meantime, though, here’s the view from up north. SNOWstorm team member Jean-François Therrien, senior research biologist at Hawk Mountain Sanctuary in Pennsylvania,  has been studying snowy owls in the Arctic for years with Laval University in Quebec. As usual, J.F. was on Bylot Island in northern Canada this summer during the breeding season, and has this report.

Studying snowy owls on their breeding grounds is a great challenge because (as most of you know by now) their irruptive behavior and breeding dispersal causes them to move over vast areas every spring, invading and deserting regions according to food abundance.

These highly mobile predators thus cover large areas annually, searching for a place to settle and breed. They then gather in regions harboring high densities of lemmings, the mouse-like Arctic rodents and the owls’ preferred prey. Given the fact that the peaks in lemming densities vary tremendously from one site to another annually, you never know where snowy owls will be seen and in what numbers.

The biggest challenge we scientists face, then, is to cover similar continent-wide areas to assess breeding densities. Given the size of the Arctic tundra ecosystem, coupled with the transportation costs required to cover this huge expanse of land, and the security issues associated with field work in this remote wilderness, it is impossible to precisely assess absolute numbers of snowy owl pairs on a continental basis. That is why we monitor a few key sites where we can precisely assess breeding numbers and then extrapolate to the whole region.

So, like most years, this summer a team of Arctic researchers including myself settled on Bylot Island in Nunavut, Canada, to study the tundra ecosystem in the eastern Canadian Arctic from late May to mid-August. Our monitoring includes several raptor species (peregrine falcons, gyrfalcons, rough-legged hawks and of course snowy owls), for which we assess nesting density and reproductive success. Each year we wonder how many pairs will settle and breed on the study area. Since most of those predator species feed on lemmings, and because the lemming populations fluctuate heavily between years, we never know what we’ll find. 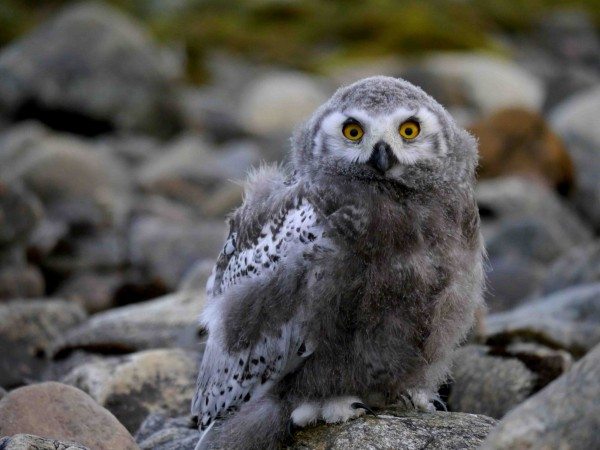 In the development stage known as “white mask,” a fledgling snowy owl checks out a human in its Arctic home. (©A. Robillard)

Those of you following this blog might remember that the summer of 2014 was a banner year for lemmings and owls on Bylot Island. That year, we reached the highest numbers ever recorded more than 20 years of monitoring. The summer of 2015, in contrast, was a much quieter season. Lemming populations were rather low, and no snowy owls were seen nesting over the 500 km2 study area. This summer, 2016, was another medium year, although lemming populations were a little higher than the year before. Still, we managed to find five active snowy owl nests — an exciting result, given that lemming numbers did not reach very high densities and that the next peak in lemming abundance isn’t expected until 2018.

Other reports I received from the eastern Canadian Arctic suggest there were a fair number of breeding snowy owls across the Ungava Peninsula in northern Quebec, although I have no reliable indication that those nests produced as many fledglings as the epic 2013 breeding season, which preceded the historical winter irruption of 2013-14.

Combined with the handful of nests monitored on Bylot Island, it suggests that there were at least some fledglings being raised in the eastern Canadian Arctic, and that they must be dispersing at this very moment. I thus believe we should at least see some birds coming our way across temperate eastern North America this winter, especially in the usual locations (northern United States and southern Canadian regions, New England coast and around the Great Lakes). But again, snowy owls have that tendency to surprise us, so we’ll have to wait and see how many birds come to our latitudes. As always, we’ll keep you updated as winter 2016-17 unfolds.