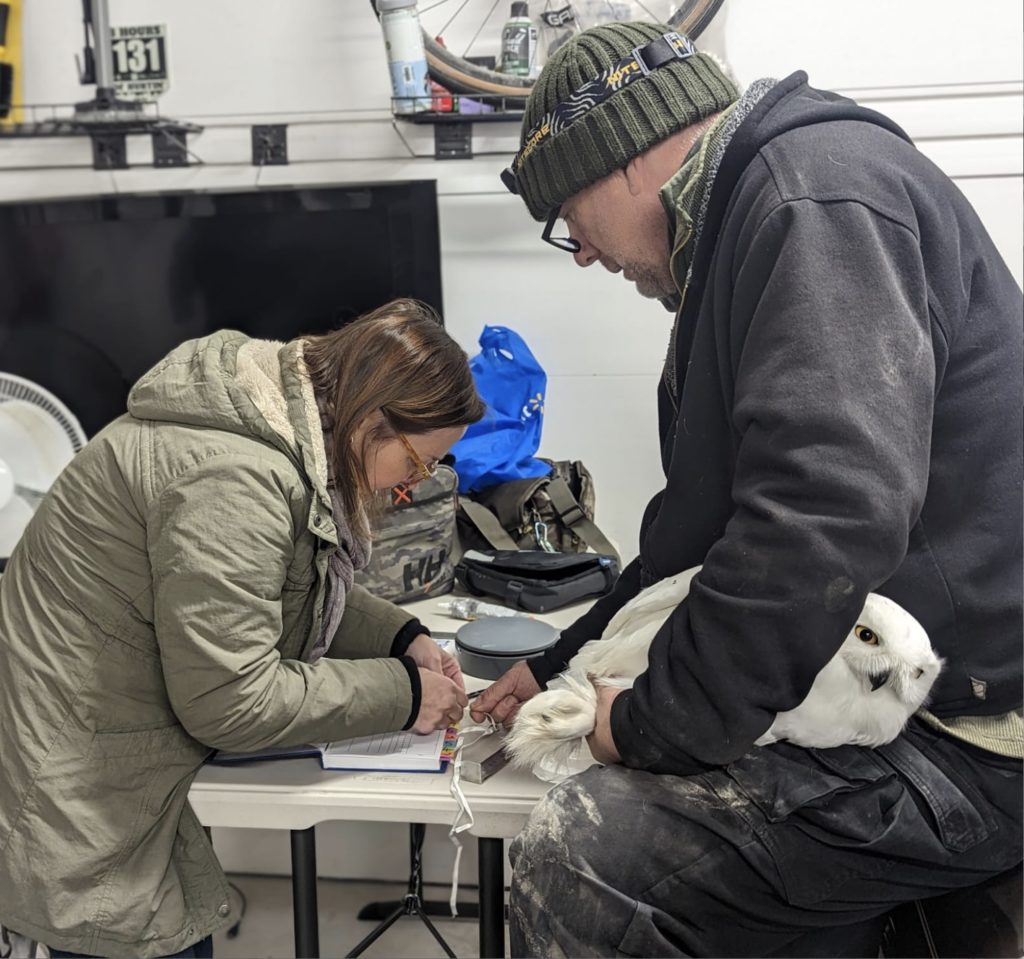 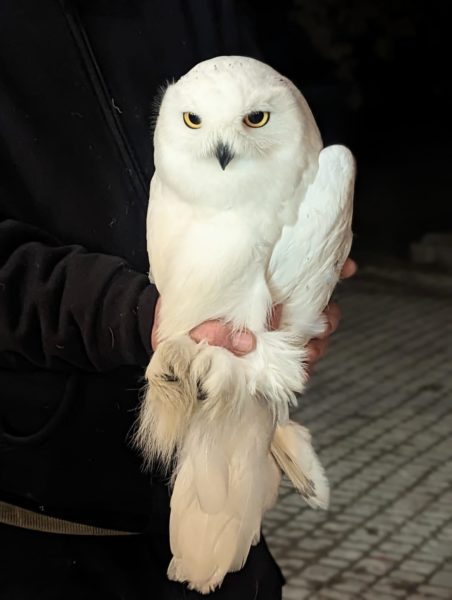 Newton is an almost completely white adult male, at least five years old based on his wing feather molt.

As we indicated in our last post, our newest banding team up in Ontario has been busy. On Jan. 7 Charlotte England and Malcolm Wilson from the Simcoe Raptor Research Group tagged Huron, an adult female — and a few days later they were out again early, working an area of southern Ontario west of Guelph.

On Jan. 11, they quickly found a snowy sitting out in a field and set up for it, but while the bird produced what Malcolm called “good ranging behaviour” in the form of head-bobbing and neck-stretching — signs of predatory interest — it never pulled the trigger and made an approach.

“At around 10 a.m. we found an adult male on the ground in a difficult spot to try catch it, so we made a note of the location to try later and returned back to base as it had started snowing pretty hard with strong winds,” Malcolm said.

Heading back out later in the day — that magic hour near dusk when hungry snowy owls start hunting — they found what they assume was the same adult male, now perched up on a utility pole near its original location.

“We set the trap and before I could reverse 10 meters, the bird was off its perch coming in, and was caught immediately,” Malcolm said. “Weighing him, we were happy to see he was just under 1.7 kg [3.75 lbs.], and a fair muscle score. We were eight minutes from our accommodation, so we went there with the bird to fit the transmitter, in the comfort of the well-lit garage out of the cold, snow and wind.” 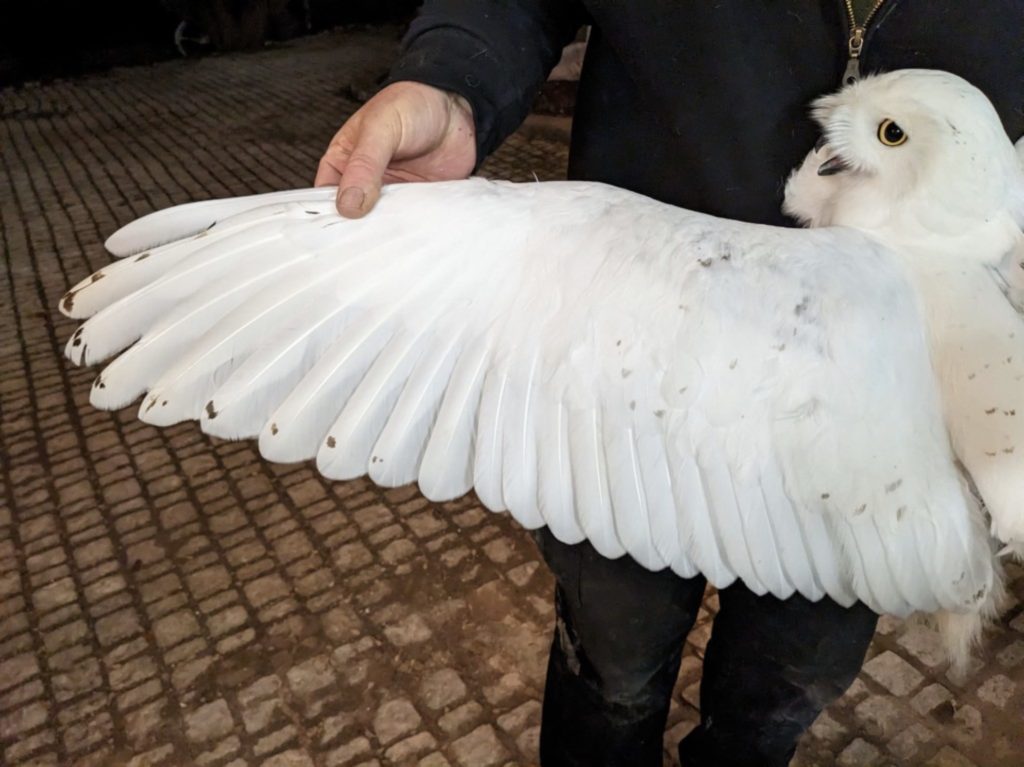 Most (but not all) male snowy owls get whiter with age, until like Newton they have few dark markings remaining. (©Maria Mak)

“Our hosts, a Mennonite couple, were utterly thrilled to watch the proceedings and were extremely helpful by providing us with whatever we needed. We fitted the transmitter in under an hour and drove Newton” — the bird was nicknamed for a nearby village — “back to the pole we caught him from and released him without a problem.”

Newton is an almost pure white after-fourth-year adult, meaning he’s at least five years old. You can follow his movements on his tracking map. Newton’s transmitter was paid for by generous donations from the public. 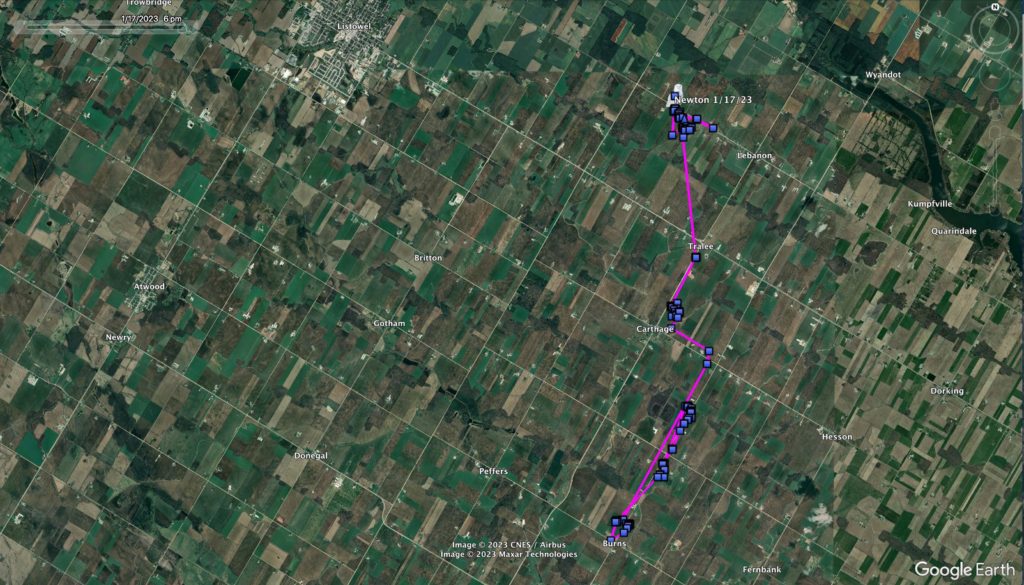 Newton has been hunting farmland east of Listowel, ON. (©Project SNOWstorm and Google Earth) 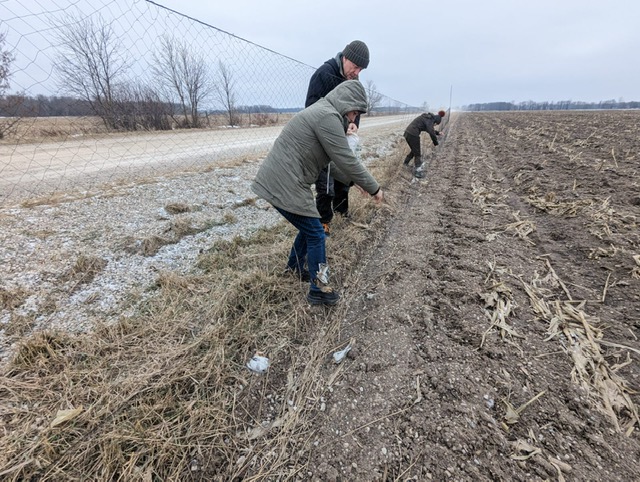 Incidentally, Charlotte and Malcolm aren’t only looking for snowy owls when they’re banding. The same day they trapped Newton they also banded a northern shrike, the third they banded on this trip out of five they’d seen. And the day they tagged Huron they and their U.K. colleagues set up mist nets to catch snow buntings, banding 14 out of a flock of a couple thousand. As you can see, snowy owls aren’t the only handsome Arctic birds to come south in winter. 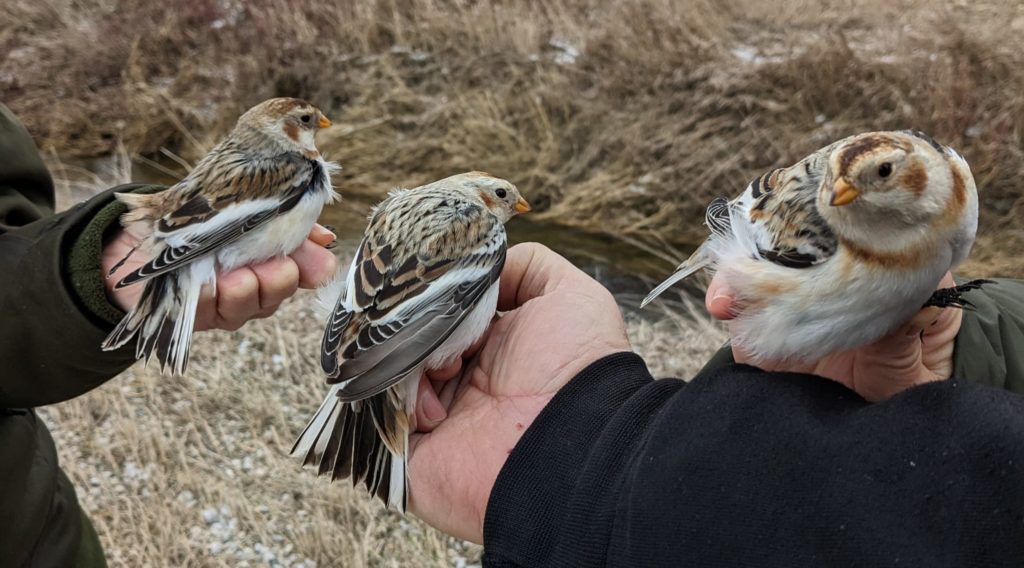 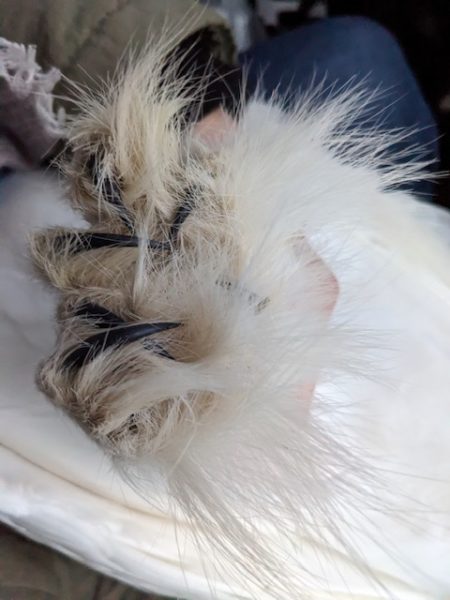 A new study suggests snowy owl talons (in this case, those of Newton) are built for a wide range of often large prey. (©Maria Mak)

The paper, “Ecomorphological adaptations of owl feet and talons,” appeared last month in the Journal of Zoology; although the full paper is behind a paywall, the abstract is available here.

The joint Canadian-American team analyzed 64 specimens of 15 species of owls from around the world, looking at the size, strength and design of their hind limbs (legs and feet) and their talons. The researchers found that talon shape, or morphology, was closely tied to their typical prey.

Snowy owls, it turns out, are in a class by themselves. Although in summer they are, famously, small mammal specialists targeting lemmings and voles, they possess unusually powerful, deeply curved talons (as any bander who has been momentarily careless while handling one can painfully attest). That’s because in winter they become generalist hunters, often taking prey like large waterbirds or mammals that weigh more than themselves. Their weaponry evolved for that portion of their life cycle, but works well enough for small prey in summer.

6 Comments on “Next up: Newton”