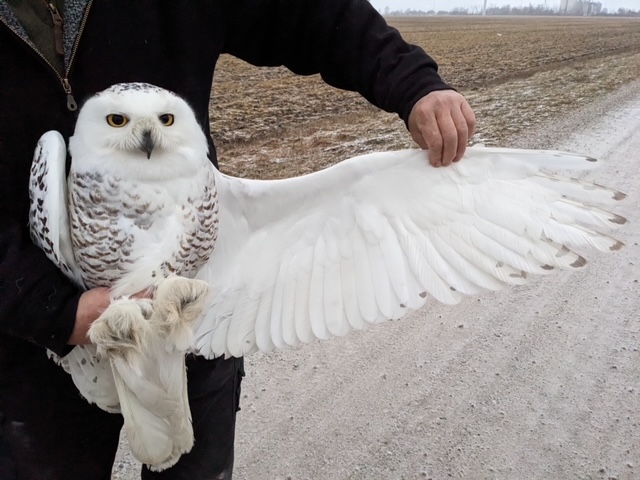 Huron is an after-third-year adult female, caught near the shores of her namesake lake. (©Malcolm Wilson and Charlotte England)

It’s been a slow start to the season, but not for a lack of trying on the part of our cooperating banders — and that’s finally paying off as more snowy owls have moved into their territories.

Our newest trapping team are Charlotte England and Malcolm Wilson in the Toronto, ON, area. They’re part of the Simcoe Raptor Research Group, run by our colleague Nigel Shaw, and both have deep experience working with raptors. Over the past two weeks, Charlotte and Malcolm, joined by a couple of visiting U.K. ringers (as banders are known in Britain), were trapping in southern Ontario between Lake Huron and Lake Erie.

“On Jan. 7 we set off from our base and drove 1.5 hours west to our Lake Huron site to arrive at dawn. It was 0 degrees [C] and went up to +4 during the day, with some snow squalls and light wind,” Malcolm reported. 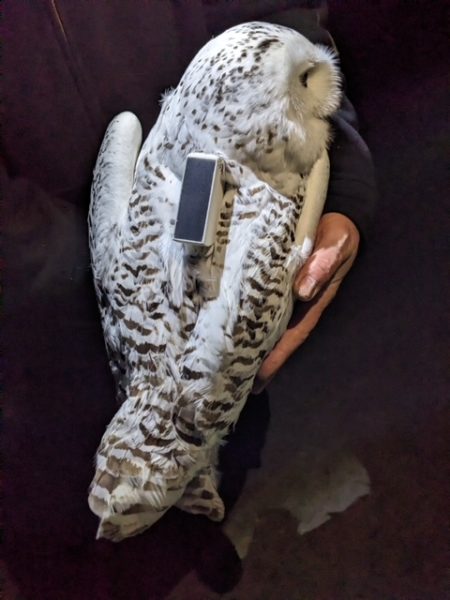 After an hour of careful work, Huron’s transmitter is ready to go. (©Malcolm Wilson and Charlotte England)

“Our first sighting was a dark-morph rough-legged hawk, which we tried to catch, but the bird was not interested and my suspicion was that it was a resting bird on migration. RLHA were very thin on the ground this year and the only birds we’d been seeing were all flying in a southwest direction. Possibly a result of the HPAI [highly pathogenic avian influenza] which has affected many bird populations recently.”

They saw a vehicle flush a snowy owl, which they quickly caught, but because she was small and light for a female they opted not to fit her with a transmitter. They also spotted an adult male in a field, but because he was too far to trap, they made a mental note to come back late in the day, when snowies fly up to utility poles and other high perches to begin hunting.

“We saw a total of seven birds in all at the site and at 4 p.m., returned to the location where we saw the adult male. Just as we arrived, we saw the owl fly off in a southwesterly direction, in a way that made me wonder what had made it go. Looking back along the track we had just come down, I saw a big female snowy owl had landed on one of the utility poles! This was what had most likely scared the male into flying off like he did,” Malcolm said.

They quickly trapped the female and checked her weight, muscle mass and fat stores to determine if she qualified for a transmitter, since we only tag owls in top condition. Looking at her molt pattern, she is at least three years old and possibly older. “She weighed 2.48 kg [5.5 lbs.] and was in good condition,” he said. “We fitted the transmitter to her which took an hour in the dark, in the vehicle. With plenty of head torches we got the unit satisfactorily fitted.” Because of her proximity to the lake, the team dubbed her Huron. 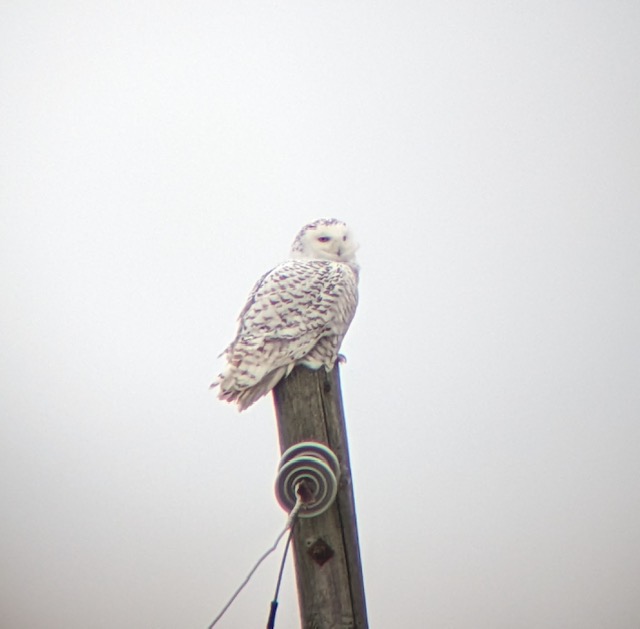 Two days after being tagged, Huron was hanging out eating voles. (©Malcolm Wilson and Charlotte England)

“Two days later we returned to the site and saw five snowies including Huron, who had moved approximately one kilometer to the southwest and was sitting on a utility pole. We watched her for 20 minutes and she seemed very relaxed and showed no discomfort or fidgeting due to the transmitter. At one point, she flew down and caught and ate a vole, so all seemed well with her.”

The cost of Huron’s transmitter was underwritten by generous donations from the public to Project SNOWstorm. As always, you can follow Huron’s movements (also, as always, time-delayed 24 hours for her protection) at her tracking map here. 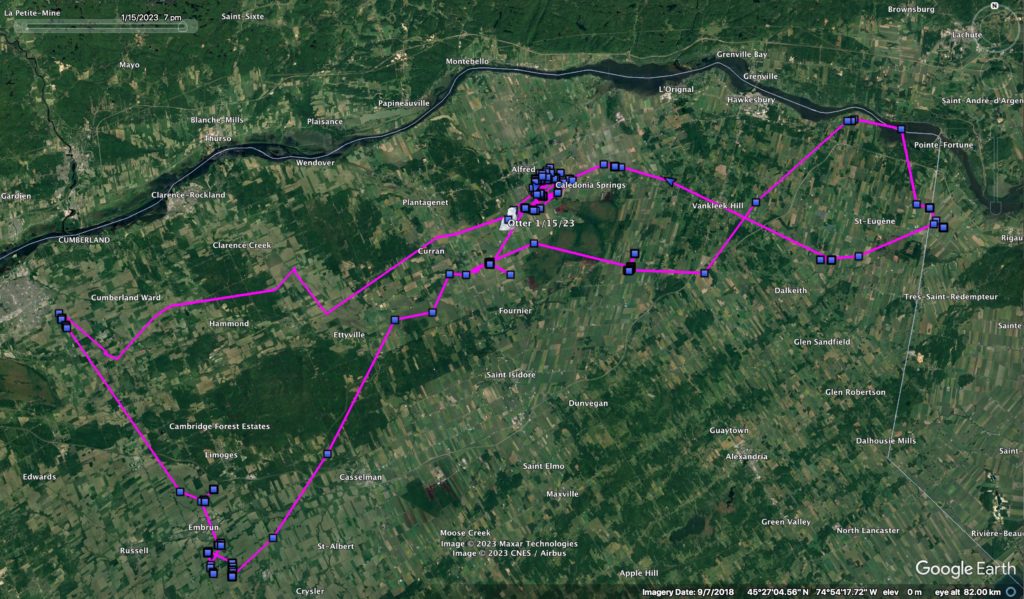 The news elsewhere is same old, same old. Columbia is sticking like a tick to what must be a productive winter territory near Carman, MB, while Otter keeps looping the circuit around and around the French-speaking townships of southern Ontario, occasionally crossing briefly into Québec. He did settle, finally, for a few days late last week near Alfred, ON.

This is an interesting change from his behavior last winter, when he occupied a very small territory east of Lake Abitibi for the entire winter. Why? Could be that prey is less concentrated where he is this winter, or maybe owls just get the itch to move. One advantage to tracking the same individual for years, as we have with Otter (this is his fourth winter on the grid), is to see the fascinating range of variation in behavior from one season to the next.

Next up: Newton
How Does This Winter Stack Up?