Woodworth is wandering — this second-year male has moved some 86 miles (140 km) from where he was trapped in North Dakota. (©Project SNOWstorm and Google Earth)

Some wander, some stay; that’s always the pattern every winter with our snowy owls, and it makes our work interesting.

Woodworth, the second-year male tagged earlier this month by Matt Solensky in eastern North Dakota, has been on a bit of a walkabout. On Dec. 14 he began moving north from his capture location near his namesake town in Stutsman County, and over the next three days traveled 86 miles (140 km) north into Wells County. It’s lonely country; the nearest town, Hamberg, is usually described as a “near-ghost town,” its population now just 20, while Heimdal, a bit further west along the Big Slough, is pop. 27. When Heimdal was laid out in 1910, bison skulls — remains of the great slaughter in previous decades — were so common they were used to mark roads, demarcate out town lots and farm sections. Like much of the Great Plains, the human population here has been in decline for generations; Wells County peaked at 13,285 in 1930, and was barely 4,000 in 2010.

Woodworth had been trapped close to where Pettibone spent the winter last year, but this season Pettibone — also an adult male — is more than 460 miles (700 km) to the northwest. Pettibone looks as though he’s settled in to a winter territory on the northern fringe of the prairies, in the farmland west of Melfort, SK, where he’s been since early November. This is barely 70 km (44 miles) south of the edge of the boreal forest zone, but in a zone with good cell coverage (as is the case in most of the province). 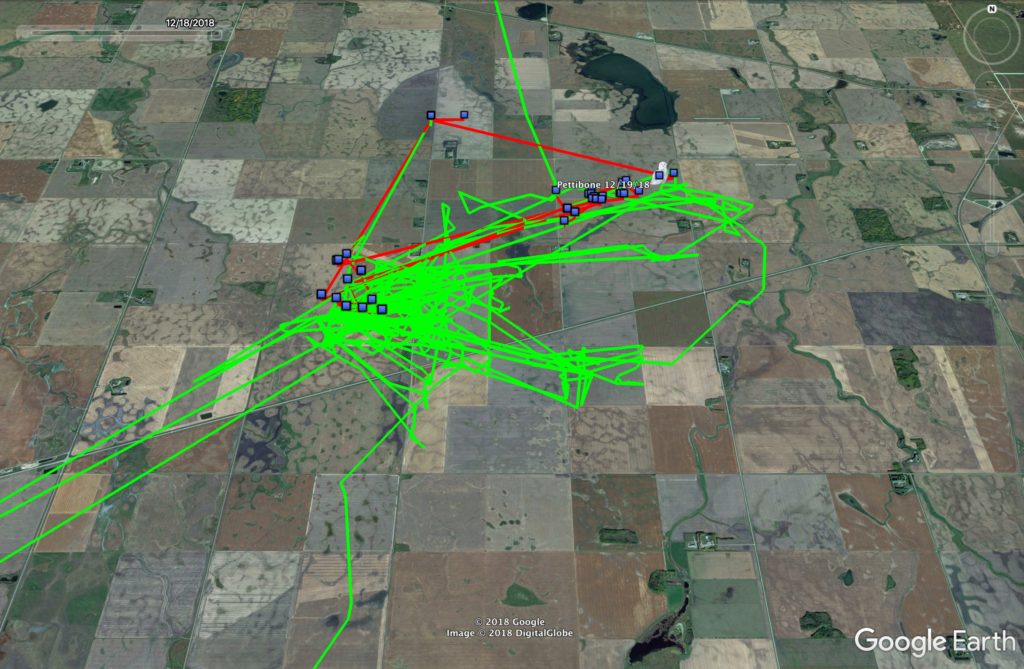 Pettibone’s latest movements (red) show that he’s not straying much from his winter territory. (©Project SNOWstorm and Google Earth)

In the first days after his arrival this adult male ranged almost 20 km (13 miles) south, to near the town of Pathlow, but flew back north again, and since mid-November has been using a territory of about 132 km (52miles), especially a core zone of less than 62km (2.42miles). A retired Ducks Unlimited biologist and raptor bander in Melfort has been keeping an eye out for Pettibone, whom he says is one of many snowies wintering in that same general area this year.

Because it looks as though Pettibone is going to winter pretty far north, where day length and solar angle are both meager at this time of year, we’ve sent his transmitter a new duty cycle so he’s only recording a GPS location every two hours. While it reduces the amount of data we can gather on him, we’re hoping it prevents a battery brown-out during the darkest part of winter — what we’ve started calling “the Valley of Death” for our transmitters, when they sometimes go into sleep mode for a few weeks. The great thing about the CTT transmitters we use is that, besides communicating data to us via the cellular network, we can send new instructions to the unit as needed, as in this case. Once we come out the other side of the shortest days, we can ramp up data collection again.

Staying in the Arctic
A New Look for Our Maps!