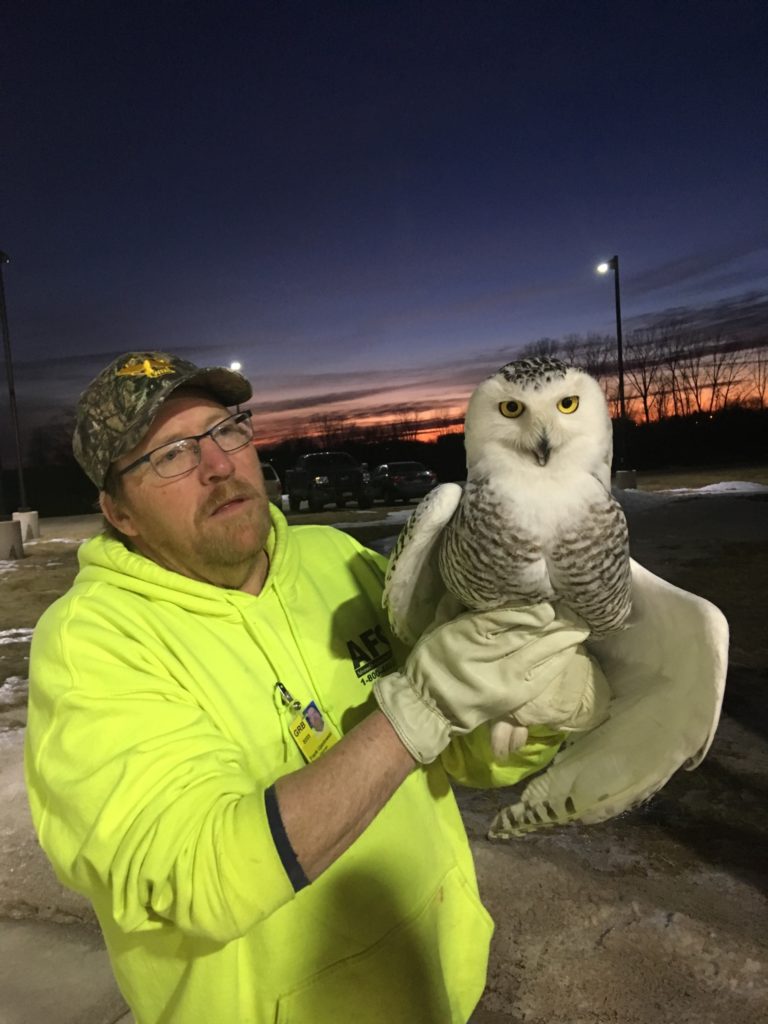 Frank Ujazdowski from Project SOAR with one of the many snowy owls he’s moved from eastern Wisconsin airports the past two winters. (Courtesy Project SOAR)

From the beginning, one of the goals of Project SNOWstorm has been to find ways to keep snowy owls and airplanes apart, for the safety of both. We’ve worked with airport authorities and federal and state wildlife agencies, helping to trap and relocate snowy owls were possible, and tagging some of those relocated birds to better understand their movements after release. Norman Smith at Massachusetts Audubon, one of the founders of SNOWstorm, has been doing that kind of work at Boston’s Logan Airport since 1981, moving as many as 150 owls in a single winter.

But there are a lot of airports in snowy owl country, and a lot of opportunities for owls and planes to get into trouble. In Wisconsin, an unusual partnership is saving owls at airports — and allowing us to gather more tracking data from those they move. Called Project SOAR — Snowy Owl Airport Rescue — it was the brainchild of falconer Frank Ujazdowski and two leaders of local Audubon chapters, Janet Wissink of Winnebago Audubon and Erin Geise of Northeast Wisconsin Audubon. 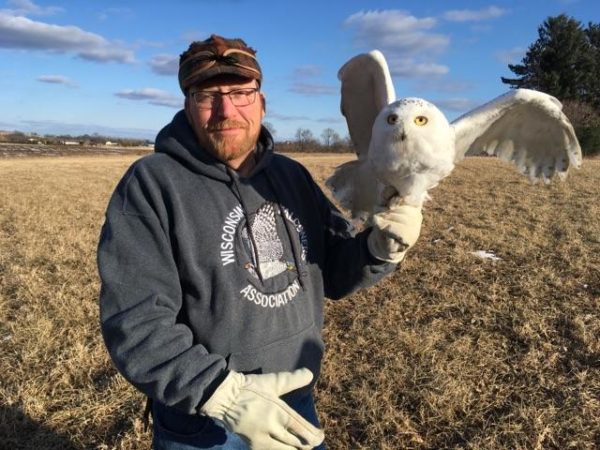 Frank grew up in northern Wisconsin and at an early age developed an interest in falconry, eventually becoming licensed and flying goshawks, redtails and peregrines. In 2018, after a regional airport in eastern Wisconsin shot a snowy owl that was posing a hazard for planes (something airports are legally permitted to do when necessary), he wondered if he could put his expertise with raptors to work saving owls.

Frank contacted Janet, for whom he’d done programs in the past, and asked if she could set up a meeting with the managers of the Oshkosh airport. At that meeting, Frank offered to trap and relocate snowy owls and other raptors so there would be no need to shoot them, and so SOAR was born. Quickly trapping and relocating three owls, Frank’s work caught the attention of Austin Straubel International Airport in Green Bay, which approached Erin — also now part of SOAR — and asked her to work with Frank to do the same at their facility. Since then, SOAR has relocated 12 snowies from that airport.

In all, three of the owls that SOAR has relocated have been tagged by SNOWstorm team member Gene Jacobs — Straubel and Austin last winter, and Plainfield this season. In addition to the snowy owls, SOAR has this winter also relocated great horned owls, red-tailed hawks, a Cooper’s hawk and an American kestrel from the four Fox Valley airports with which they now cooperate.

It’s all volunteer effort, a lot of work in the cold (especially this winter, which has been brutal in Wisconsin). But as Frank says, “I hate to see these birds get dispatched if there’s a way that falconers and Audubon can trap them and relocate them. My goal is to eventually get more airports and more volunteers on board. We started Project SOAR to try to get the word out to more airports that there’s people willing to remove the animals from danger without killing them.” Frank and Erin will be speaking at a Wisconsin airport conference in May, hoping to recruit even more airfields into their efforts.

SOAR has a Facebook page, and is doing some fundraising the offset the costs of fuel, lures and additional Swedish goshawk traps (a live-trap design that works well with snowy owls) for use at mnore airports. We’re pleased to be working with Frank, Erin and SOAR to save snowies and learn more about their movements after relocation.

(For more information, here’s a story about their efforts from the Green Bay Press Gazette.)

Chasing Hardscrabble
A Sigh of Relief

6 Comments on “SOARing Away from Trouble”