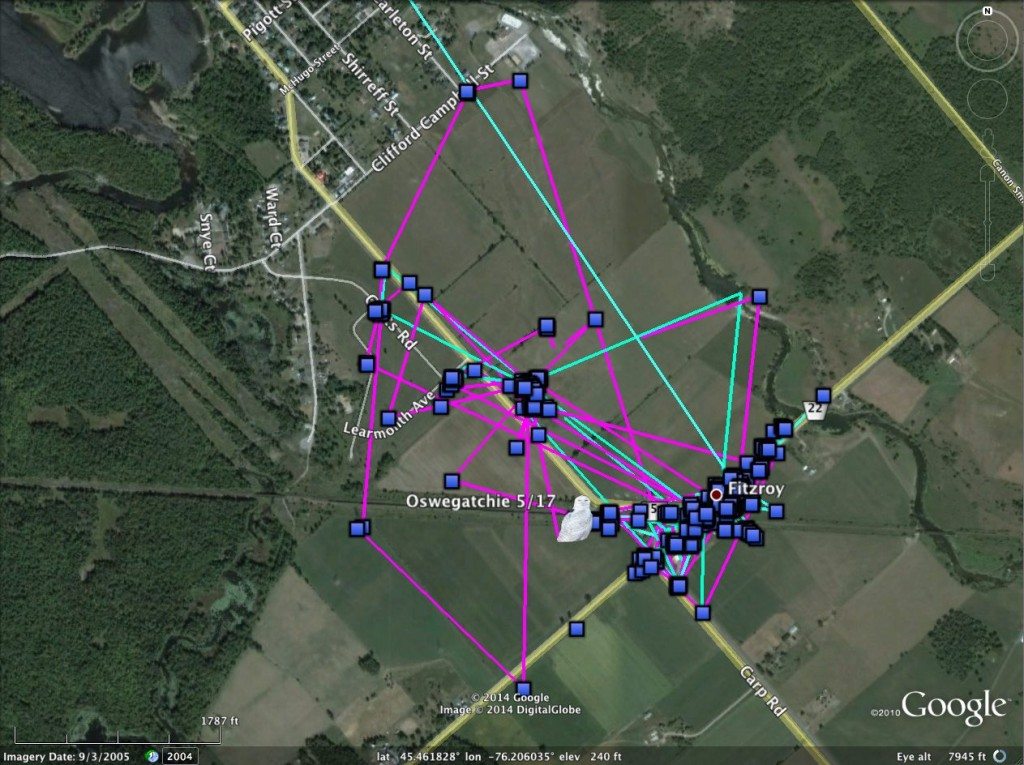 Last week, when Oswegatchie failed to check in on Wednesday the 14th, we assumed it meant he had finally headed north — but we jumped the gun.

The next day, Patricia and Daniel LaFortune — local SNOWstorm enthusiasts who had been keeping an eye on Oswegatchie — swung through that area and found him perched on a utility pole in much the same area he’s been using since May 4, near Fitzroy Harbour, ON.

His transmitter’s been charging to capacity, so I knew it wasn’t a voltage issue. A quick check of the cell tower map for the area showed something I’d overlooked — that despite its relative proximity to Ottawa, the area around Fitzroy Harbour has some significant gaps in cell coverage. Oswegatchie hadn’t gone north, he’d just been out of cell range when his transmitter tried to dial out on the 14th.

Saturday night he made up for lost time, checking in on schedule and downloading almost 250 locations from the previous six days — all of which will shortly be uploaded to his map.

You’ll notice that he’s picked just about the flattest, most open area southeast of town, where a railroad, high-tension electrical lines and roads come together, and bounded to the northeast by the Carp River.

How long will he stay? No way to tell — there are always a few snowies after a major irruption that linger into June, and over the years there have been a handful that actually oversummer down here in the south.

I don’t really expect Oswegatchie to do that, but Daniel and Patricia are continuing to monitor him, and he was still present as of yesterday in the general area. As long as he’s in touch, we’ll continue to update everyone.