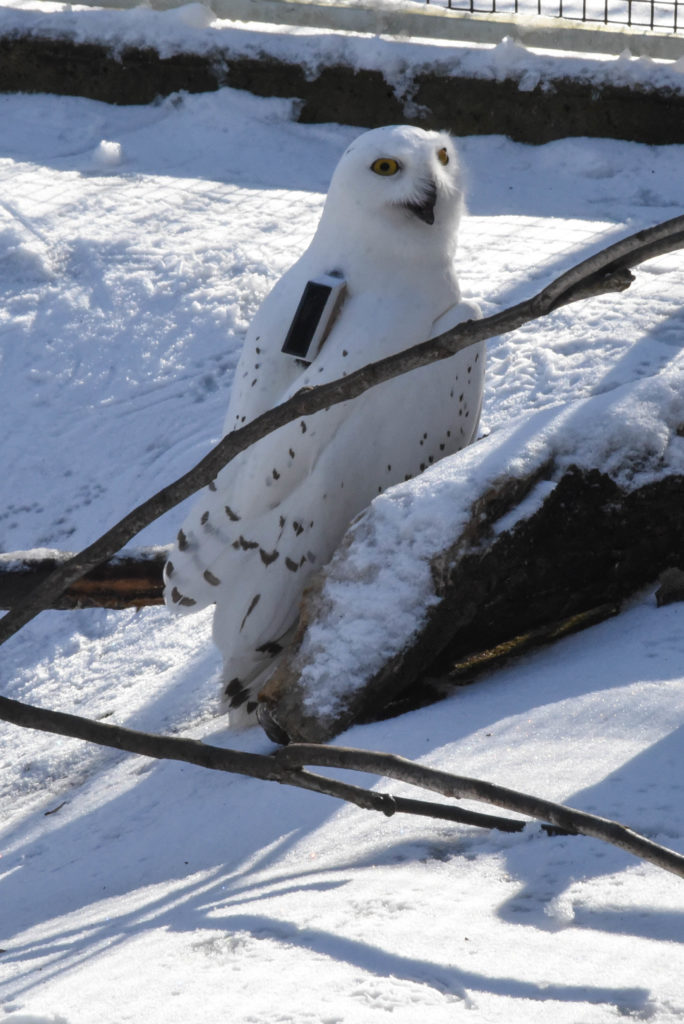 Before we decided to deploy a new transmitter case design, we tested it on a male snowy owl at the Maryland Zoo in Baltimore — where it passed with flying colors. (©Maryland Zoo)

The first winter we launched Project SNOWstorm, we were scrambling to adapt existing technology to a species that had only rarely been fitted with transmitters. The GPS/GSM units we use, which are manufactured by New Jersey-based Cellular Tracking Technologies, are about the size of a small matchbox, with a solar panel on the top. They weigh about 45 grams, or less than two ounces.

One of the first decisions we had to make was what kind of case design to use. That first winter, we based our choices on size, shape and fit using the only proxy we had at hand — a young male snowy owl that had died after being brought to a Pennsylvania rehabilitation facility, and which was sent to us. (After serving as our test subject, the specimen was prepared as a museum skin at a large teaching collection.)

The transmitter is attached with a harness of quarter-inch-wide woven tubular ribbon, either Teflon or another highly durable, low-rub synthetic called Spectra. The harness fits around the wings and body like a backpack, with the transmitter sitting high in the middle of the back, at the owl’s center of gravity. All together, everything — transmitter, harness, leg band — weighs no more than 3% of the bird’s body weight, a threshold which, based on decades of raptor telemetry, is widely accepted as safe. 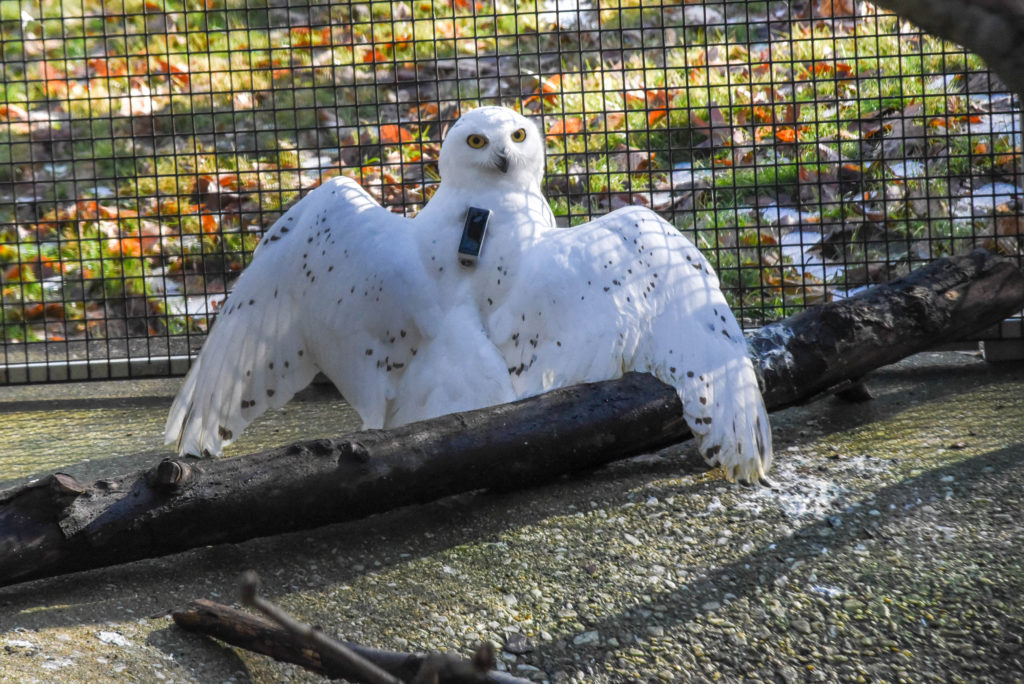 The owl with the test unit is checked regularly by zoo staff, both visually and for regular in-the-hand check-ups. (©Maryland Zoo)

Since then, we’ve learned a lot about what works well and less well in terms of transmitters on snowy owls. One big challenge is keeping the solar panel clear of feathers — snowies have especially deep, thick plumage, and some individuals in particular preen the transmitter deep into their back feathers. This compounds the other challenge with snowies; although they usually roost in the open, many of them habitually face the sun all day, so their backs — and their transmitters’ solar panels — are in the shade.

This year CTT proposed a couple of changes to the case design we use — making it a bit longer, narrower and higher, which should both make the unit even more stable on the bird’s back and also keep the solar panel away from occluding feathers. Changes in the 3D print manufacturing process also make the case significantly lighter, which is something we also welcome, because it reduces the already small load we’re asking the owl to carry.

Still, we don’t like rushing into things. So earlier this winter, SNOWstorm co-founder Dave Brinker of the Maryland Department of Natural Resources, and Dr. Ellen Bronson and avian collection and conservation manager Jen Kottyan, both of the Maryland Zoo in Baltimore, fitted a test unit to a male snowy owl at the zoo.

We were really pleased with how the test unit rides on the owl, and how it remains well above his feathers. Regular check-ups by the zoo’s animal care staff have shown no unexpected problems with fit or wear. We’re grateful to Ellen (who is part of SNOWstorm’s veterinary team, handling analysis of blood samples collected from the snowy owls we band and tag) and her staff at the zoo — and they welcomed the chance for their male to contribute to our understanding of his species.

The verdict? The new case design looks like a winner, and the next set of transmitters we receive this winter will use it.

A Yul-etide Visit
What Does Half a Million Owl Locations Look Like?

2 Comments on “Testing a New Design”