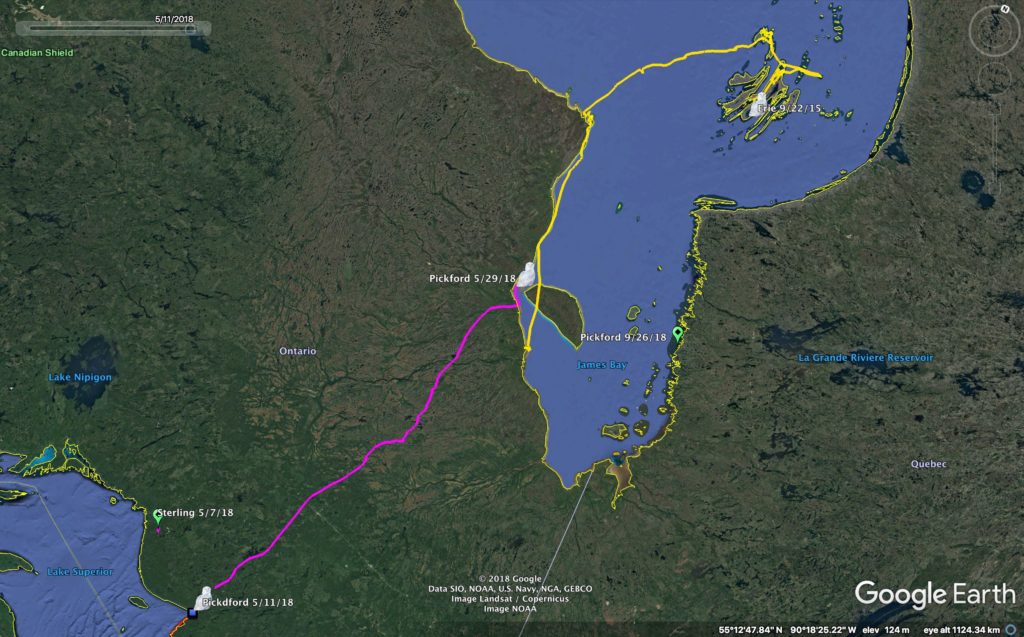 Here at Project SNOWstorm, we usually expect to start hearing from tagged owls around the middle of November, when the first snowies reach the northern edge of the Canadian cell phone network. But that edge keeps moving north, as more and more bush communities get cell service. That’s why we heard from Bancroft in late June near Churchill, Manitoba.

So maybe I shouldn’t have been surprised to get a text message on Sept. 26 that said, “CTT Data Update: Unit #46855274 (Pickford SY Female) has checked in.” But nevertheless I was — and so was Dave Brinker, who called me literally 30 seconds later, equally excited as he looked at his phone.

Pickford, you’ll recall, was the juvenile female tagged on Michigan’s Upper Peninsula last winter by Nova Mackentley and Chris Neri, wintering in Chippewa’s old territory. The last we’d heard from her was May 11, as she moved away from the easternmost shores of Lake Superior.

Now she was on the eastern side of James Bay, about 21 km (13 miles) north of the Cree village of Wemindji (also shown as Nouveau-Comptoir on some maps, and whose origins date to a 17th century trading post) — just close enough to connect to the village’s cellular network, apparently. Her transmitter uploaded almost 800 location points from her northbound migration in late May before the connection dropped; the last point we have is from May 29, when she was directly across James Bay on the west shore. We’ll have to wait for her to reconnect and continue to send her backlogged data in order to learn if she continued north to Hudson Bay or beyond, or if she spent the summer loafing around James Bay. (As a juvenile, she was almost certainly too young to breed this year.)

The good news is that her battery is in great shape, even as the days get dramatically shorter up there in the northern boreal zone. So if she stays near Wemindji, or continues farther south as winter comes on, we’re hopeful we’ll get her full summer travel history. 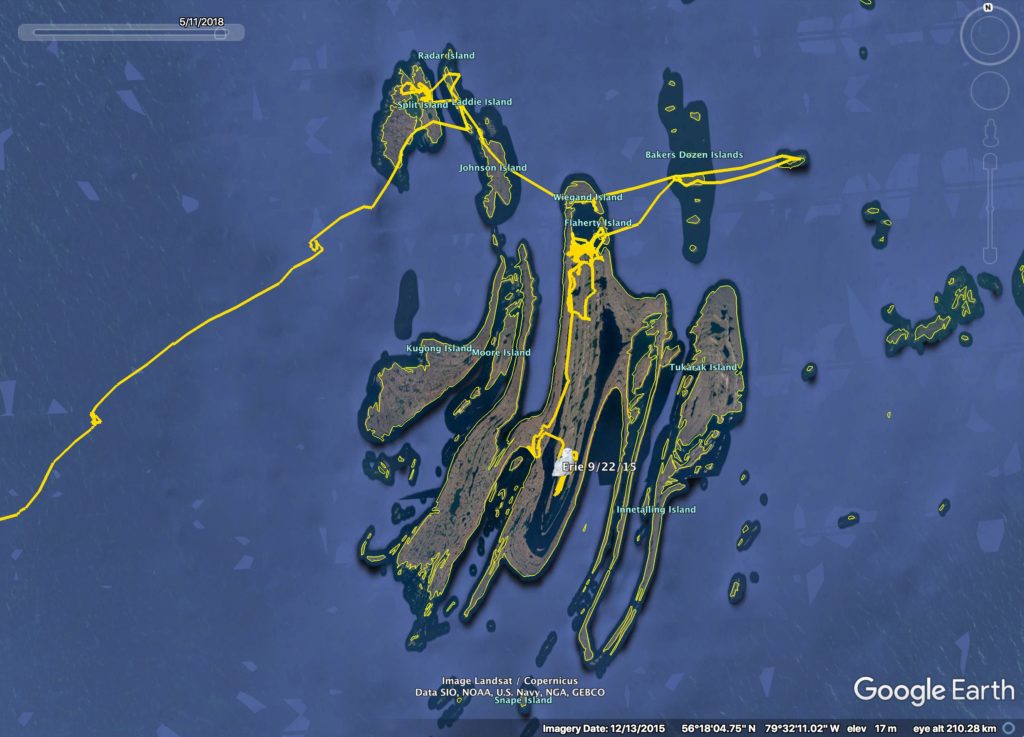 The Belcher Islands, looking like twisted taffy, are where Erie spent the summer and early autumn of 2015. (©Project SNOWstorm and Google Earth)

You’ll also recall that in June we lost one of our original owls — Erie, tagged in 2014 in Pennsylvania, and found dead in Michigan four months ago. The necropsy showed no clear sign of death but suggested head trauma, and his transmitter had a big, recent hole in its plastic shell, further suggesting he’d suffered an accident of some sort.

Because of the damage, we really didn’t expect to recover any additional data from his unit — but over the summer, the wizards at CTT were able to pull most of Erie’s 2015 summer data from the damaged innards of the transmitter.

The data show that in the spring of 2015 Erie migrated north along the west shore of James Bay, crossing southern Hudson Bay to the northeast and spending the rest of the summer and early autumn in the Belcher Islands, perhaps the most bizarrely shaped archipelago in the world, looking from space like stretched and twisted taffy. The islands are home to walrus, caribou and of course snowy owls — along with the Inuit village of Sanikiluaq, which once supported an eider down factory, collecting feathers from the abundant nests of common eider.

To judge from his GPS tracks, Erie was a common sight in Sanikiluaq that summer. Although he tended to stay just west of the village, he often came into town and perched on rooftops and utility poles.

It would have been great to recover more data from Erie’s transmitter, of course, but given the level of damage it had sustained, we’re delighted to have gotten such a big, additional chunk of his history — an important part of Project SNOWstorm’s past as well. 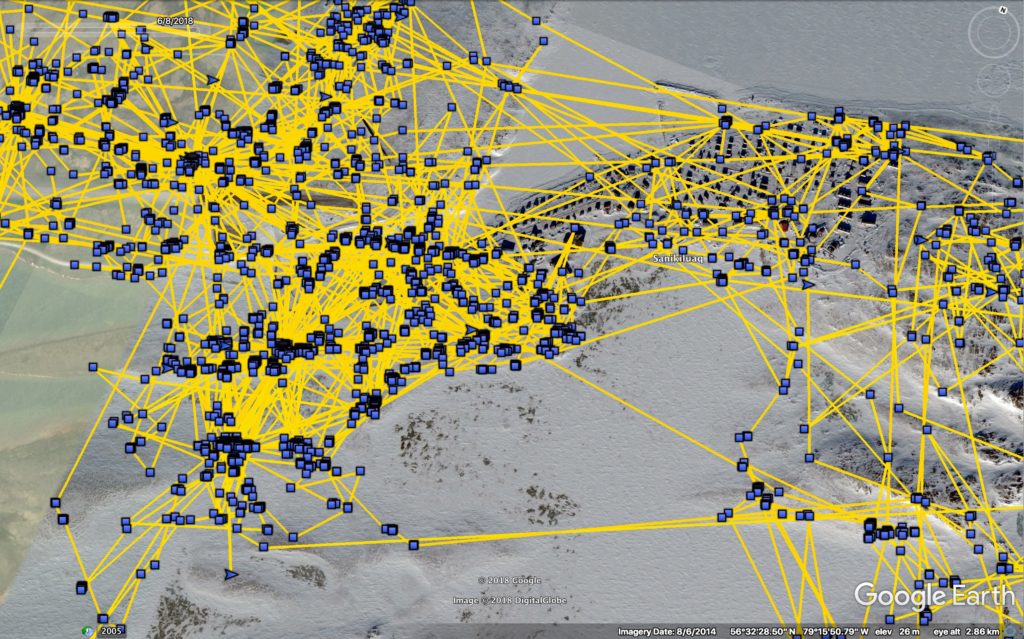 Sanikiluaq’s 900 or so residents would have seen Erie on a fairly regular basis in the summer of 2015, as his GPS tracks make clear. (©Project SNOWstorm and Google Earth)

Snowies on the Move
Tracking Young Snowies in the Arctic