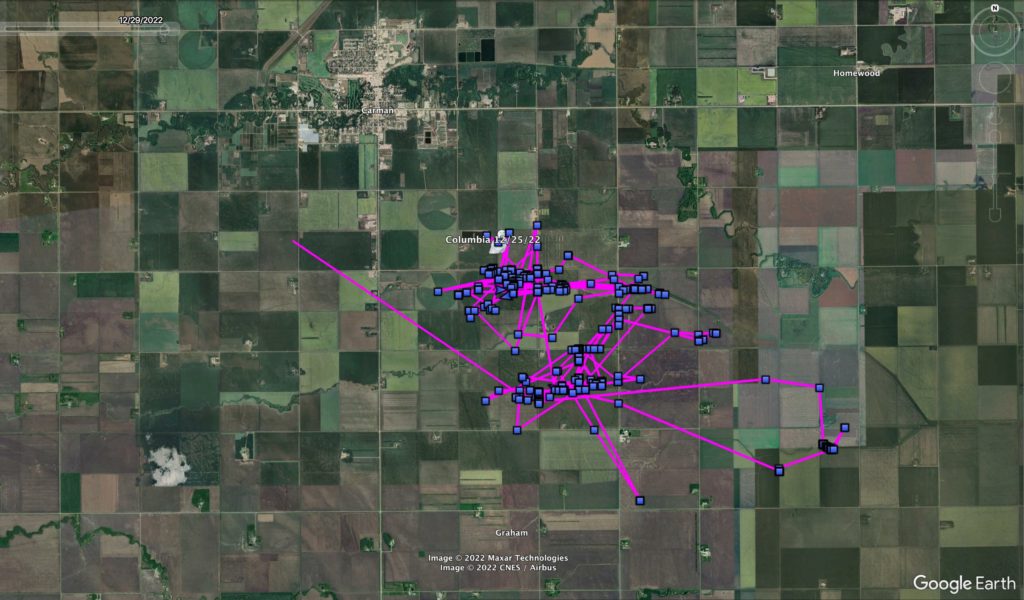 Here’s hoping everyone is enjoying the final days of 2022.

It certainly seems as though Columbia has found her spot for the winter, just southeast of Carman, Manitoba, where she’s been hanging out since the beginning of December. It’s always possible deeper snow cover may eventually force her farther south where hunting may be easier, but for now she seems pretty content. 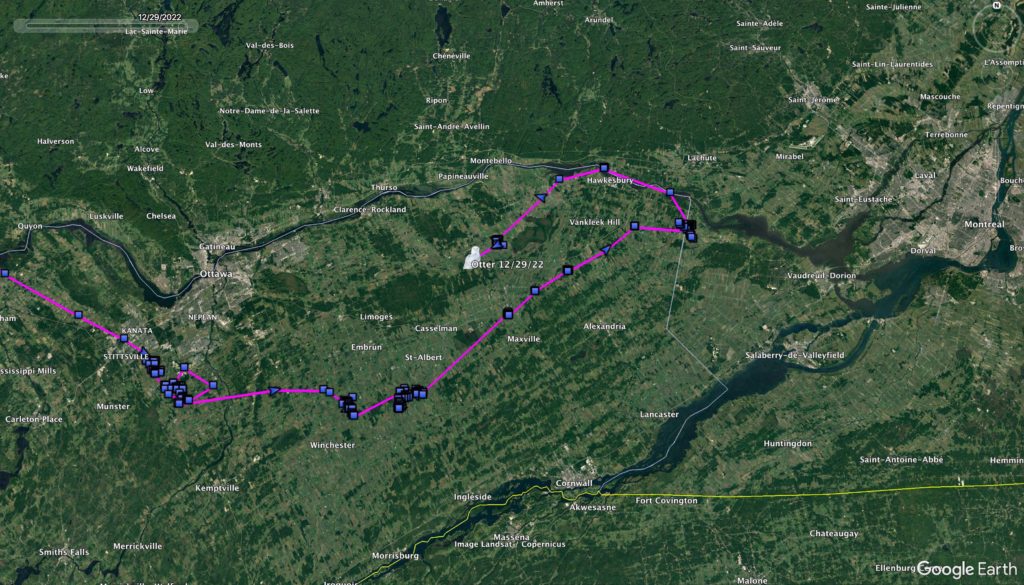 Otter appeared headed for Montréal when he doubled back this week. (©Project SNOWstorm and Google Earth)

Having just tipped a talon over the provincial border into Québec for a few days this week, stopping about 50 km (31 miles) west of Montréal, Otter reversed course and looped back west again. On Dec. 29, he was just south of Plantagenet, ON, part of a Franco-Ontarian (majority French-speaking) township south of the Ottawa River.

Columbia and Otter remain the only previously tagged owls to come back in cell range this winter. We’re working to get fresh transmitters deployed, but the low numbers of owls in this off-irruption year, and in some places the weather, have been working against us.

In eastern North Dakota, our longtime collaborator Matt Solensky from the U.S. Geological Service has been using his free time to check his favorite haunts for snowy owls. This winter on the northern Plains has been pretty slow so far; in early December Matt was able to easily trap an adult female, but once he had her in the hand it was clear she was rather thin, likely having just arrived after migrating south, and he opted not to give her a transmitter. He missed another other owl he was setting up on, and a trip to Bottineau, ND, just south of Turtle Mountain on the Manitoba border where a number of snowies were being seen, had to be canceled because of the massive storm system that battered much of the U.S. in the run-up to Christmas.

Meanwhile, over in southern Ontario our new banding team of Charlotte England and Malcolm Wilson have finally started seeing some snowy owls in their territory, and on Dec. 27 trapped a female snowy. While she was fairly large (and an adult, which we prefer to tag over juveniles because they’ve already passed through the most dangerous part of an owl’s early life), Charlotte and Malcolm felt she, too, was a little on the thin side — a body condition index of 2 on a 0-5 scale, which is assessed in part on breast muscle mass and subcutaneous fat. Our protocols call for a BCI of at least 3 in order to fit a snowy with a transmitter, so as much as we would have liked to have tracked this girl, they banded her and released her. 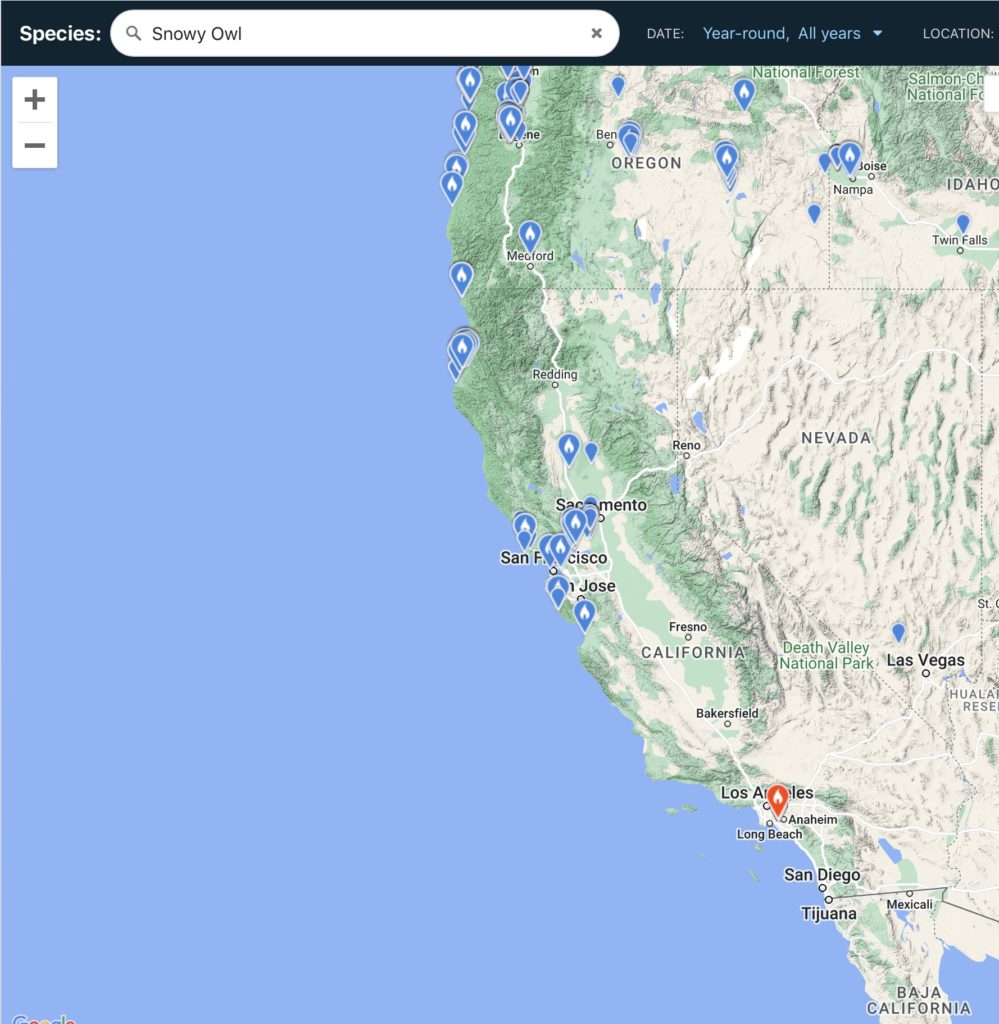 Historical records for snowy owls in California, all from Monterey north, except for the current (red) bird near Los Angeles. (eBird/Cornell Lab of Ornithology)

The biggest snowy owl news in the past week comes from an unexpected place — southern California.

Some months back a video of a snowy owl on a rooftop, reportedly from San Pedro, near the Port of Los Angeles, was posted to the iNaturalist website. Given the absence of previous records of that species so far south on the West Coast, there was initial skepticism about the veracity of the report, and an immediate assumption that, if valid, it likely represented an owl that rode a ship into the port. But there were no further observations, and the speculation died off.

Then on Monday, a video of a snowy owl from Cypress, CA, about 15 miles (23 km) east of the port, was posted to the California rare birds Facebook group, and this time the bird was quickly refound and verified. That also restarted the debate about its origins. There are California snowy owl records, all (so far as I am aware) from Monterey north, and all from years when there were big flights along the Northwest coast. That is not the case this year, when there have been no reports of other snowy owls anywhere south of Alaska or west of the coast ranges.

The assumption, again, is that this owl rode south on a ship from — well, no one can hazard a guess. A few have pointed out that snowies can cross long distances of open water, like the multiple records in Bermuda, or one that made it to Hawaii about a decade ago. But those incidents, again, generally coincided with big irruption flights.

Snowies do land on ships. During the irruption flight of 1945-46, ornithologist Alfred Gross documented more than two dozen cases of snowy owls landing on vessels in the north Atlantic, and in 2021 birders in Spain were agog when not one but three snowy owls showed up, the first ever seen in Spain, two of them close to a large and active port.

Whatever the California Bird Records Committee decides regarding the countability of the Cypress owl, it’s made a lot of SoCal birders very happy this holiday week.

How Does This Winter Stack Up?
Otter's Back on the Grid

8 Comments on “A Year-end Update, and an Out-of-Place Owl”