Happy 2023, a bit belatedly — I hope the new year is off to a peaceful start for everyone.

Columbia, off on the hunt. (©Ken Stewart)

Columbia certainly seems to have found her spot, and every check-in shows her using a fairly small 11 sq. km (4.25 sq. mile) area of farmland southeast of Carman, MB. That’s where Ken Stewart, an amateur wildlife photographer, encountered Columbia on Jan. 1 and was able to get a series of photos of her, which he was kind enough to share with us. Her transmitter is riding well and staying above her back feathers, which explains the good solar charge it’s maintaining despite what the photos suggest is some gloomy winter weather. 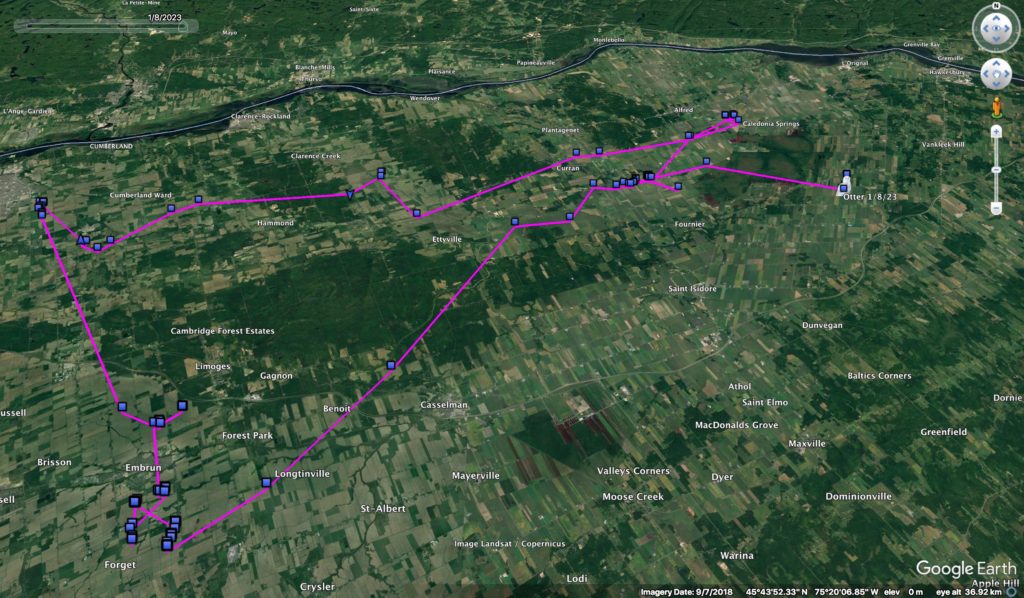 Round and round he goes: Otter’s route over the past 10 days. (©Project SNOWstorm and Google Earth)

Otter hasn’t been in a mood to settle down; he’s been roaming back and forth across the farmland east of Ottawa and south of the Ottawa River since arriving there in mid-December, and doesn’t seem inclined to stop. As of Jan. 8 he was near the village of St-Bernardin, ON, but he’d flown some 52 km (32 miles) in the previous two days, and I suspect he’ll keep wandering.

We’ve mentioned here before how remarkably slow this winter is compared with most recent seasons. Last Friday, during our weekly SNOWstorm team Zoom meeting, Norman Smith in Massachusetts reported that only three snowies have been seen at Logan Airport in Boston, where he traps and relocates owls, a very low number for early January. (By contrast, during the big 2013-14 irruption Norman caught and moved more than 150 owls at Logan.) A local Massachusetts Christmas Bird Count recorded just one, a new low record, Norman told us.

Drew Weber, whose day job is running the Merlin project at the Cornell Lab of Ornithology, emailed me shortly after the meeting with a striking visual that shows how unusual this winter is. Drew took eBird data for the past 19 winters, including this one thus far, and plotted snowy owl reports in a graph, shown below. He highlighted the 2013-14 irruption (green), which is obviously a huge outlier — many of us suspect that was the largest irruption since at least the 1920s. 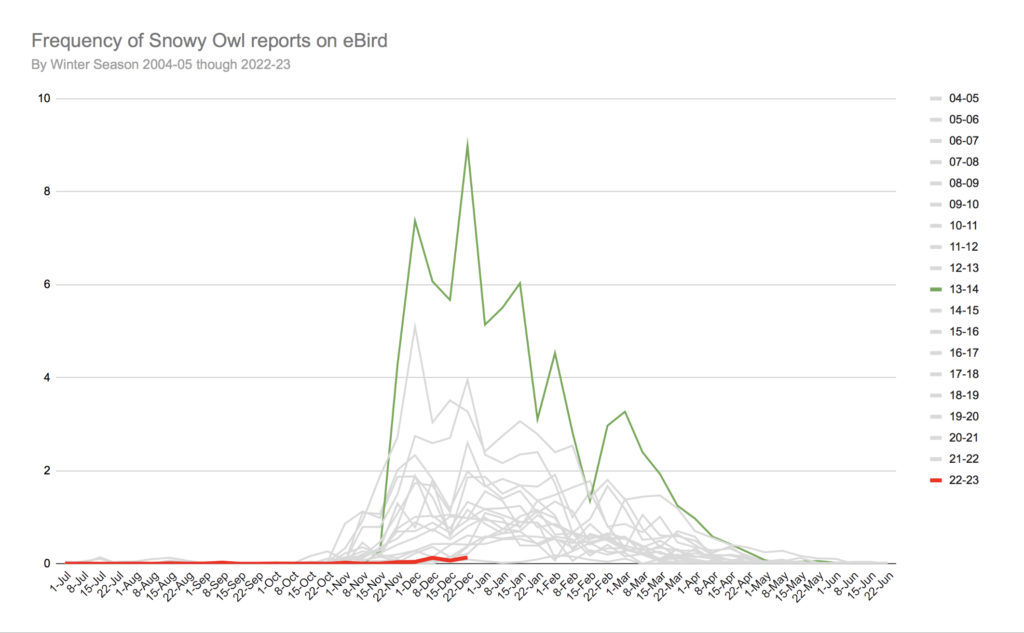 How slow is this winter? The 2013-14 irruption is in green, this winter in red. (eBird, Cornell Lab of Ornithology)

But in red, you can see that this winter is a virtual flat-liner so far. Why? It could be a number of reasons. We know that, with the exception of the tip of Ellsemere Island in the Canadian Arctic, there were no known concentrations of nesting snowy owls in Canada last summer, unlike the productive breeding season in 2021. In Utqiagvik (formerly Barrow), Alaska, Denver Holt’s Owl Research Institute team found more than 50 snowy owls on territory last summer, but located just a single nest; Denver isn’t sure why the rest  didn’t breed.

There’s also some concern about the impact that highly pathogenic avian influenza (HPAI), which exploded across North America last winter, has had on snowy owls. We know that quite a few snowy owls were confirmed dead from HPAI in New England and elsewhere; Denver has said that at least one was confirmed this year in Utqiagvik. We apparently lost several of our owls last spring, including Bleuet, who apparently died on her way north through southern Québec in mid-April, and possibly our old veteran Stella, whose transmitter went stationary and intermittent in central Saskatchewan in late spring. In neither case were we able to recover the owls and determine a cause.

That said, we shouldn’t lose sight of the fact that extremely low winters like this do happen. Look more closely at that graph showing the past 19 winter seasons, and you’ll see that there was another year (in gray, at the bottom) just as poor as this one has been so far. That was the winter of 2010-11, and while there were relatively few eBirders in those days, compared with now, the frequency-of-sighting stats here are corrected for effort and should be comparable between the years. So a winter as poor as this one was followed, two years later, by the biggest irruption in generations. That’s a hopeful coda for this discussion.

Howdy, Huron!
A Year-end Update, and an Out-of-Place Owl

9 Comments on “How Does This Winter Stack Up?”