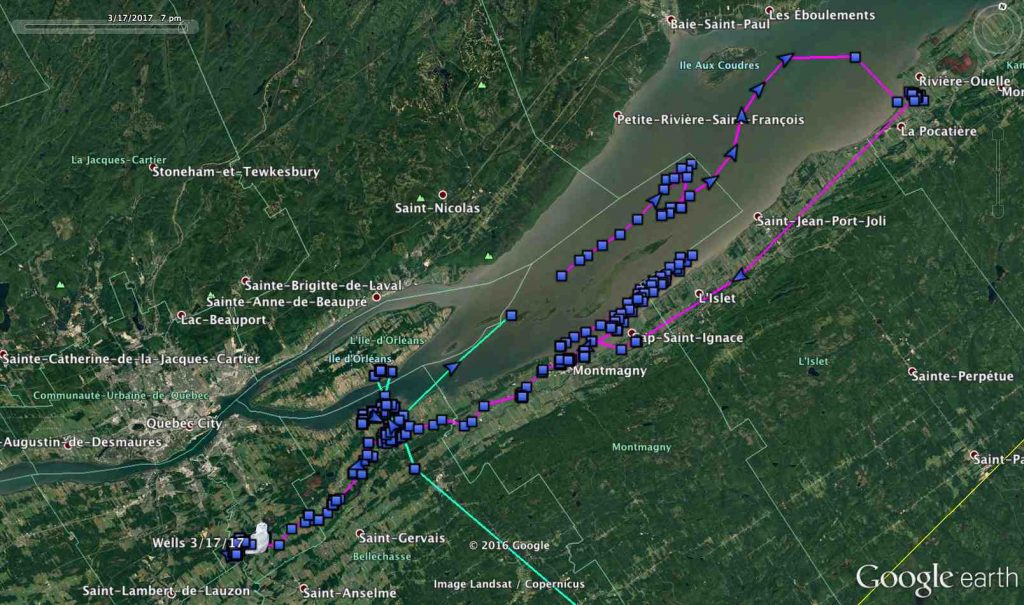 Wells’ movements over the past two weeks, floating down the St. Lawrence River, then heading back to the southern shore in Quebec. (©Project SNOWstorm and Google Earth)

We expect to see some restlessness as the spring days get longer — even after a major snowstorm, which much of the Northeast this past week. And we saw some of that behavior this time, along with transmissions from a couple of AWOL owls.

After skipping a week, Dakota came back online after some sunshine on the Canadian prairies, and uploaded more than 600 GPS points — all of them on her long, narrow winter territory near Francis, SK. Chase Lake down in North Dakota continues to use the farmland and prairie near Woodworth, including some big center-pivot irrigated fields.

Wells also came back within cell range, having been out in the mouth of the St. Lawrence River in Quebec for the better part of a week, hanging out on the ice — not something our tagged birds have had much of an opportunity to do this year. 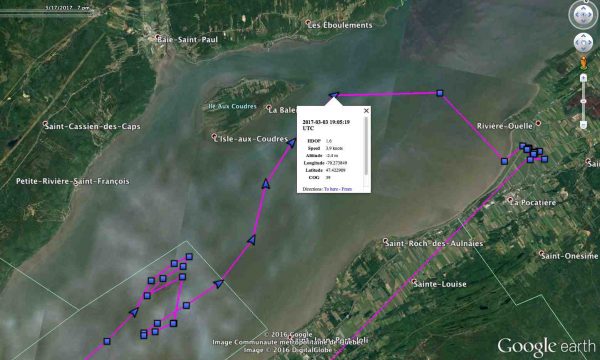 A close-up of Wells’ progress on the St. Lawrence, floating down the river (presumably on an ice floe). (©Project SNOWstorm and Google Earth)

As we’ve noted in winters past, snowies could as easily be named “ice owls” for their fondness for lake- and sea-ice. This winter, with near-record lows for Great Lakes ice cover, has afforded few opportunities for them to indulge their passion. Wells, however, hitched a ride on ice floes moving northeast on the river on March 3, traveling about 23 km (14 miles) over the course of one afternoon as the ice drifted down the current toward the gulf, before flying back to land near Rivière-Ouelle, Quebec, on the south shore.

From there she moved back west along the southern shore of the St. Lawrence, using shore ice near Cap-Saint-Ignace, then moving farther west and inland to farmland near Saint-Henri, where she was Friday night when she last checked in.

Favret continues to hunt the easternmost shore of Lake Ontario near Belleville and Ellisburg, NY, moving between high, open farmland and several bays and coves along the shoreline. Oswego is still a no-show, whether because her transmitter is off or some other reason, we can’t say.

To the north, there’s been no further sign of Baltimore on his territory since March 8, and the other snowies that had been in the same area around Kinburn, Ontario, all winter have also moved out. But Hardscrabble is making some interesting movements, after sitting tight and predictable all winter near Cobden, ON. 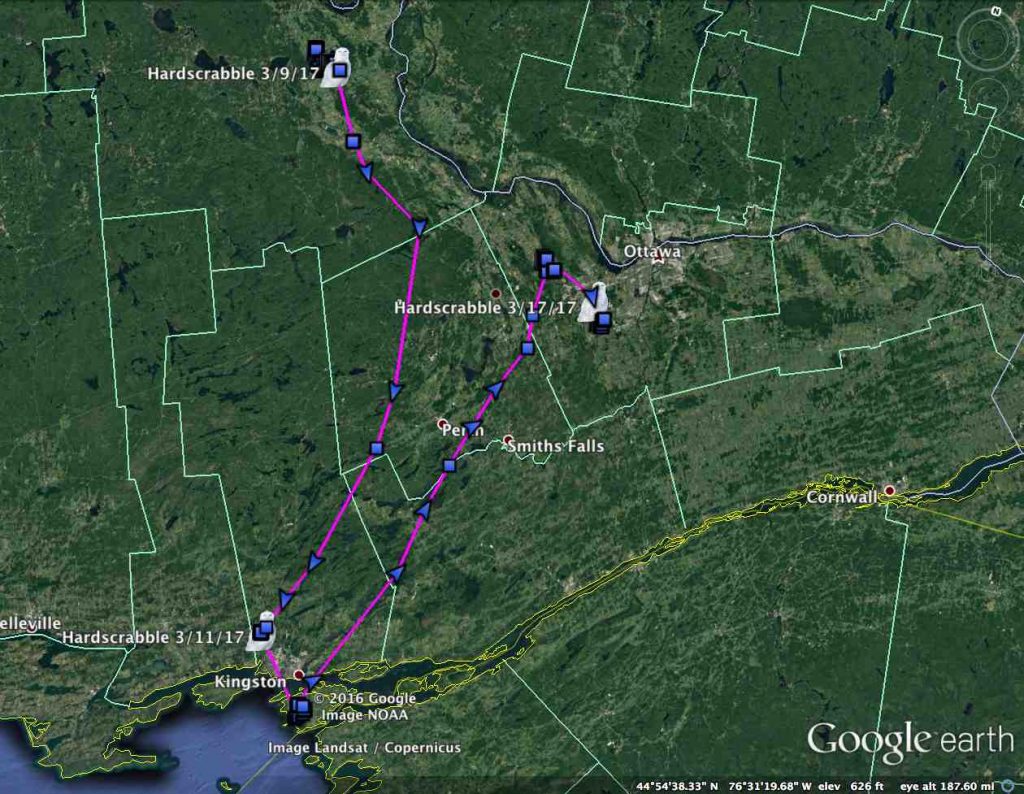 Hardscrabble can’t make up his mind — south, then back north again (and eerily close to the home of his biggest fans). (©Project SNOWstorm and Google Earth)

As we noted in the last update, he’d suddenly flown south almost to Lake Ontario last week. This time, we learned that he’d made a brief visit to Wolfe Island, right on the ON/NY line, then flew back northeast again to the outskirts of Ottawa — just a few kilometers from where our tireless snowy-trackers Daniel and Patricia Lafortune (who have been keeping tabs on Hardscrabble and Baltimore all winter) live.

I joked that if they heard talons on the rooftop, they’d know the hunters had become the hunted. In fact, they found Hardscrabble the next day and got some photos of him from a distance. He’s in an area with a number of other owls, where professional photographers and their clients have been baiting owls this winter — a controversial practice there, as in other places. 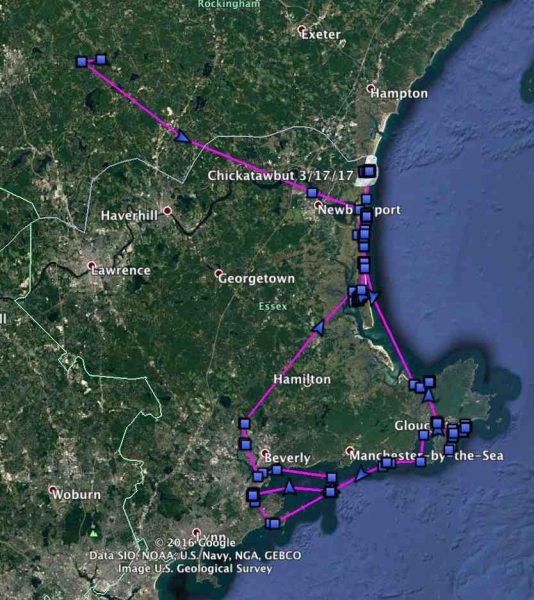 After feinting toward New Hampshire, Chickatawbut looped back to the Massachusetts coast — but thankfully stayed away from Logan Airport in Boston, where she’d been caught. (©Project SNOWstorm and Google Earth)

Finally, Chickatawbut made a big loop across coastal New England last week. The day after she was tagged on March 8, she had headed northwest into New Hampshire, but this transmission showed that she soon reversed course and headed back to her release site at the mouth of the Merrimack River in northern Massachusetts.

From there she flew south, to Gloucester, then the Marblehead Peninsula and Salem (no witch jokes, please), including time on Baker Island in Salem Harbor. In the predawn hours of March 14, she flew back north again, and on the 16th was hunting the tidal marshes of Salisbury Beach.

As always, the maps for all these movements (and all the tracking data for all of our owls since 2013) are as close as a mouse-click — enjoy!