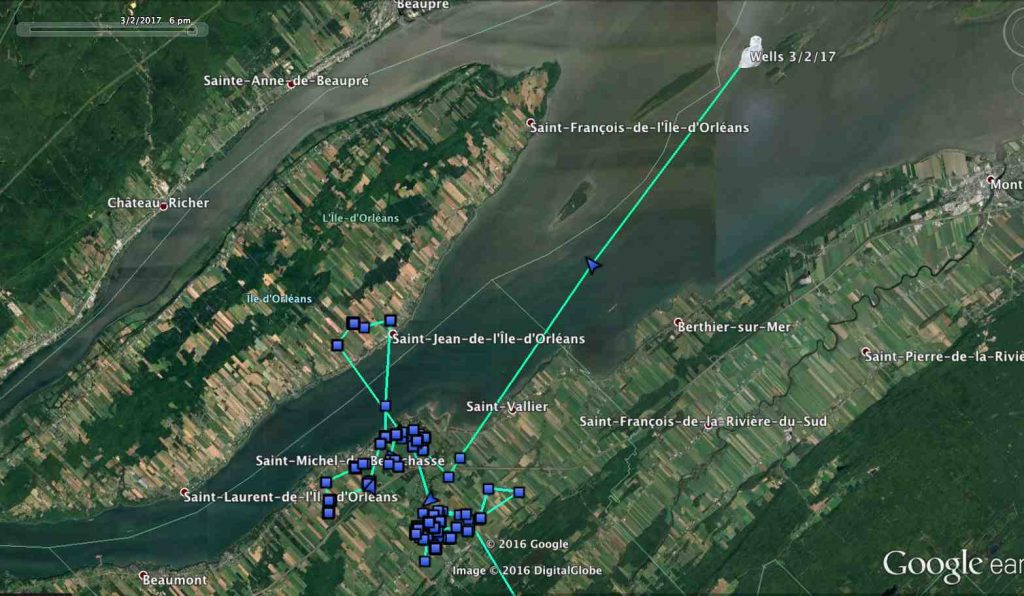 The start of another migratory bout, or just stretching her wings? Wells made a 21.5 km/13.5 mile flight into the St. Lawrence just before checking in last week. (©Project SNOWstorm and Google Earth)

It was a pretty quite week on the tracking front, with all of our owls — those still on winter territory, and those that have started to migrate — just biding their time.

Out west, Dakota and Chase Lake remain on their respective territories in Saskatchewan and North Dakota. Oswego failed to check in again this week from her namesake town in New York, and Tom McDonald is looking into that — we’re not sure if we have a technical issue, or if something’s happened to the owl. Favret, our newest owl, was on Wolfe Island in eastern Lake Ontario.

Hardscrabble continues to circle his huge woodlot near Cobden, Ontario, and Baltimore was seen as recently as March 1 near Kinburn, ON — more about him in the next update.

Finally, Wells continued to move between the south shore of the St. Lawrence River and L’île-d’Orléans in southern Quebec, just east of Quebec City. Interestingly, about an hour before her transmitter checked in Thursday night, she started flying northeast across the St. Lawrence, and at 7 p.m. that evening she was on the ice (presumably) near Grosse-île, 21.5 km (13.5 miles) from where she’s been since Feb. 21. The start of a new bout of migration? We’ll have to wait until her next transmission later this week to find out.