This winter has been dominated mostly by news of our many returning snowies, with only three newly tagged owls, all relocated from the Montréal airport — Aimé, who immediately returned to the airfield and was killed by the back-blast of a taxiing jet, and Nicolet and Odanak, both of whom also returned to the airport but have thus far mostly remained off the runways. It’s been a challenging trapping winter otherwise.

But in the past two weeks we’ve added three newly tagged owls, including two in upstate New York — though none of them have behaved the way we wanted them to, showing how strong the homing instinct can be once a snowy owl has established its winter site.

Several times this fall, veteran snowy owl bander Tom McDonald and his team, including bander Melissa Mance-Coniglio, have tried trapping snowies that were wintering at the Frederick Douglass Greater Rochester International Airport in Rochester, NY. An attempt in late January resulted in a number of close passes by the owls but no capture, but on Feb. 10 Tom and his team captured an adult female at least six years old, based on her molt, and tipping the scale at a plump 2,132 grams (4.7 pounds). Nicknamed Roc, for the Rochester airport, she was fitted with one of our standard GPS/GSM transmitters from CTT and transported 55 miles (87 km) southeast to the Finger Lakes farmland between Seneca Lake and Lake Cayuga. 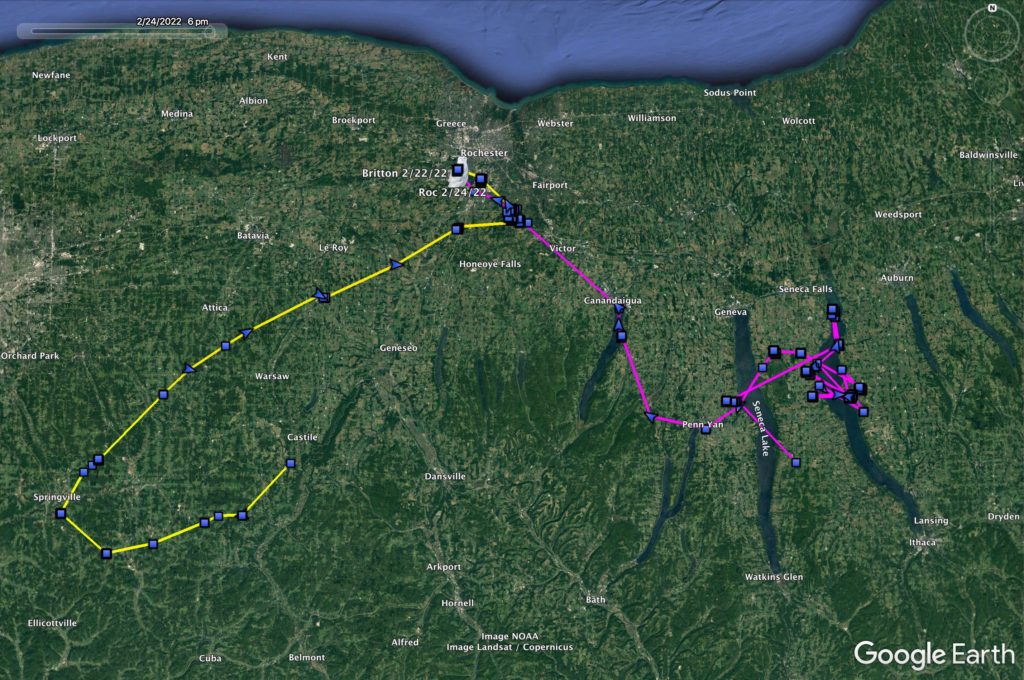 It took Roc almost two weeks, but both she and Britton wound up back at the Rochester airport. (©Project SNOWstorm and Google Earth)

Two days later, on Feb. 12, Tom and Melissa’s team captured two additional owls at the airport, and moved both of them 41 miles (66 km) southwest near the Genesee River in Wyoming County, NY. One of them, an immature female, was fitted with a transmitter and dubbed Britton, named for historic Britton Field, the 1919 forerunner of the Douglass-Rochester airport. (The other owl, a juvenile male, was banded but released without a transmitter.) An adult male at the airport has thus far eluded capture, but we’re still hopeful Tom’s crew may catch and possibly tag him as well. 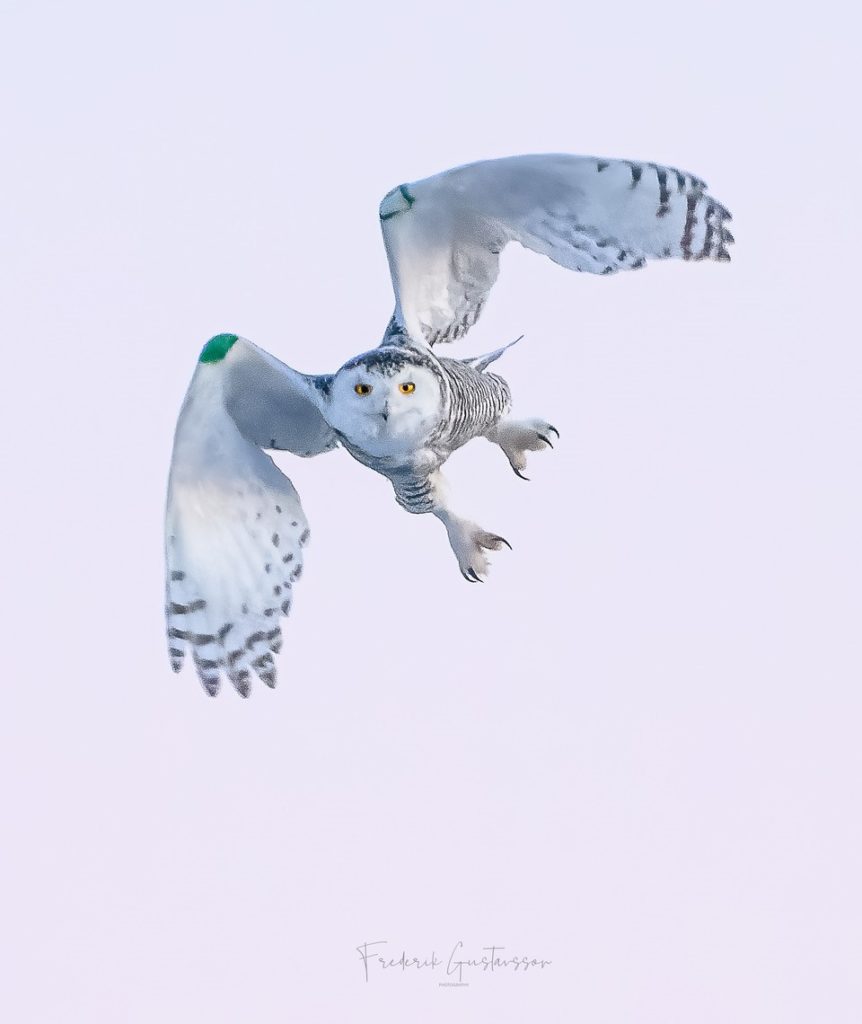 Bleuet, her wing joints dyed green like all owls relocated from the Montréal airport, on the attack. (©Frederik Gustavsson)

Finally, on Feb. 16 the biologists at Falcon Environmental in Montréal recaptured an immature female, first trapped at the Trudeau-Montréal airport Jan. 3 and relocated far away. (At that time, as with all of their relocated owls, Falcon marked its wings with temporary green dye so it could be identified at a distance if it showed up again.) This time Dr. Guy Fitzgérald at the University of Montréal fitted her with the undamaged transmitter recovered from Aimé, and she was released later that day 66 km (41 miles) away in agricultural lands northeast of the city, on the north shore of the St. Lawrence between Joliette and Trois-Rivières. She’s been nicknamed Bleuet for the abundance of blueberry fields near her release site. 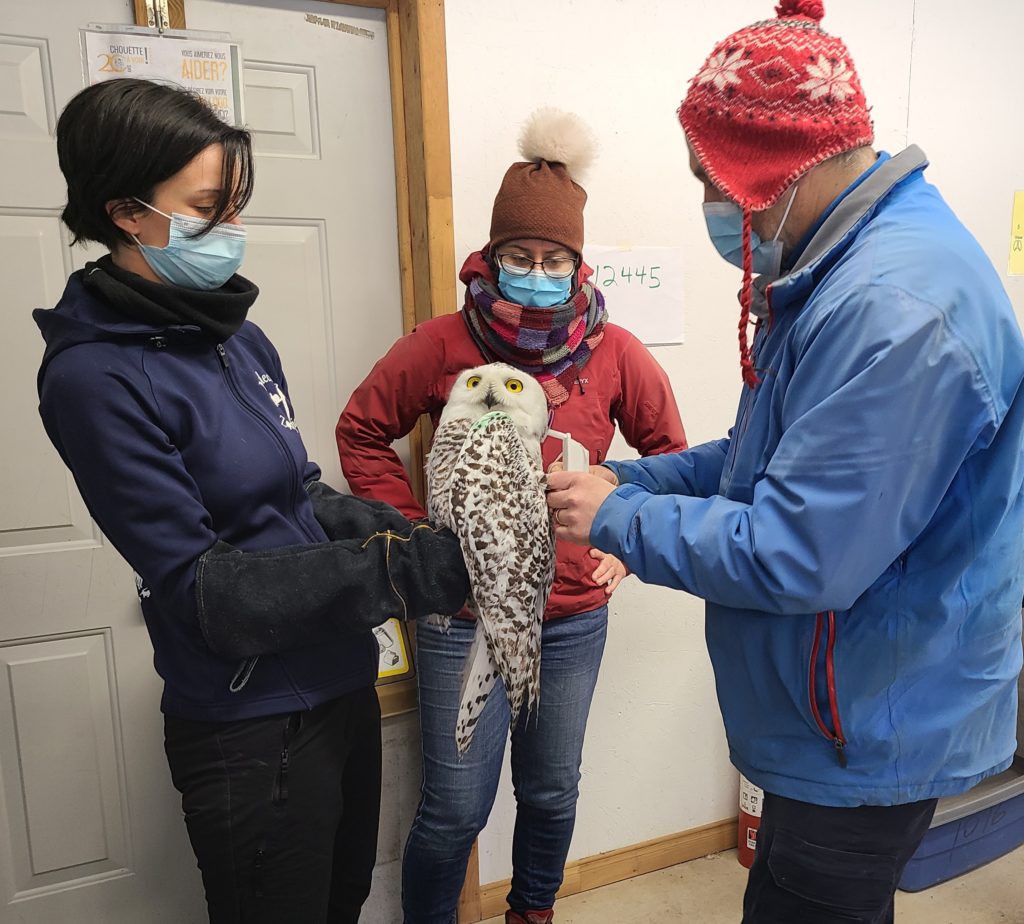 Not that Bleuet stayed there long — in fact, maybe we should have dubbed this trio Boomerang 1, 2 and 3. Bleuet wasted little time, and within three days she was back at the airport, where she joined Nicolet, Odanak and Hochelaga — and unlike those three, she spent most of her time near the active runways. It took Britton eight days, and a looping flight first southwest and then back northeast, before she returned to the Rochester airport. Because Roc remained for nearly two weeks near her release site, we were hopeful she’d stay put, but Feb. 23-24 she also flew back to the Rochester airfield. 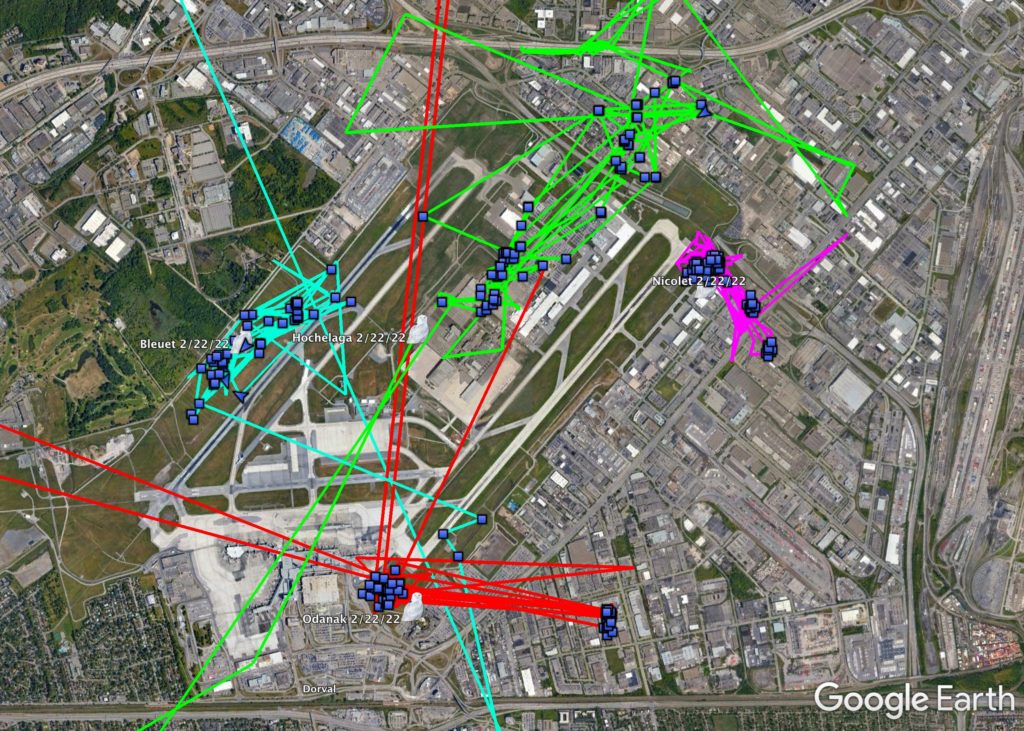 Here’s a quick update on everyone else we’re monitoring this winter.

As noted, Nicolet, Odanak and Hochelaga remain on and around the Montréal airport, although Odanak has flown as much as 14 km (9 miles) away to spend some ice-time on Lake of Two Mountains, and also to the Saint-Laurent neighborhood to the north of the airport. Nicolet and Odanak have staked out relatively small territories at either end of one of the three main runways, where there is a lot of grass; Nicolet in particular rarely stirs from her 30 hectare (75-acre) activity range, which includes the margins of a  highway that runs under the east end of the airport. Neither she nor Odanak seem to encroach much on the runway, but their proximity is obviously worrisome, and as with any of the boomerang owls, if they can be retrapped they’ll be moved again.

Hochelaga is mostly hanging out on and around the big hanger buildings surrounding the airport, in the industrial neighborhoods to the northeast and along the Trans-Canada Highway that runs close to the airport.

Yul, named for the Montréal airport’s alpha code YUL, remains blessedly far from her namesake, once again this winter sticking close to her 2020-21 territory on the south side of the St. Lawrence in quiet farmland. Likewise, Wells has been regular as clockwork in her usual haunts in Québec City, and Otter hasn’t made any flights away from his choice spot this winter near Lake Abitibi in western Québec. 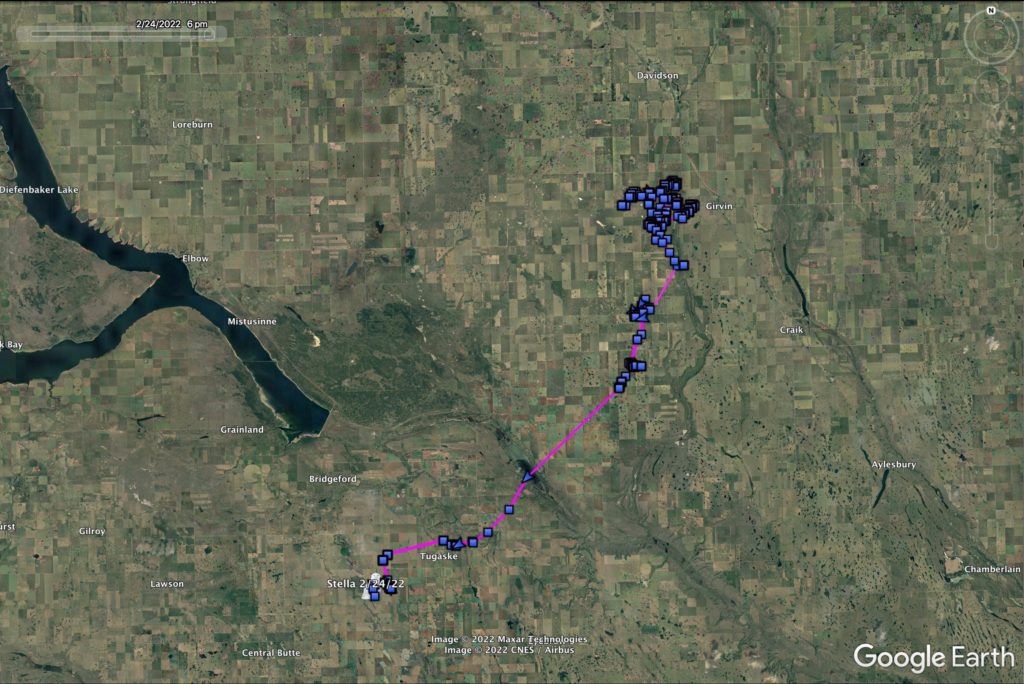 Stella’s moved southwest a bit, to near the Qu’Appelle River Dam in southern Saskatchewan. (©Project SNOWstorm and Google Earth)

In the northwest of Michigan’s Lower Peninsula, Fond du Lac seems to really like it near the Crown Golf Club and the homes adjacent to it near Traverse City. On the other hand, Columbia’s been moving around a fair bit north of Fargo, North Dakota, and Stella moved about 43 km (27 miles) southwest from where she’d been all winter near Craik, Saskatchewan, to near the Qu’Appelle River Dam. Such late-winter movements are common as the lengthening days start working on the owls, and we’ll probably see more of them in the coming weeks.

Romulus (No Remus, at Least Not Yet)
Zooming in on Otter