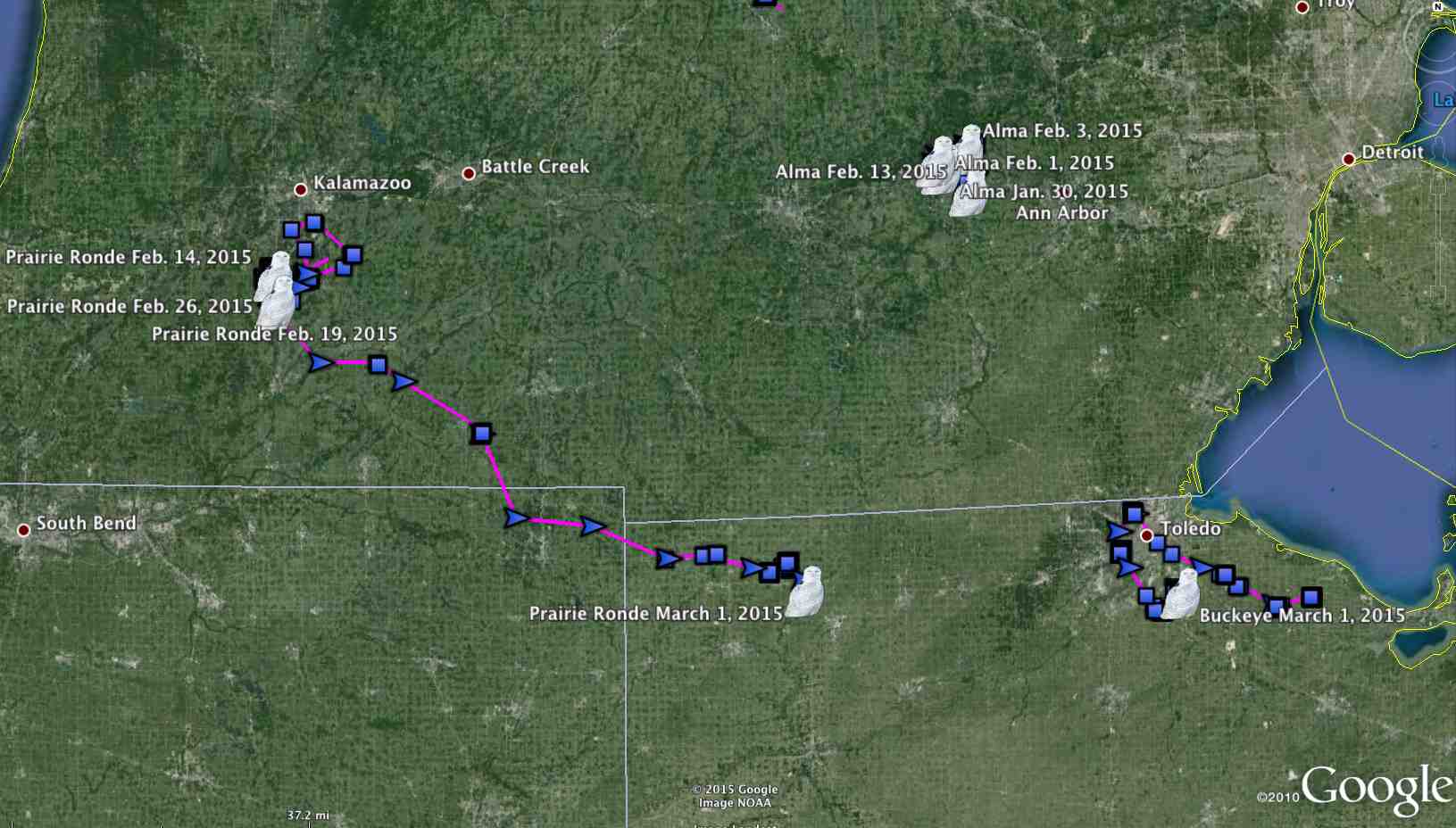 Prairie Ronde’s big push into Ohio, with the wintertime tracks of Alma to the north, and Buckeye to the east. (Project SNOWstorm and Google Earth)

Yesterday we shared the news about our two latest transmitter owls, Geneseo and Orleans. Now we have an update on how everyone else is doing, based on the last two check-in periods.

Let’s start west and work our way east, beginning with Goose Pond in Columbia County, Wisconsin. This adult male has moved about three miles (5 km) south of his release site at the Goose Pond Sanctuary near Arlington, and has been hanging out near the Dane County line.

If you go to his interactive map (by clicking on his name above) and zoom in on his locations for the past week, you’ll immediately notice that he’s not randomly picking spots in empty fields — his roosts are invariably on utility poles or in the heavily vegetated strips (probably drainage ditches) separating plowed fields.

The biggest movements of this past week were from Prairie Ronde, the adult female trapped at the Saginaw, Michigan, airport and relocated south of Kalamazoo on Feb. 11.

After spending a couple of weeks in a narrow area about six miles (10 km) long near her Schoolcraft release site, she made a big, looping trip to the north about 12.5 miles (21 km), stopping briefly at the Kalamazoo airport.

By Feb. 26 she was back near Schoolcraft, but that night she took off to the southeast, crossing the extreme northeastern tip of Indiana and winding up in Williams County, Ohio, north of West Unity and only a few miles south of the Michigan border. She spent Feb. 28 there, but on the morning of March 1, when her transmitter checked in, she was moving farther south into Ohio. In all, she covered more than 90 miles (145 km).

To her north, Alma did not check in the past two cycles. This could be because he’s in a cellular dead zone, though his battery voltage had been nearing the threshold when it cuts off cell transmission (which takes a lot of juice) and focuses instead on just storing up GPS locations. Mid-winter is always tough on solar-powered units like ours, and the traditionally cloudy weather in the Great Lakes makes it harder. We expect to hear from Alma again in the coming weeks as the sun angle and day length increase dramatically, probably with a lot of his stored data.

Up in the UP of Michigan, Chippewa still really loves her little corner of heaven, rarely flying more than a third of a mile (.5 km) from her favorite barn-roof perch.

Buckeye, a relocated airport owl from Detroit that was moved to northwest Ohio, unfortunately remains enamored of the Toledo Executive Airport near Walbridge, where she’s been since Feb. 17. While it’s better than Detroit Metro, from which she’d been moved twice before, it’s still a hazardous spot for her, and we’re keeping our fingers crossed that she stays safe.

Millcreek remains on his winter territory in the suburbs of Toronto, just north of the Pearson Airport; and as been the case all winter, he’s staying clear of the airport. (Hello, Buckeye — you paying attention?) Almost all of Millcreek’s movements are nocturnal, probably because he’s roosting on the rooftops of office buildings, trucking centers and small factories, where no one is bothering him. At night, he moves west to the Highway 407 corridor and its adjacent high-tension electrical right-of-way, where the rodents must be plentiful.

We’ll skip over Geneseo and Orleans in upstate New York, whom we just discussed on our last post. Chaumont’s transmitter seems to be in hibernation because of the short days, cloudy weather and his habit of preening his back feathers over the solar panel — something a few snowies habitually do. But his bander, Tom McDonald, again had a visual on Chaumont last week, still in his small territory along the Chaumont River just east of Lake Ontario. (Once the sun gets high enough to restore a healthy charge, we should get a lot of Chaumont’s stored data.) 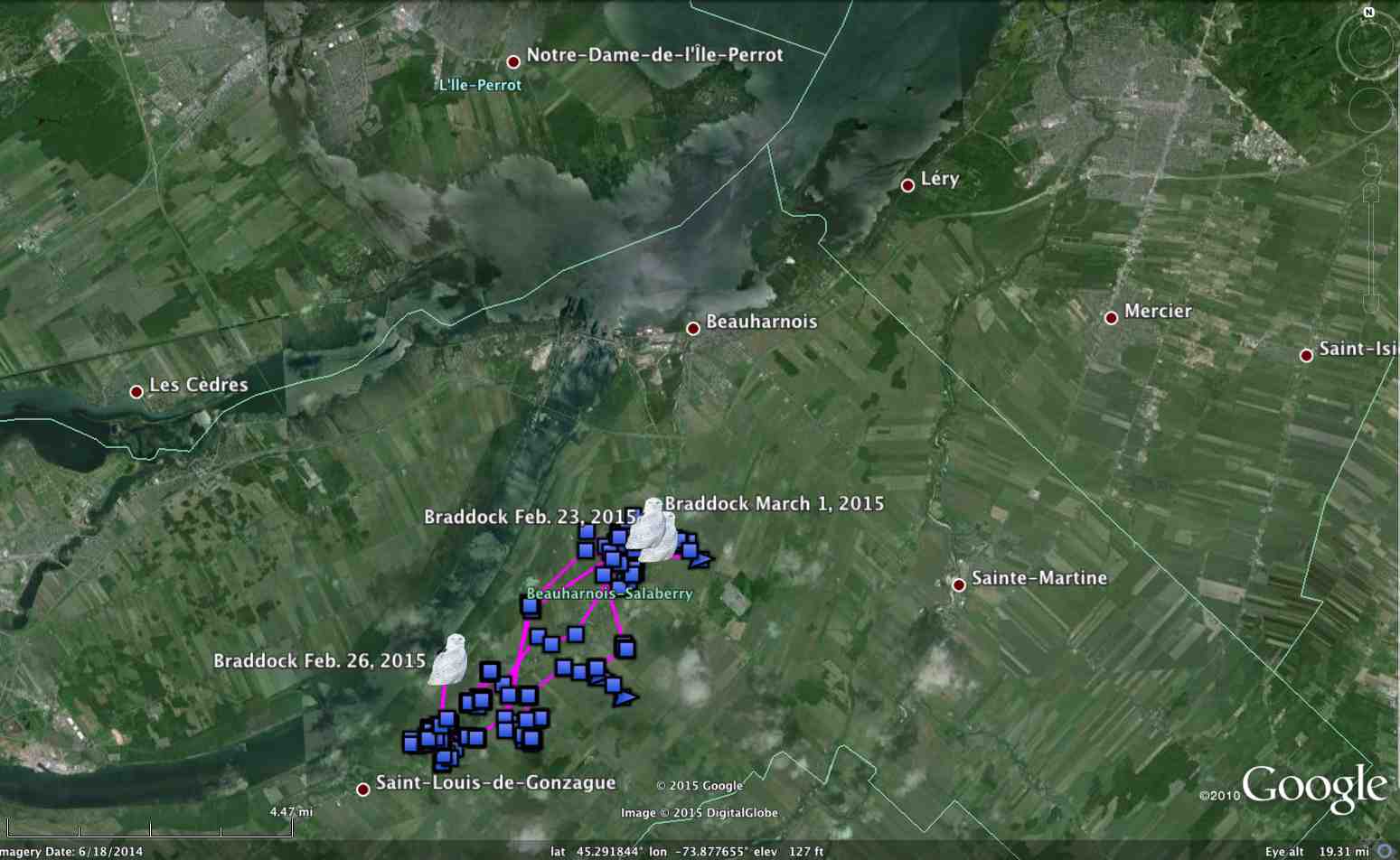 Braddock, like Millcreek another of our returning 2014 owls, is near Saint-Louis-de-Gonzague in southern Quebec, about 40 km (25 miles) southwest of Montreal, along the St. Lawrence River. It’s an area of small farms and quiet back roads, and quite a change from the Lake Ontario ice where he spent much of last winter.

On the coast, Monocacy has not checked in the past two cycles, since Feb. 19 when she was at Bayonne, New Jersey. Her battery voltage was in a fairly steep decline, and we suspect she’s also one of those owls whose behavior — avoiding the sun, preening her back feathers over the solar panel — may make recharge an issue until we get longer days and a higher solar angle.

However, it’s also possible that with all the ice cover on Lower New York Bay between Staten Island and Sandy Hook (so much that some of the ferry service to Manhattan has been curtailed) she’s just moved out of cell range, even in this cell-dense region. 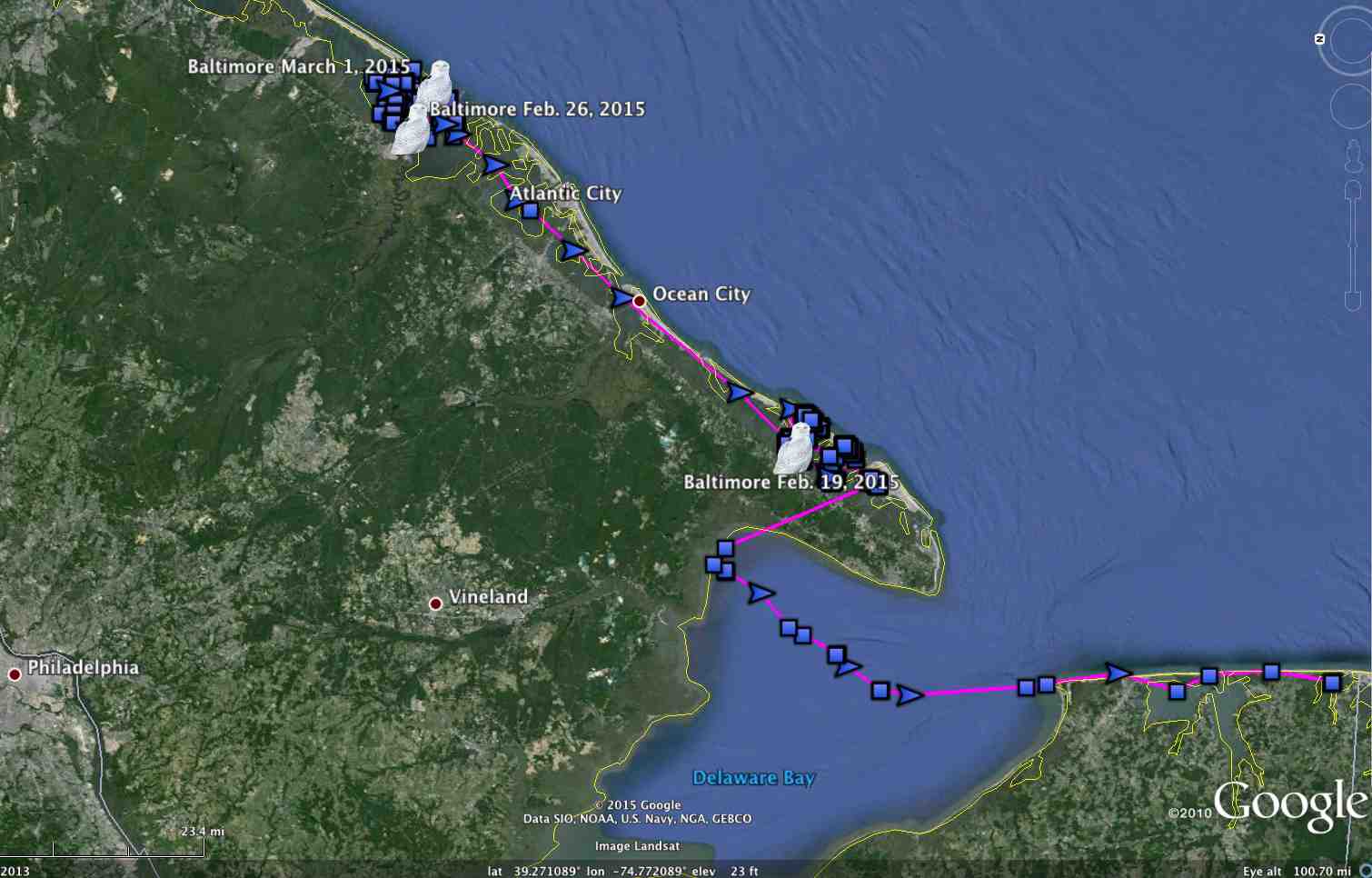 Baltimore’s flight to the north (which in this image is to the left) since mid-February, bringing him to New Jersey’s snowy owl hotspot this winter, Holgate NWR. (©Project SNOWstorm and Google Earth)

By contrast, Baltimore’s transmitter is ticking along at nearly full charge, almost as if it were still under the LED lamps we use to maintain voltage before deployment. He must be good about turning his back to the sun, something snowies don’t routinely do.

You’ll recall that this adult male was trapped at Martin State Airport in Baltimore last month, and released at Assateague Island, Maryland. By Feb. 19 he had crossed the largely frozen Delaware Bay and was hanging out in the back bay areas of southern New Jersey near Avalon and Stone Harbor.

On Feb. 25 he moved still farther north, and since then he’s been hanging out near the southern end of Long Beach Island, and the smaller bay islands between Little Egg Harbor and Great Bay.

This is a place we’ve come to know well this winter, having tried and failed on several occasions to trap the other three snowy owls that are using the southern tip of the island, which is the Holgate unit of Forsythe National Wildlife Refuge. At dusk on March 1, when he checked in, Baltimore was roosting in the dunes near an overwash area, very close to where we had tried to trap a different owl last month.

2 Comments on “Stay-at-homes and Wanderers”