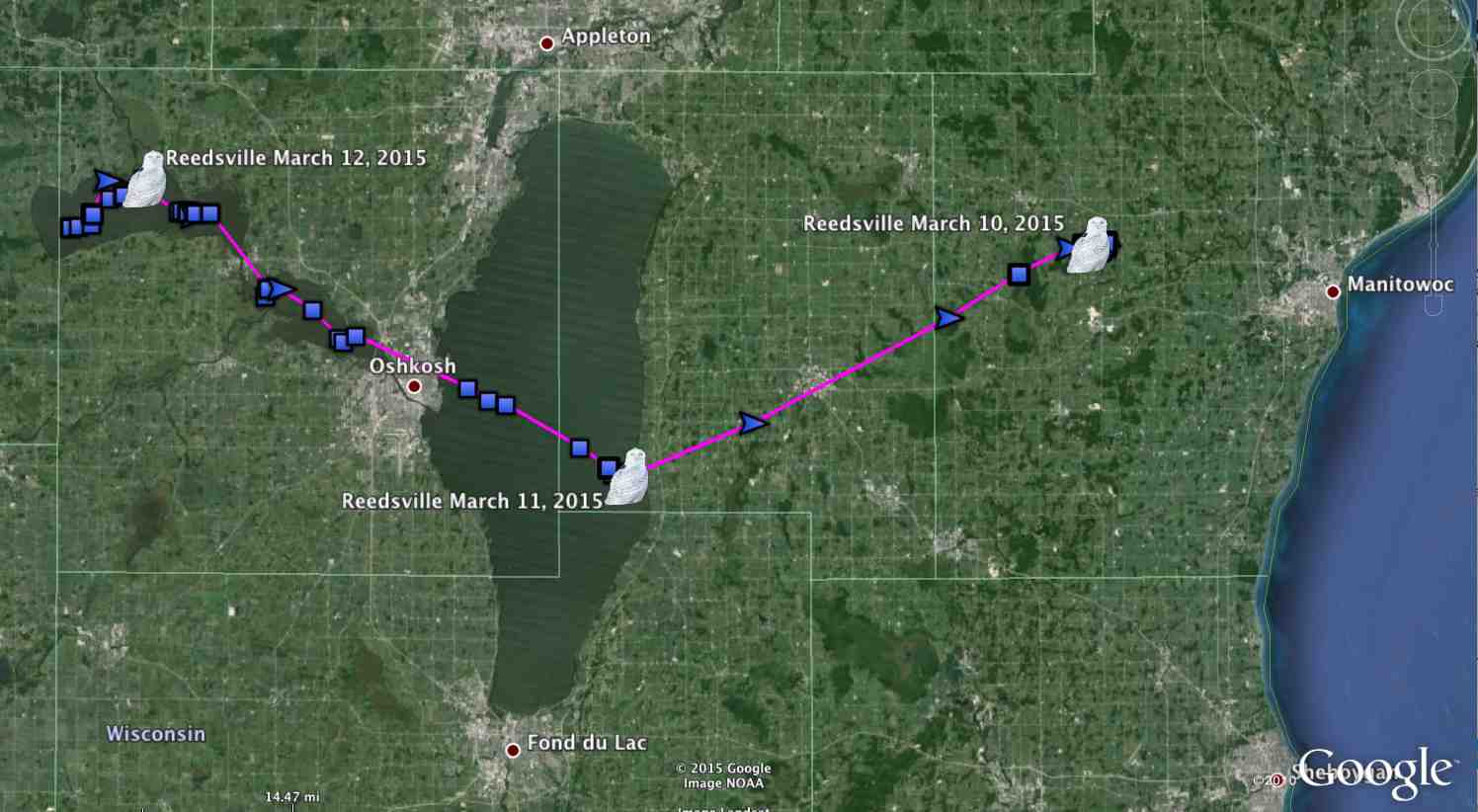 Reedsville’s on the move — is it a little winter restlessness, or a sign of spring wanderlust? (©Project SNOWstorm and Google Earth)

Thursday night was our weekly check-in. As always there were some surprises, and some owls we didn’t hear from…whether out of cell range, or suffering a temporarily low battery, we can’t say.

Here are ones that checked in. Starting from the east, Orleans remains regular as clockwork along I-81 in upstate New York, just a few miles south of the Canadian border. And just to her southwest, Chaumont checked in along his namesake river near the Thousand Islands area of New York, hard by the Ontario border.

He’s uploading backlogged data from last month, when his transmitter’s battery dipped below the minimum threshold for cellular communication, but continued to record GPS readings. Now that the sun is climbing higher and longer, the voltage is strengthening, too, and we’re getting that stored data. (This project has taught us all a lot about being patient.)

Chaumont has shown little interest in straying from a small neighborhood on the north side of the river and some adjacent farmland, but this batch of data show he made a few excursions out on the ice in Chaumont Bay in eastern Lake Ontario, which was almost completely frozen last month.

Down in Livingston County, New York, south of Rochester, Geneseo is staying within a fairly small area of about 1.6 by 3.5 miles (2.5 by 6 km) — with an intriguing exception. Twice in the past month he’s upped stakes and flown 4.5 miles (7.2 km) west to a farm with a couple of big barns — either poultry or hogs, most likely. Those locations are really clustered around the barn and its immediate surroundings — perhaps the rodent pickings are especially rich there.

Two of our 2014 owls were among those that sent data on Thursday. Millcreek continues in his same winter territory in the suburbs of Toronto, and continues to use a large area of commercial, industrial and residential zones while studiously avoiding the airport. Give that owl a mouse, folks.

Erie, our 2014 owl who had been out on Lake Huron’s ice until March 3, is up in Huron County, Michigan — the north end of the “thumb.” That’s beautiful (and, from an owl’s perspective, beautifully flat and treeless) farm country.

He may have to stay on land, at least for now. The ice is rapidly going out along the western side of Lake Huron, as the latest satellite imagery from NOAA’s CoastWatch site shows. There’s a huge swath of open water extending more than 100 miles (162 km) north to Thunder Bay, and nearly 50 miles (75 km) from the western shore. Only Saginaw Bay is still firmly frozen. 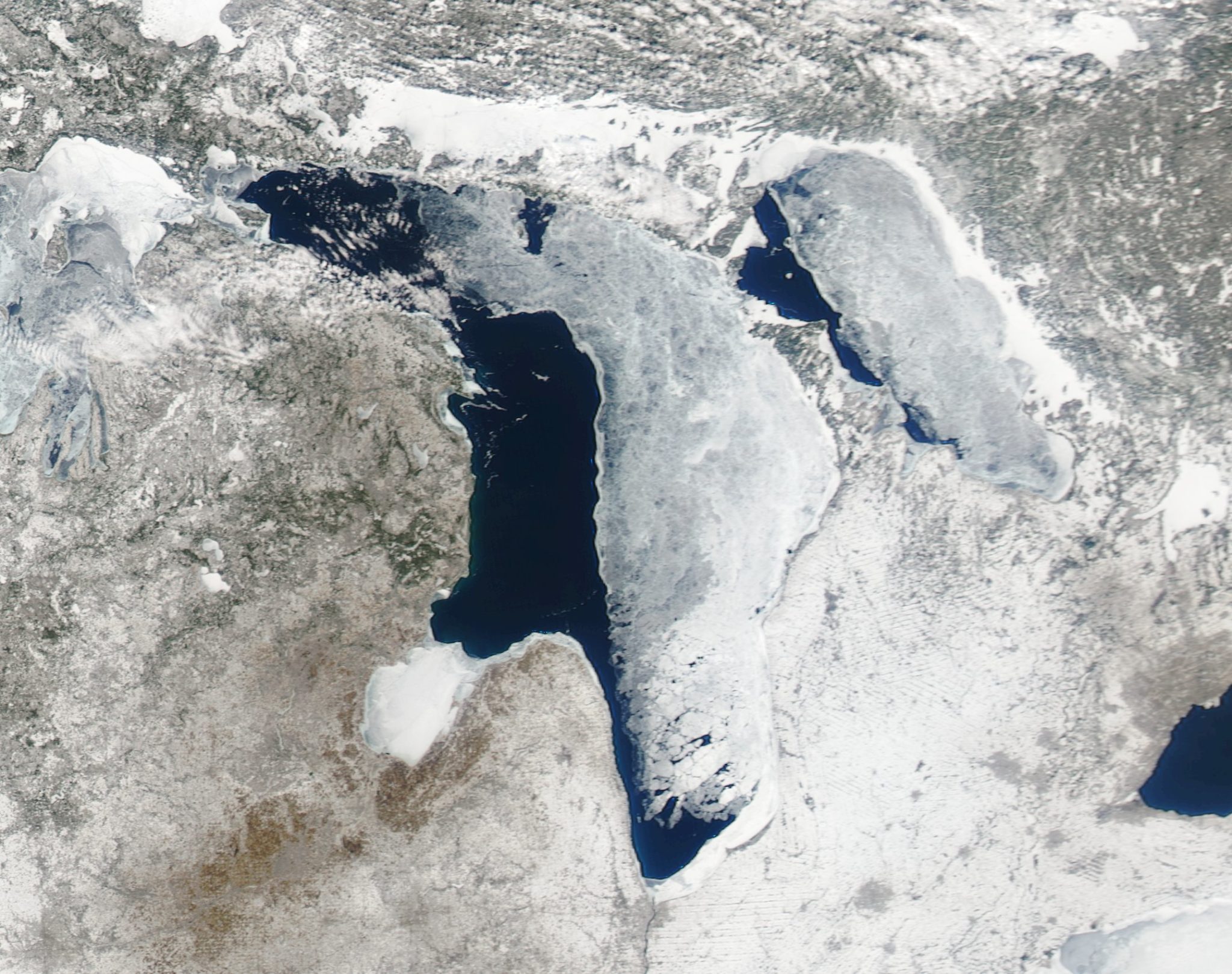 Ice cover on Lake Huron — including a lot of open water along the western shore. (NOAA CoastWatch MODIS imagery)

That’s quite a change from last year, when the lakes stayed frozen later in the spring, and Lake Huron (and Georgian Bay to the north) provided an icy highway for several northbound owls, including Erie. You can see from this comparison in ice depth, also courtesy of NOAA’s CoastWatch, how much more open water (in blue) there is this spring.

A comparison of ice conditions on March 14 this year (left) and last year on the same date shows a lot more open water (in blue) this winter. (NOAA)

Up in the Upper Peninsula, Whitefish Point kept to her side of the invisible line dividing her territory from neighboring Chippewa’s (who did not check in this week). There’s only one point, between several hundred for each owl, that showed any overlap — a single time that Chippewa sat on a house roof, a perch usually dominated by Whitefish Point.

To the south Buckeye, having traveled 31 miles (50 km) from the suburbs of Toledo, reversed course and retraced much of her route, and by March 12 was near the town of Haskins, Ohio, in Wood County. We hope she’ll continue to avoid airports, but there’s a chance she’s heading back to the Toledo Executive Airport where she spent a couple of weeks last month.

Over in Wisconsin, Goose Pond — who missed the previous week’s check — was back with a fresh report on Thursday. He’d shifted to the west near the town of Leeds (and apparently into a cellular dead zone — it happens to snowy owls just like it happens to your cell phone). Then he moved back to the University of Wisconsin’s beef grazing farmstead near Arlington, where he’s been hanging out much of the past month.

I saved perhaps the most interesting for last — Reedsville, with Whitefish Point our newest tagged owl. She’s been on the move in a big way — and to a degree we’ve not seen this winter from a snowy owl that wasn’t relocated from an airport.

Reedsville was tagged March 8 in Mantiwoc County, close to Lake Michigan. We’d assumed she was on her winter territory, but by March 11 she was moving west, first across Lake Winnebago, then up the Oshkosh River to Lake Butte des Morts and Lake Poygan, about 50 miles (80 km) from where she started. Maybe she was already cruising when Gene Jacobs intercepted her with a tag.

This reminds me a lot of the pre-migratory wandering we saw last winter from several of our owls, including Ramsey in Minnesota and Marshfield in Wisconsin. Ramsey actually made a long, swooping movement south, then west, then northwest, through southern Minnesota, the Dakotas, Manitoba and Saskatchewan before we lost him.

Is this the first hint of spring? Could be, or Reedsville could plump herself down for a long spell. But it’s also possible that some of our northern owls, like the mysteriously missing Chippewa, could already have bolted north so quickly that they got beyond the sparse cell network in southern Canada between check-ins and are already gone. A local birder who has been keeping an eye on the concentration of snowy owls near Pickford, MI, this winter — including Chippewa and Whitefish Point — found just one over the weekend.

We’ll have to see if Chippewa checks in again this week, but she could slip through the cellular net with one or two quick flights north. That happened last year to several snowies, including Century, who managed to get from southern New York to the limits of cell coverage in central Quebec without being in cell range — though we got that northbound data when she came back south this winter.

Stay tuned — the coming weeks should be among the most interesting of the winter.