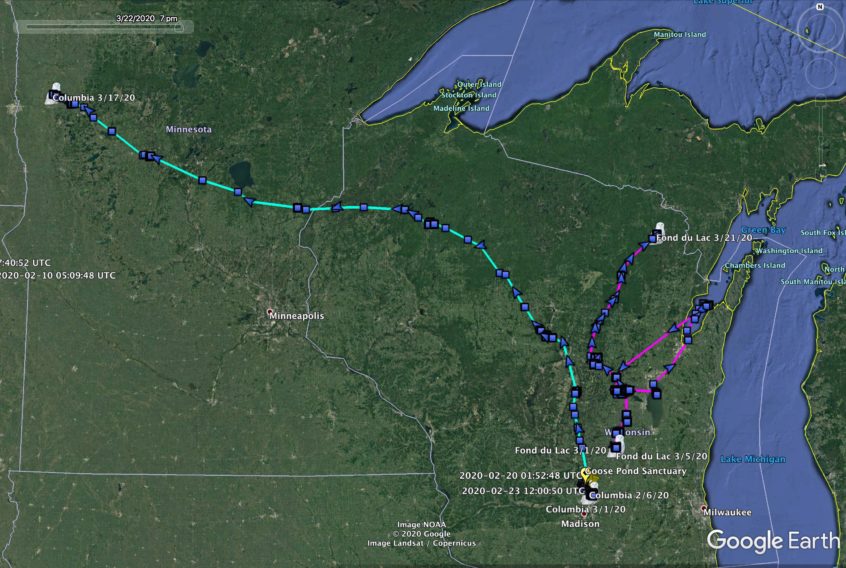 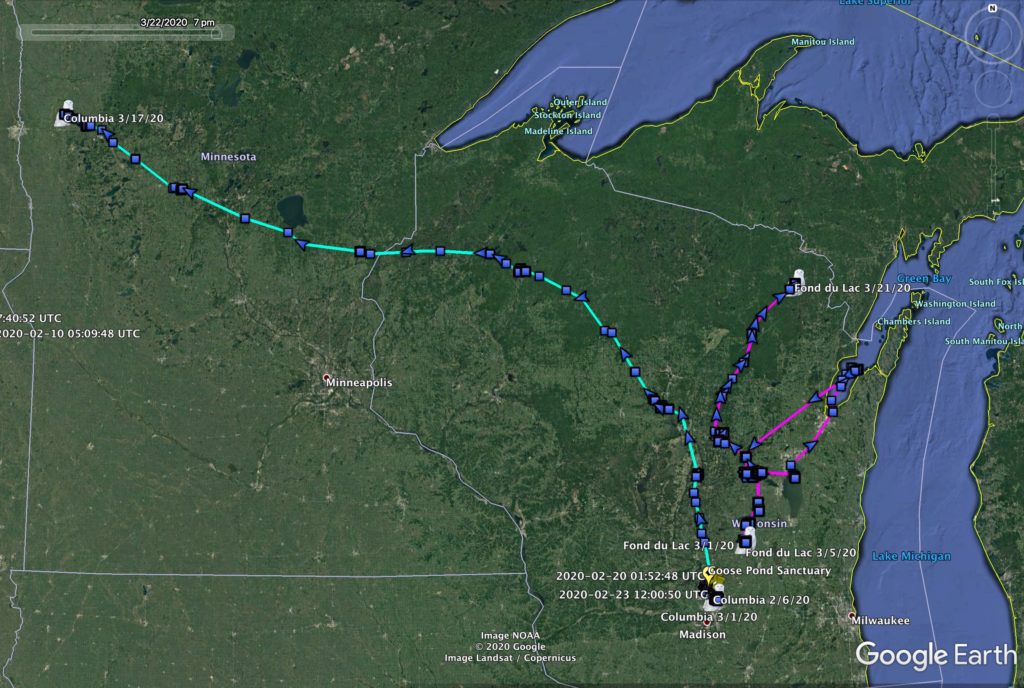 These have been strange and disquieting days for everyone, no less so for those of us with Project SNOWstorm. The global coronavirus pandemic has upended — well, pretty much everything. But even in hard times, owl research goes on.

As of now, everyone on the SNOWstorm team is healthy; most are working from home, but some have unfortunately experienced layoffs in their day jobs. Two of our members, Jean-François Therrien and Dave Brinker, had a rough time returning from an International Snowy Owl Working Group meeting in Norway a couple of weeks ago, after major travel restrictions and flight cancellations ballooned while they were in the Arctic. Both went into self-quarantine when they finally made it home. (They’ll have a full report of that very productive meeting in the near future.)

Snowy owls don’t know about coronavirus, fortunately — they only know that the days are lengthening toward spring, and the tug of the Arctic is getting stronger and stronger. Some have already started migrating back north, and may soon be out of cell range for the summer. It’s a welcome reminder that, however dark and frightening things may look to us now, there are older, deeper, richer forces at work, and from them we may take comfort and inspiration.

So, with the hope that it takes your mind off virus news for a while, here’s a wrap-up of where things stand with all 15 of owls we’ve been tracking this winter. 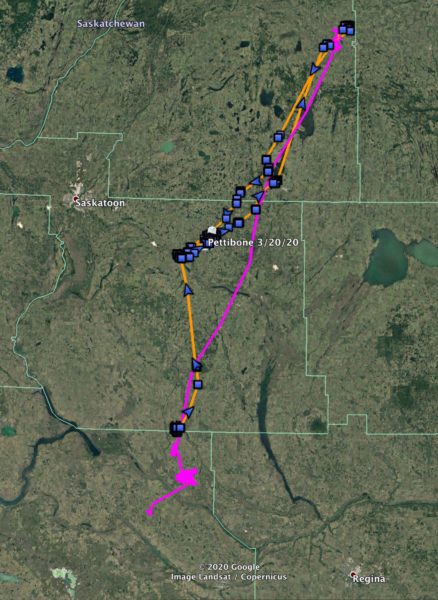 Pettibone’s most recent movements (orange) overlayed with his track from the winter of 2018-19 (purple). (©Project SNOWstorm and Google Earth)

Let’s start out West. Pettibone has bounced back and forth a couple of times this month, apparently testing the waters (so to speak) to the north. At the beginning of the month he was in near Craik, SK — a familiar spot very close to where he spent most of last winter. March 4-6 he flew more than 200 km (130 miles) north to near Melfort, SK, again near a spot he knew from last spring’s migration. But after just a day he turned around and flew much of the way back south again, and March 20 was in Div. No. 11 near Viscount, SK, about 70 km (44 miles) southeast of Saskatoon. As with some of his movements in the past, the change of direction may have had to do with deeper snow cover up toward Prince Albert, SK, compared with little or no snow farther south.

In southern Manitoba, Stella did a little exploring in at the very end of February, making an 87-km (55-mile) loop around Whitewater Lake before homing back to the areas along the south shore where she’s spent almost the whole winter. But as we’ve noted before, such exploratory flights are common at this time of the year as premigratory restlessness (itself brought on by hormonal changes triggered by the lengthening day) exerts itself.

In the Dakotas, our three tagged snowies are creating a tangle of colored tracks across the landscape. Even Medina, who has been plunked like a rock all winter near Steele, ND, made a few local flights in late February, then moved about 35 miles (56 km) to northern Kidder County. 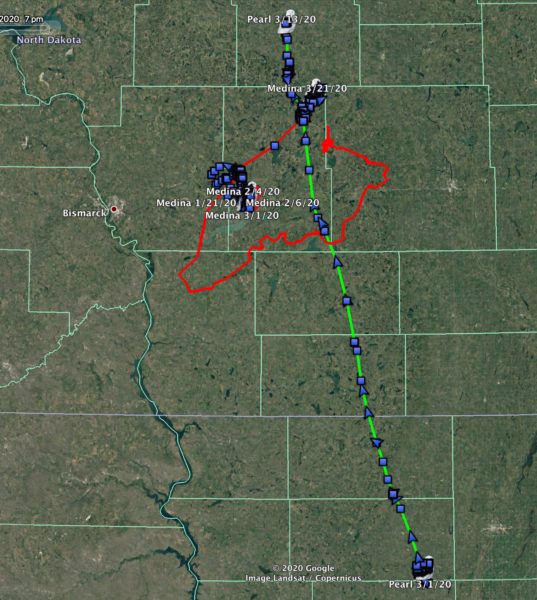 If Medina had been a day or two earlier, she would have bumped into Pearl, because they crossed paths in northwestern Kidder County. Pearl left Edmunds County, SD, on March 10 and over the next three days flew 165 miles (266 km) to the middle of Wells County, ND, where she last checked in on March 13 near the town of Fessenden.

After wandering quite a bit this winter, Coteau seemed to settle in for a bit along the Roberts/Day county line in northeastern South Dakota, just east of a complex of large lakes including Waubay, Bitter, Rush, Enemy Swim and Spring lakes. She last checked in March 12, but we know from previous experience in this area that there are patches of poor cell reception, and we expect we’ll hear from her again once she moves to a spot with better coverage.

The biggest flight of the spring so far involves one of our two Wisconsin owls, Columbia — who is no longer a Wisconsin owl. This third-year female started moving out of her territory at Goose Pond Audubon Sanctuary north of Madison on March 9, and over the next eight days moved 522 miles (840 km) northwest across Wisconsin. In heavily wooded Sawyer County she found one of the few areas of open farmland March 13-14 to rest, but then pushed on into Minnesota on March 14, crossing south of Milles Lacs Lake and past Detroit Lakes. On March 17 she was — wait for it — at Goose Prairie Wildlife Management Area in Clay County, MN, not far from Fargo, ND. From Goose Pond to Goose Prairie — this owl seems to have a waterfowl fixation.

The other Wisconsin owl, Fond du Lac, started moving March 7 and dropped off the grid for a while — she was, at we later learned, out on the ice on Lake Winnebago and Green Bay. March 19 she started moving north, and on March 21 was in Marinette County, WI, close to the Upper Peninsula — a heavily wooded, lightly inhabited region, where she was hanging out in what appears (from satellite images) to be open wetlands and bog in the middle of the forest. 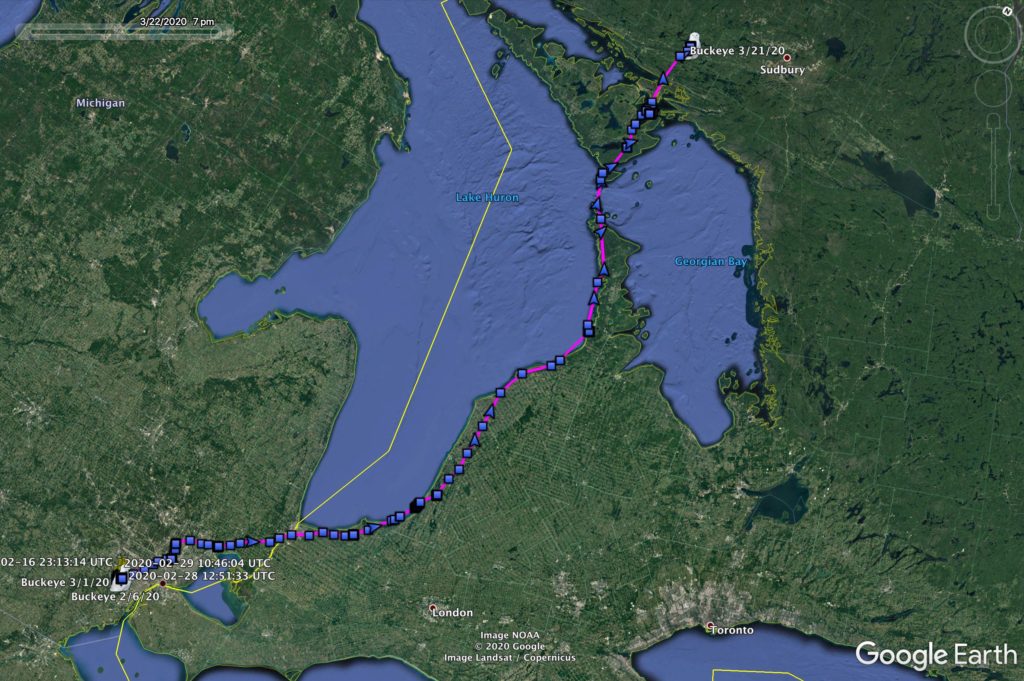 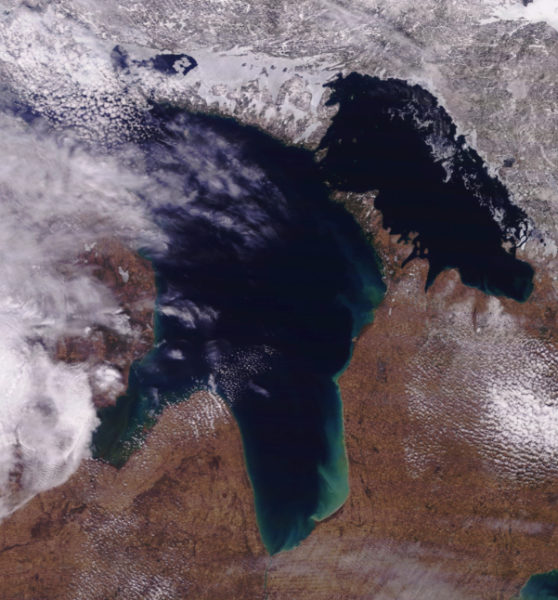 No wonder she took the lakeshore route — there is no ice on Lake Huron. (NOAA CoastWatch)

One of the owls we’ve been most concerned about all winter has been Buckeye, who despite repeated relocations kept going back to the Detroit airport. Now, spring has sprung her loose from her (ahem) terminal addiction. March 14 she started moving rapidly to the north, and she covered 361 miles (582 km) in the next four days as she crossed into southern Ontario, and edged up the east shore of Lake Huron to the Bruce Peninsula along Georgian Bay. In a normal winter, she would undoubtedly have moved up the lake offshore on ice — but as NOAA satellite images make clear, there really is no ice this winter on most of Lake Huron.

Buckeye crossed Manitoulin Island March 19, and on March 21 was just north of the improbably named town of Espanola, ON, about 60 km (35 miles) southwest of Sudbury. (Espanola was named for its location on the Spanish River — and that, according to the infallible Wikipedia, was so named because early French explorers encountered a Spanish-speaking woman, taken captive by local Ojibwe people on an expedition far to the south.)

There have been less dramatic movements in the East. On Amherst Island, both Amherst and Simcoe remain on territory, though as has been the case all along, Simcoe travels a lot more, continuing to visit Wolfe and Simcoe islands, as well as tiny Pigeon Island far offshore. Over in upstate New York’s Cape Vincent, Redwood began moving north on March 8 and flew up into southern Ontario, where he stayed a bit in Stormont, Dundas and Glengarry United Counties, and more recently in Prescott and Russell United Counties, about 40 km (25 miles) east of Ottawa. 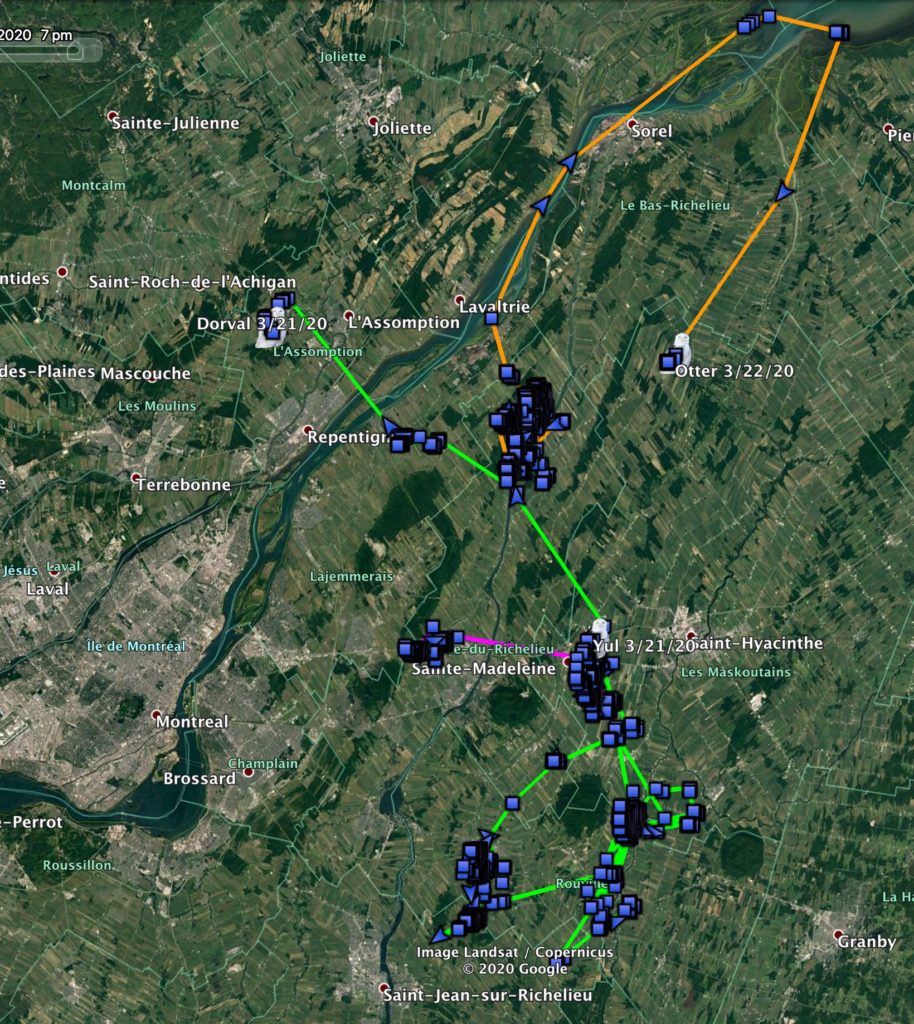 East of Montréal, Yul hasn’t moved much at all, while Dorval crossed the St. Lawrence and on March 21 was near L’Épiphanie, QC. Otter made his first significant flight in months on March 22, looping out and around Le Bas-Richelieu before turning most of the way back. Interestingly, given that he had pulled off its external antenna, the Argos satellite component of his transmitter has come back online and is sending weekly Argos transmissions. If that continues, we may again be able to track him in the Arctic even after he leaves cell range. The CTT engineers are scratching their heads over this news, but however it happened, we’re happy.

How long will Wells stay in Québec City? Most years she leaves in mid-April. (©Project SNOWstorm and Google Earth)

Lastly, Wells seems content for the moment in Québec City, though she seems to be spending more time along busy Autoroute 40, and in the past day or two she moved across the river to the south shore for the first time, then back again. In years past, she’s  normally headed north around the end of April. With this year being a significantly milder on in many parts of eastern North America, it will be interesting to see if she advances that schedule.

Whew! Quite an update — and more excitement to come, I’m sure, as more and more of the owls are pulled north. Stay tuned (and stay healthy, please).

6 Comments on “The Pull of Spring”