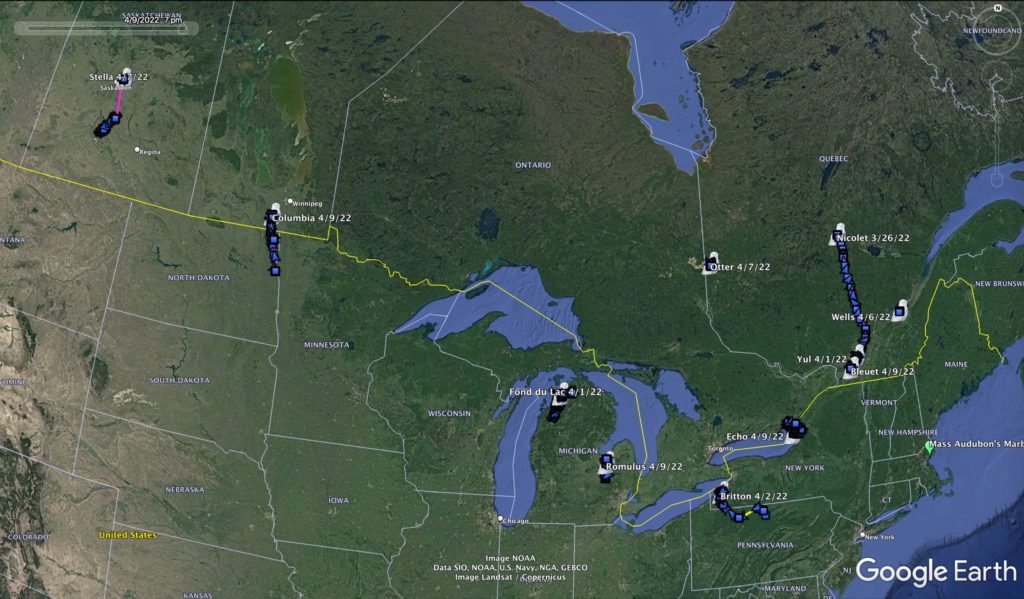 An overview of where the owls still in cell contact were in late March and early April. (©Project SNOWstorm and Google Earth)

Breaking, and very unwelcome news: As I was preparing to post this update, we learned that Roc, the adult female tagged by Tom McDonald’s team at the Douglass-Greater Rochester (NY) airport earlier this winter, was found dead along on off-ramp from I-390 close to the airport, the apparent victim of a vehicle collision. We’re grateful to the Monroe County Sheriff’s Department for assisting Tom in recovering Roc from a dangerously busy location. And we’re very sorry this beautiful old girl won’t be heading back north to the Arctic in a few weeks to nest.

Tough to lose two birds within such a short time, coming right after Amherst.

Here’s the rest of the update… 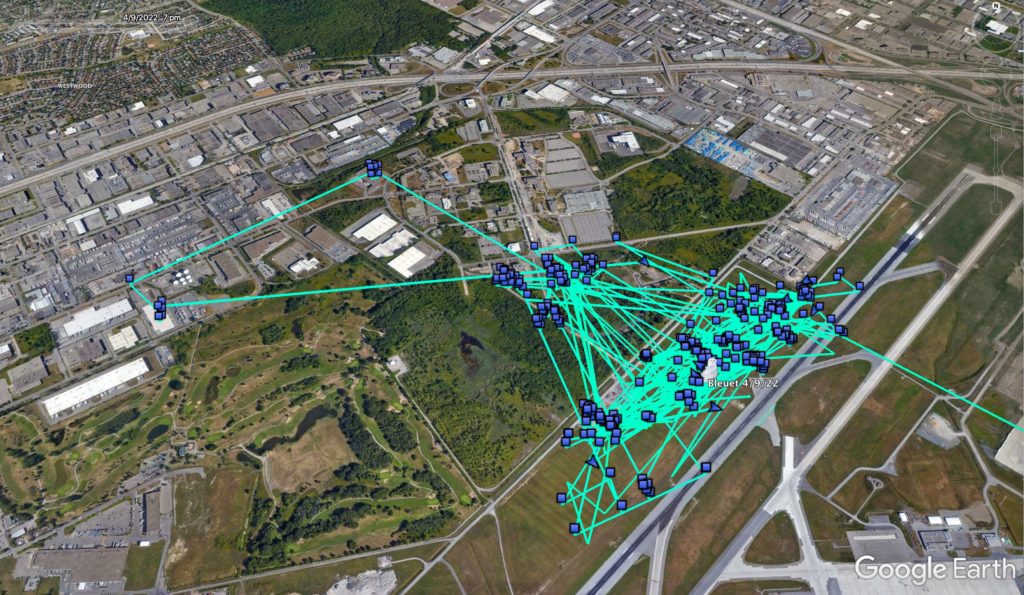 Bleuet has been hunting the edge of the Montréal airport and a neighboring “eco/clean-tech” park. (©Project SNOWstorm and Google Earth)

As promised in our past post, here’s a rundown of where our owls are (or where they last transmitted from), as spring begins to pull many of them north.

Those that remain more or less on their winter territories are now relatively few. Wells is still in Québec City, QC, and while Bleuet made a 260-km (160-mile) flight from Montréal to Québec City, and was in the same stretch of waterfront Wells uses in late March, she turned around and flew all the way back to the Trudeau-Montréal airport by March 28. Since then she’s been hunting the northern edge of the airport and the neighboring Eco Campus Hubert Reeves, a “clean tech” industrial park that incorporates large areas of wetlands. 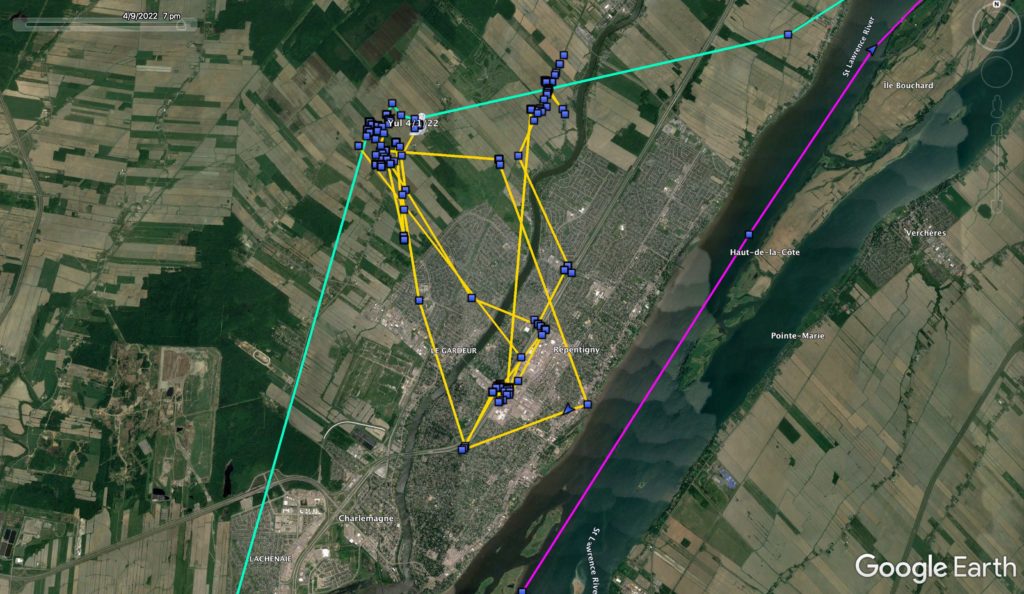 Yul moved, but not much. Having spent the winter on the south shore of the St. Lawrence, she moved March 18 to the north shore to near Repentigny, QC, where she was April 1, her last check-in. 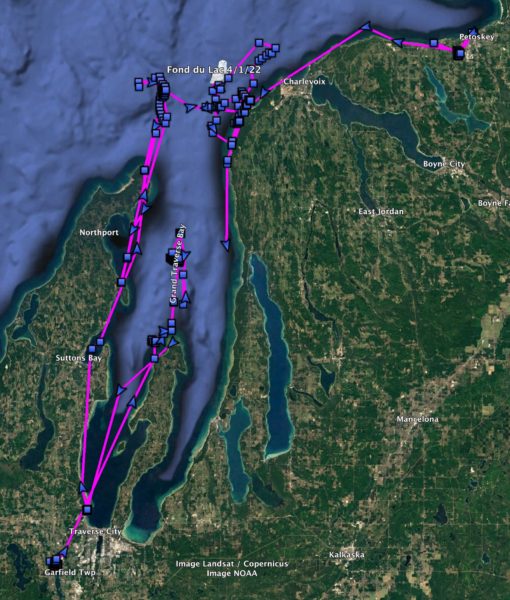 Fond du Lac has been all over and around Grand Traverse Bay in Lake Michigan. (©Project SNOWstorm and Google Earth)

To the north, Otter is still roaming around the east end (sometime on the east end) of Lake Abitibi, while in Michigan, Fond du Lac has moved north from Traverse City around and on the mouth of Grand Traverse Bay on Lake Michigan, where there’s a little floating ice. Down at the base of the “thumb” of Michigan’s mitten, Romulus made a 30-mile (50-km) flight down to Flint, then looped back again to near Reese, MI, probably a sign of growing restlessness.

Starting out west in southern Saskatchewan, Stella started north March 24 and by April 7 had flown 200 km (125 miles) north to near Aberdeen, SK, northeast of Saskatoon. Over in southern Manitoba, Columbia on April 9 was just south of tiny Sperling, MB, having migrated 167 km (104 miles) from Grand Forks, ND, beginning March 20. 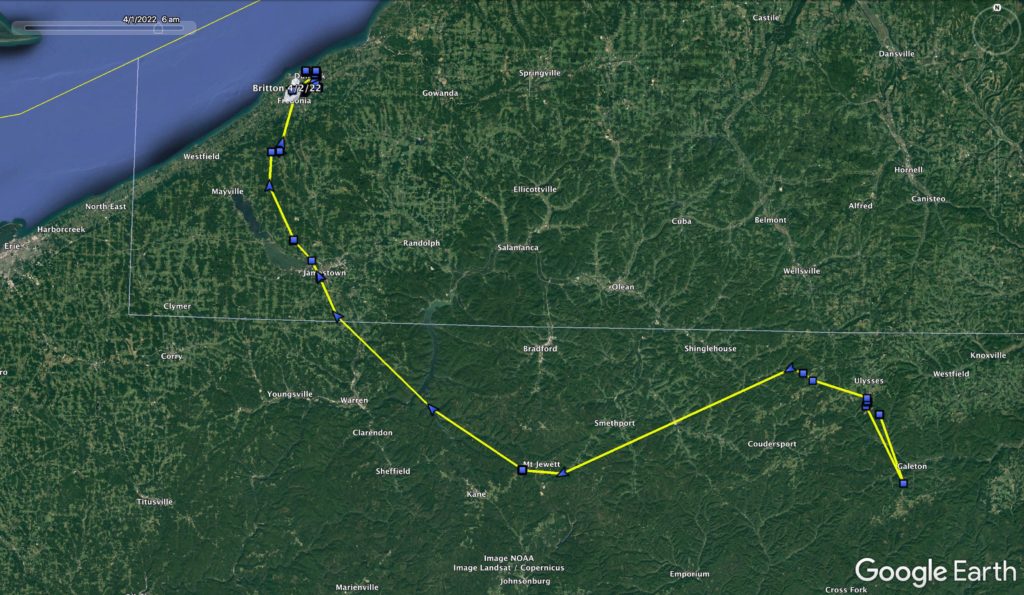 Britton is finally moving in the right direction.

Britton has been putting on the miles, and at least this time is moving in more or less the right direction, having flown from Rochester, NY, south in northern Pennsylvania in late March. March 21-23 she winged west and then north, crossing the Allegheny National Forest, passing through Jamestown, NY (birthplace of field guide great Roger Tory Peterson), and since then hanging around Dunkirk, NY, including the campus of the State University of New York – Fredonia. (Am I being stalked? I gave a talk at SUNY Fredonia last fall.) 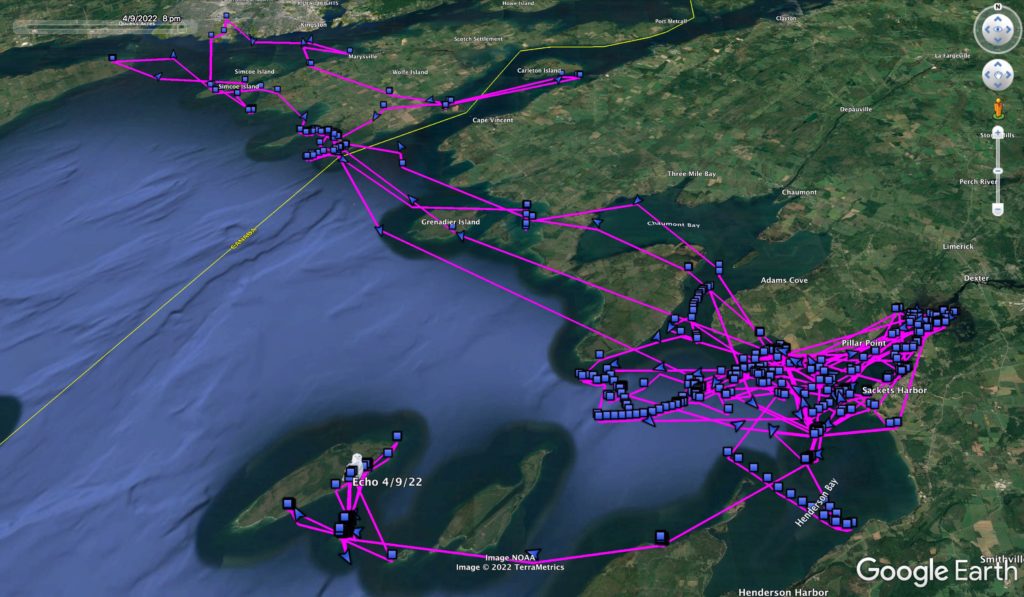 Echo has been all over the eastern end of Lake Ontario. (©Project SNOWstorm and Google Earth)

Echo has been back and forth across the U.S.-Canada border at the east end of Lake Ontario, mostly near Black River Bay and Chaumont Bay in New York, but also moving north to Wolfe, Simcoe and Amherst islands on the Ontario side. On April 9 she was on Galloo Island and (especially) Little Galloo Island off Stony Point in New York. 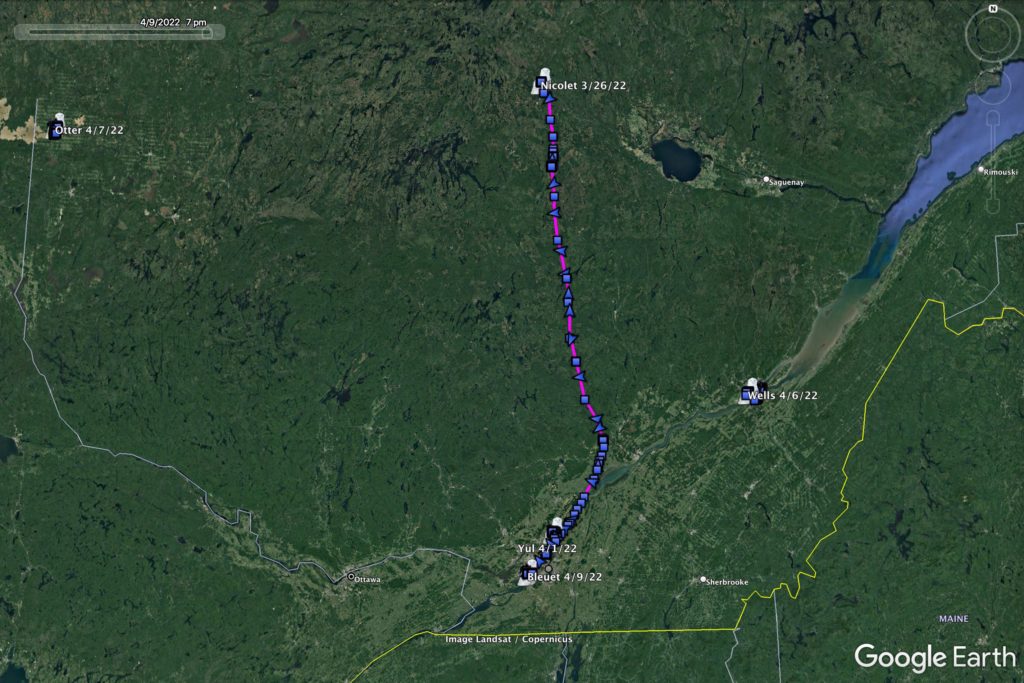 Bon voyage, Nicolet: She’s likely off the grid for the summer. (©Project SNOWstorm and Google Earth)

Of our Montréal owls, Odanak has been incommunicado since March 10 when she was moving northeast, and appears to be gone beyond the cell network for the season. Nicolet left the airport March 22, and her last transmission was four days later from the deep woods of central Québec, 400 km (250 miles) north of Montréal. Hochelaga left the airport the night of March 25-26, and his last transmission was just a short distance from the city; we’ve often seen how easily northbound owls slip through the relatively limited cell web of southern Canada.

Lastly, we have Alderbrooke, from whom we have not heard anything of substance since November, when her transmitter checked in near Lac Saint-Jean, QC. Last month we  sent a command to Alderbrooke’s transmitter, which has been connecting periodically but not sending any data; the new program would lift a protective voltage threshold designed to keep the battery from draining, in the hopes that a longer connection would allow it to send a current location. The unit took up the new command, and when it connected April 1it sent 1,092 locations…all with empty 00.000/00.000 lat/long coordinates.

We can’t tell what happened; either the unit is simply malfunctioning or, more likely, something happened to it and to Alderbrooke. Obviously, we hope the former. This is one of those mysteries we may never solve — or, as with the recovery of Badger’s worn transmitter last year along the shore of Lake Superior, years after she disappeared, maybe we’ll be surprised down the road one day with the final piece of the puzzle. You never know.

The First News From the North
Sad News

7 Comments on “The Pull of the North”