You can lead a snowy owl to perfect habitat, but you can’t make her stay: Monocacy’s march back to the city. (©Project SNOWstorm and Google Earth)

Settle in for a long read, folks — there’s lots of news this week, both on newly tagged snowies and returned birds from last year.

We have updates both old and new on Monocacy, whom you’ll recall was just retagged and released last week after being relocated from LaGuardia Airport in Queens. She was originally tagged in March 2014 in Maryland.

First, the old. The data from Monocacy’s original transmitter was, as we expected, pretty incomplete. It included a couple additional days’ worth last March in Baltimore (ranging from the Inner Harbor to Patterson Park) — but that comprised several thousand locations at 30-second intervals. It also had about three week’s worth of data from mid-June to early July, when Monocacy was in the northern Ungava Peninsula in Quebec, a bit west of where Erie and Century spent the summer.

Now for what Monocacy has been up to this past week. She was released Wednesday evening just at dusk, along the south shore of Long Island at Robert Moses State Park on Fire Island — as fine a piece of coastal snowy owl habitat as you could ask for, and a site chosen after careful consideration.

Of course, we didn’t ask her. This is the owl that spent last winter in downtown Baltimore, and much of this winter in Queens. Within an hour or two of her release, she headed north — leaving the barrier islands behind, crossing Great South Bay and its expansive tidal marshes — and flew 10 miles (16 km) to Republic Airport in East Farmingdale.

She spent two days sitting on the runway and taxiway lights and signs — exactly the kind of place where we don’t want a snowy owl. Then Friday night she flew southwest, back to the coast — crossing Middle Bay, skimming along Long Beach, stopping briefly at Floyd Bennett Field, the historic airport in Brooklyn that is now part of Gateway National Recreation Area…and which is still used as a helicopter base for the New York Police Department.

Before daybreak Saturday she was in Bayonne, NJ, sitting on rooftops in town but mostly hanging out along the Hudson River waterfront. She was only 14 miles (22 km) from her starting point at LaGuardia, but maybe she’ll find Bayonne (or marshes of the nearby Meadowlands) to her liking.

Our big worry is that she was barely 3.5 miles (6 km) from Newark International Airport, which is about the worst place she could wind up. If she does, we hope the Port Authority folks (who initially captured her at LaGuardia) will be able to retrap her…in which case we’ll be relocating her a third time.

Chippewa the day of her release, near Pickford on the UP of Michigan. (©Nova Mackentley)

Chippewa, up on the Upper Peninsula of Michigan, is the opposite of Monocacy and her urbanized, wandering wings — as Dave Brinker puts it, this adult female is “burning a hole in the map.”

Chippewa was trapped in the eastern UP on Feb. 8 by Nova Mackentley and Chris Neri from Whitefish Point Bird Observatory, and released at her capture site. Since then, Chippewa has logged about the smallest activity area of any of the nearly 30 snowy owls we’ve tagged the past two winters — less than half a mile by half a mile (.72 km by .72 km), centered on two neighboring farms, one of whose barns is her favorite perch. The rodent hunting must be awfully good there, because she doesn’t have to roam.

Our other two Michigan owls are moving a bit more than Chippewa. Alma, an airport owl relocated from Grand Rapids to southeastern Michigan in late January, has looped around the town of Chelsea over the past couple of weeks, moving south into ever-more-open farmland. Still, he’s within 5.5 miles (8.9 km) of his release site.

Prairie Ronde, another adult female, was relocated from the airport at Saginaw, Michigan, and released Feb. 11 south of Kalamazoo in the Prairie Ronde area, where remnants of the old prairie and savannah ecosystem remain among agricultural fields. In her first three days, she was staying within a couple miles of her release site, and not showing any immediate inclination to move back north toward Saginaw.

Project SNOWstorm has had strong cooperation in Michigan this winter. Besides banders like Nova, Chris and Rich and Brenda Keith, we’ve had underwriting support from Alma College, which sponsored Alma’s transmitter. Michigan Bird Conservation — a collaboration of the Audubon Society of Kalamazoo, the Kalamazoo Valley Bird Observatory/Kalamazoo Nature Center, Laughing Whitefish Audubon Society and Michigan Audubon Society — has underwritten the costs of Chippewa’s transmitter, as well as another one that we hope to deploy in the UP shortly.

(Prairie Ronde’s unit was paid for by the kind folks who donate to Project SNOWstorm through our Indiegogo campaign — for which we are continually grateful.)

Finally, both Alma and Prairie Ronde were trapped by the USDA’s Wildlife Services office in Michigan as part of their routine airport safety operations. Wildlife Services has been cooperating with our tagging efforts in a number of states as well this winter, in order to learn more about how relocated owls behave. 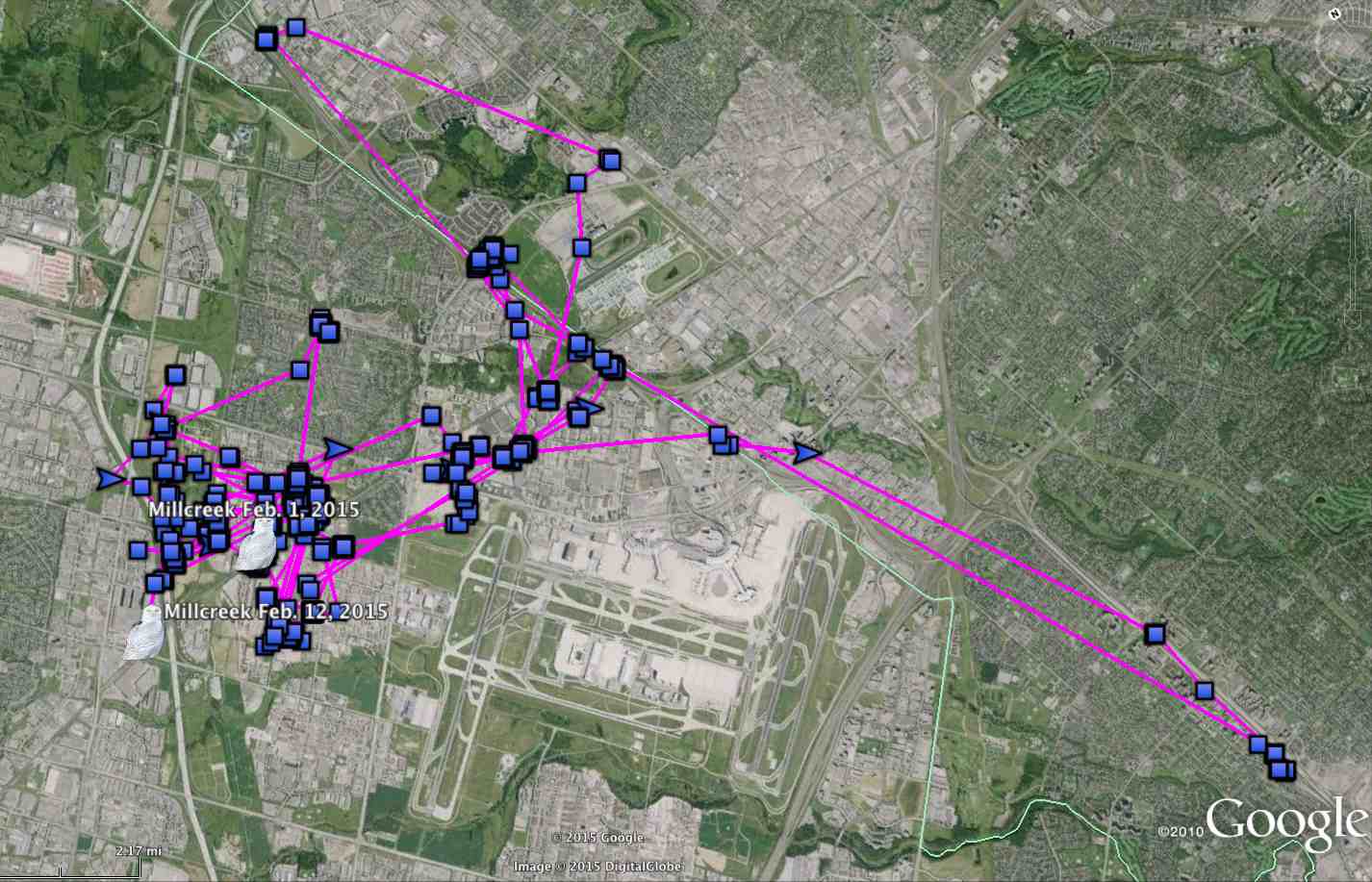 The kind of owl-airport interaction we like to see — Millcreek continues to completely avoid Toronto Pearson International Airport. (©Project SNOWstorm and Google Earth)

Millcreek checked in Feb. 12 after a period of silence — the persistently cloudy weather in the Great Lakes region as a whole has been a challenge, reducing solar battery recharge rates (and is probably why we haven’t heard from several other 2014 owls lately, including Century, Braddock and Erie).

But Millcreek remains in the same general area of Toronto, just north of the Toronto Pearson International Airport, thankfully staying completely away from the airport itself. Given the tendency of snowies to be drawn to airports like iron filings to a magnet, this is welcome news.

Millcreek also appears to have stopped hunting the median strips of major freeways; for the past couple of weeks he’s been roosting on huge office buildings, distribution centers and other commercial structures, and hunting in what open habitat remains in this intensely developed area.

One new favorite spot is an immense right-of-way corridor for high-tension electrical lines along Highway 407 (where he does, occasionally, still perch on the highway signs). This is a little worrisome, since electrocution is a risk for any large raptor, although that may actually be a greater hazard on smaller utility lines where the wires are closer together. 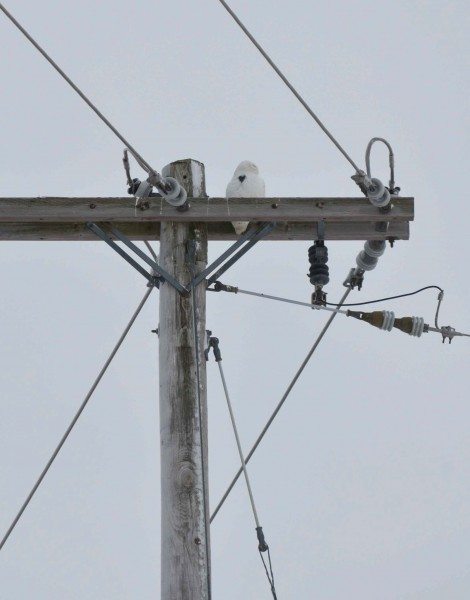 Chaumont, chilling by Lake Ontario on Valentine’s Day, with his back feathers creating a heart shape on his solar panel. Coincidence? We think not. (©Tom McDonald)

Chaumont didn’t check in this week — the weather’s been cloudy and we suspect his battery is below the threshold for cell transmissions, though not GPS locations. But Tom McDonald, who trapped and tagged Chaumont, was back up in that area of upstate New York near the Thousand Islands this weekend, and got some photos of the owl, which is using the same small area just north of the Chaumont River where he was trapped.

One of our newest owls, Goose Pond in Wisconsin, checked in with very limited data, since the owl had just been released. An adult male, Goose Pond, was relocated by SNOWstorm collaborator Gene Jacobs from Central Wisconsin Airport in Mosinee to the Goose Pond Sanctuary near Arlington, WI. As with many of the owls this winter, we’re hoping to learn more about how relocation distance, direction and habitat impact the likelihood of snowy owls returning to airports.

On his second evening at Goose Pond, he had moved just south of the sanctuary on surrounding farm fields — an area that a number of other snowy owls have been using this winter.

That’s it for now. If you’re not already, please subscribe to our updates so you don’t miss any breaking news.

And please support Project SNOWstorm however you can. Your contributions (either through our Indiegogo campaign or directly through the Ned Smith Center for Nature and Art), are tax-deductible, and they are our only means of funding the transmitters, lab work, necropsies and other research our team of volunteer scientists, banders and veterinarians conduct. But just as important is your enthusiasm, your comments and your willingness to spread the word. Thanks.