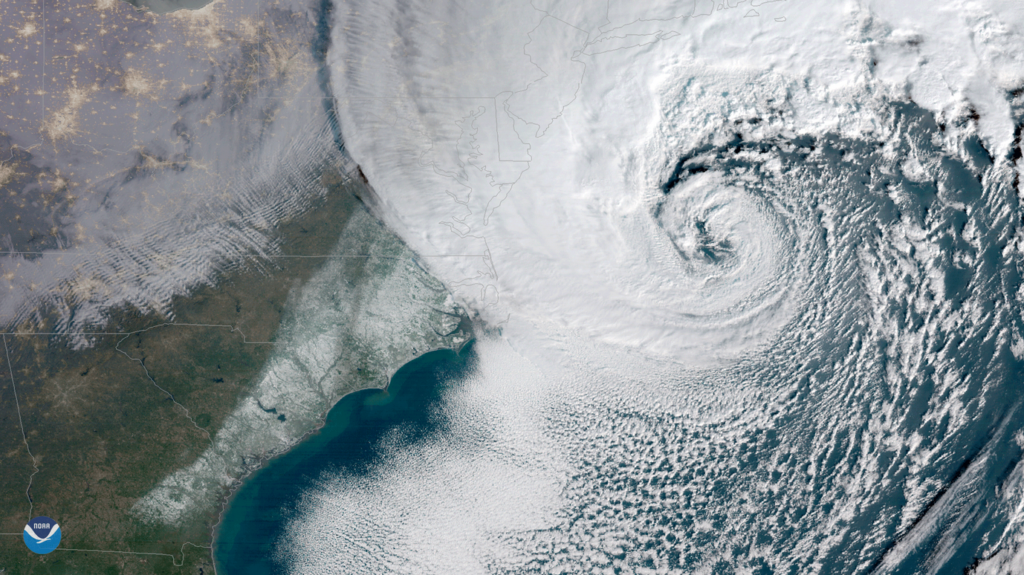 This stunning image from NOAA’s GOES East satellite shows the “bomb cyclone” spinning up off the mid-Atlantic coast, before it really intensified. (NOAA)

If you live anywhere along the Eastern seaboard, you don’t need me to tell you that one of the largest winter storms in living memory — arguably the largest such storm ever recorded — has been pounding the East Coast for the past two days.

This “bomb cyclone,” as such powerful, rapidly intensifying storms are known, has broken all manner of records and created all sorts of misery, from half a foot of snow in part of Florida to blizzard conditions, hurricane-force winds and ice-choked, flooding high tides in Massachusetts and Maine.

What effect will the storm have on snowy owls, many of which (including three of our tagged birds) are along the coast in the nor’easter’s path? We’ll have to wait and see, but we know from experience that such monster storms can pose a real hazard to the owls, especially young birds who may not always make the smartest decisions.

In March 2014, a very similar storm exploded along the Northeast coast, whipping New England with hurricane-force winds. The day after the gales passed, a beachwalker on Martha’s Vineyard found the sodden remains of Sandy Neck, a juvenile female that Norman Smith had trapped at Logan Airport, tagged and released on Cape Cod. Her transmitter showed that she was either caught by one of the 20-plus-foot waves pummeling the island, or was hit by a gust of wind. Either way, she wound up in the water where she drowned. 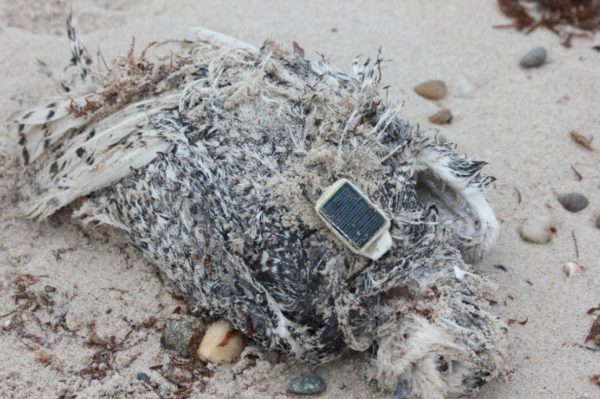 Sandy Neck, washed up on the Martha’s Vineyard beach following a monstrous nor’easter in 2014. Big storms can be dangerous for snowy owls, especially inexperienced juveniles.

At the same time, a similar scenario was playing out a bit to the north, at Gloucester Harbor in northern Massachusetts. Plum, another relocated Logan Airport bird, drowned while crossing the open water before daybreak. It took Norman several days before he found her remains, completely wrapped up in eelgrass at the high-tide mark, but fortunately with her transmitter’s solar panel exposed and still charging.

Nor were they the only fatalities. Norman heard of at least four other snowies that were found washed up on beaches in the wake of the 2014 storm.

All of those dead owls were juvenile birds. While such wild weather is a hazard to any creature in its path, I suspect an older, more experienced owl would have moved to shelter, and certainly wouldn’t have attempted open-water crossings under such conditions.

So we’ll be keeping our fingers crossed that Island Beach, Lenape and Higbee come through OK along the New Jersey coast, where the storm effects were less severe than in New England. Wednesday evening Lenape was in the back bay islands off the southern tip of Long Beach Island, while Higbee was in his usual haunts on the tidal marshes inland of the Stone Harbor barrier island. Island Beach didn’t check in, perhaps because his battery is a bit low, but five days earlier he was near Brigantine Island, just a bit south of Lenape’s position. Let’s hope they all made wise decisions.