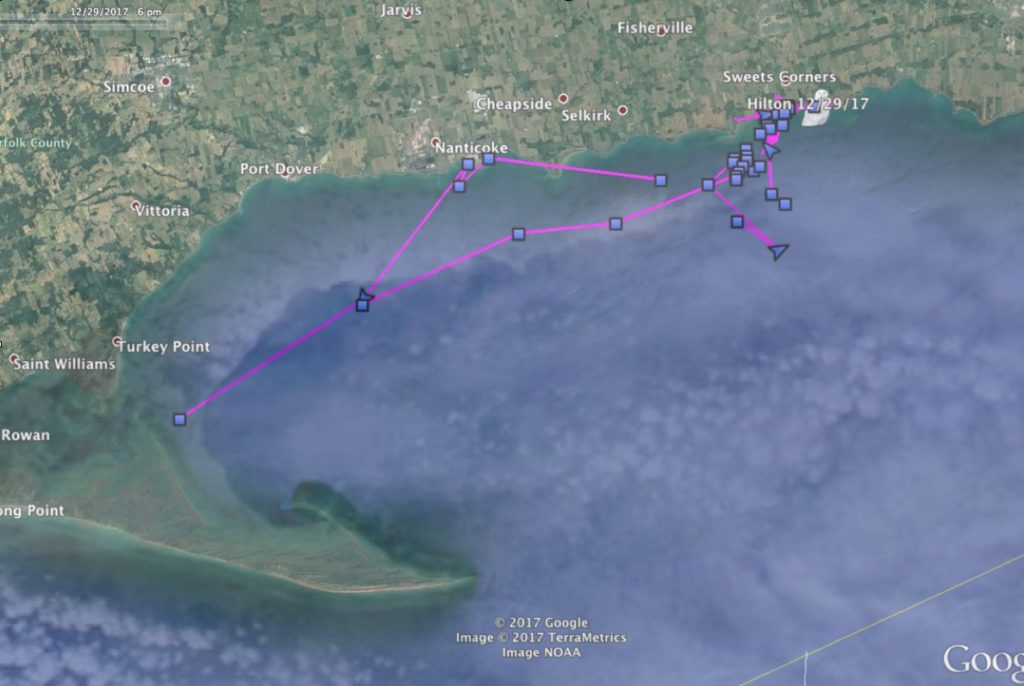 No sooner has the north shore of Lake Erie started to freeze, than Hilton headed for the ice. (©Project SNOWstorm and Google Earth, with NOAA CoastWatch MODIS imagery)

Happy New Year! This marks Project SNOWstorm’s fourth anniversary — we launched our webpage, tracking our first owl Assateague, over the New Year’s holiday of 2013-14. We’ve come a long way since then, and it’s been great to have you all along for the ride.

Thanks so much to everyone who has donated to our current funding campaign in the waning hours of the old year — as always, your support makes our work possible.

And speaking of that work — I’ve said for a long time that if I were naming the species today, I’d call them “ice owls,” not “snowy owls.” Give one of these birds a choice, and more often than not they’ll gravitate to frozen surfaces. We’ve tracked them riding on icebergs in Hudson Bay, on floes riding down the St. Lawrence River, and especially on the icy expanses of the Great Lakes in cold winters.

This is shaping up to be a dandy of a winter in the Northeast and Midwest, with record-cold temperatures — and right on cue, we have our first bird heading for the ice. Up on the north shore of Lake Erie (the shallowest of the Great Lakes, and usually the first to freeze), Hilton made her first venture offshore last week. The night of Dec. 27 she left her shoreline territory near Sweet Corners, Ontario, flying along the coast to Hickory Shores, and then out onto the ice almost to Long Point, a trip of more than 45 km (28 miles), before turning around heading all the way back again.

Overlaying her track with the latest NOAA CoastWatch satellite imagery, Hilton was exploring the outer edge of the ice sheet — a great place from which to snag an unwary duck or gull. As the lakes freeze up (along with the back bays along the Atlantic coast) we can expect to see more owls moving out onto the ice, likely for weeks at a time.

This association with ice isn’t just a Lower 48/southern Canada phenomenon, either. SNOWstorm team member Jean-François Therrien at Hawk Mountain Sanctuary, with his colleagues at Laval University in Quebec, have documented the way that some adult snowies head north in winter, onto the Arctic sea ice, where they hunt sea-ducks and alcids in permanent openings in the ice called polynyas. In a sense, the mostly younger birds  in the Great Lakes this winter will be practicing a lifestyle they may follow — in a far more challenging environment — later in life.

We also got some great news this weekend from our dedicated friends Daniel and Patricia LaFortune in Ontario, who spent last winter keeping a close eye on Hardscrabble and Baltimore in the Ottawa River valley. After several days of looking (and scoping many other, untagged snowies) they spotted an owl perched on a silo Saturday evening. “We stopped and briefly looked with binocs, but the snowy flew away across the road and we lost him behind some trees,” Patricia said. “We kept going slowly and across he flies again, close to us — it was Hardscrabble, we could see the transmitter clearly on his back!” Seconds later, she said, a second snowy flew after him, and the two owls faced off in a tussle before they were lost in the gathering darkness. Dan and Patricia will be back, checking that area again.

Not a lot to report on the other owls. On the coast of New Jersey, Higbee continues to work the Cape May WMA marshes near Stone Harbor, while Island Beach is using the North Brigantine State Natural Area, just north of Atlantic City. Lenape hasn’t checked in for more than a week, but this is a tough time of year for the transmitters’ solar recharge, and several of the birds, including Lenape and Sterling, had units that were getting low on power — a prolonged stretch of sunny weather would be helpful, but we always struggle in the weeks after the solstice.

However you celebrate, have a wonderful New Year from all of us at Project SNOWstorm. Here’s to lots more exciting owl news in 2018.