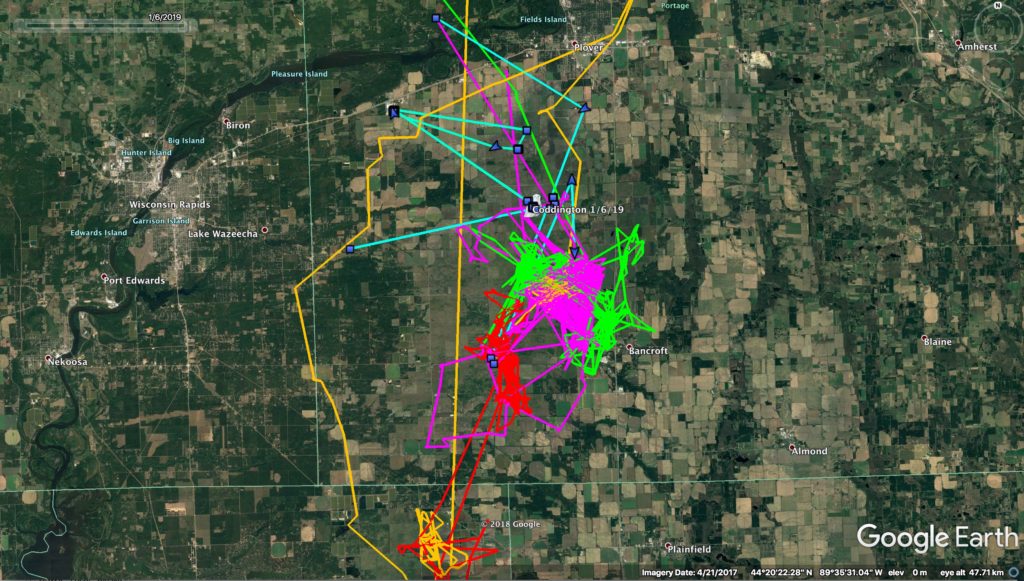 We’re pleased to introduce our newest owl — “Coddington,” an adult male tagged Jan. 3, 2019, on the Buena Vista grasslands in central Wisconsin by Gene Jacobs, and named for a nearby town. 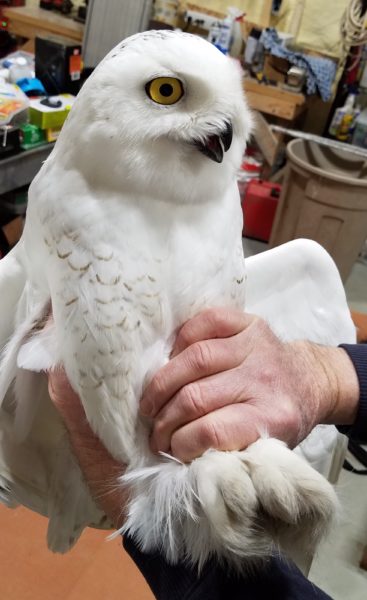 Coddington, an adult male, is the fifth owl we’ve tracked in the Buena Vista grasslands of central Wisconsin. (©Brad Zinda)

average female snowy. Gene did the fiddly work of getting Coddington fitted with a transmitter and harness indoors (easier than trying to work with bare fingers outdoors when temps are far below freezing), then released him back at his capture location.

Coddington is the fifth owl we’ve tracked at Buena Vista, a legendary tract of native prairie, agricultural fields and commercial cranberry bogs in Portage County. Much of it is included in a 12,700-acre (5,140 hectare) state wildlife area famous for its greater prairie-chicken population, and that’s where Coddington has been spending much of his time since his release. He’s wandered a bit, though, flying six or seven miles (9-12 km) west to the edge of the town of Kellner, or north to a potato processing plant along Rt. 54.

Last winter, you may recall, we tracked the interactions in Buena Vista of two male owls, Bancroft and Austin, and one female snowy, Straubel, which gave us fascinating insights into the social interactions of three juvenile owls using the same area. And in 2013-14 we tracked a juvenile male named Buena Vista, the second owl we’d ever tagged. Assuming he stays put for the winter, Coddington’s data will add to our ever-growing understanding of how different individuals of different ages and sexes use the same terrain season after season, as you can see from the layered movement map above.

We’re also really pleased that Coddington is wearing the transmitter we first deployed last winter on Arlington, tagged in January 2018 near the southern Wisconsin town of the same name, and the cost of which was underwritten by the Madison Audubon Society. Arlington was killed in late April by a vehicle collision in Minnesota on his migration north, but his transmitter was recovered and refurbished. With Coddington, Madison Audubon’s generous investment continues to pay important research dividends.

We’ll have an interactive map for Coddington posted soon — keep an eye out for it. 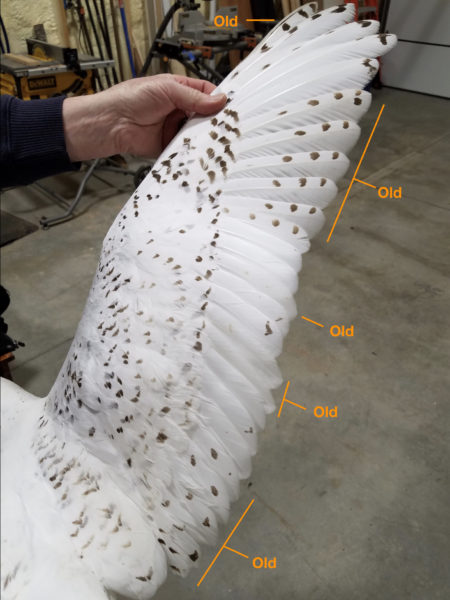 How do we know how old Coddington is? The answer lies in his flight feathers. (©Brad Zinda)

So when we say that Coddington is an adult, how do we know? After all, you can’t ask an owl for his driver’s license or birth certificate.

Banders rely on the fact that birds replace, or molt, their feathers on a predictable schedule, which varies by group or species. Most birds replace their body plumage annually (sometimes twice a year), while many owls take up to four or five years to replace all their flight feathers — not only large species like snowy and great horned owls, but some of the smallest, like northern saw-whet owls.

The only time a bird grows all of its feathers at once is as a chick in the nest; after that, molt takes place as a sequence of feather loss and replacement. As the feather ages, it fades and becomes increasingly tattered. This feather wear, and contrast between old worn feathers and glossy, newly molted ones, are critical to reading the molt pattern on an owl and assessing its age.

Look at this photo of Coddington’s right wing. You’ll notice that some of the feathers are clean and bright white, with crisp, very black markings, while others are dingier, with faded, browner bars and spots, and more ragged edges. Those dingy, worn feathers are clearly older, so we know Coddington isn’t a juvenile bird that was born last summer — if so, all of his flight feathers would look the same, with no contrasts. Note as well that the older feathers are longer and pointier than the newer ones — this is typical of many owls, where juvenile feathers have a narrowed, pointier tip. So we know that he still has many of his original flight feathers, so he’s an adult, but not a very old one.

The molt pattern that Coddington shows on both wings is typical of a snowy owl in its second winter, with a block of old primary feathers (the “hand” part of the wing) as well as several smaller blocks of old feathers in the secondaries (the “arm” part), contrasting with a number of brighter, newer feathers grown in the past year. Confusingly, bird ages are tabulated on a calendar-year basis — because there’s no way to know on what month and day a bird was actually born, all banded wild birds are considered to have a “birthday” on Jan. 1 each year. That means that Coddington, born in the summer of 2017, technically became a second-year owl, or SY, on Jan. 1, 2018, and a third-year or TY owl on Jan. 1 this year — even though his actual birthday isn’t until sometime in, say, June. We can only hope someone wishes him a happy birthday next summer in the Arctic.