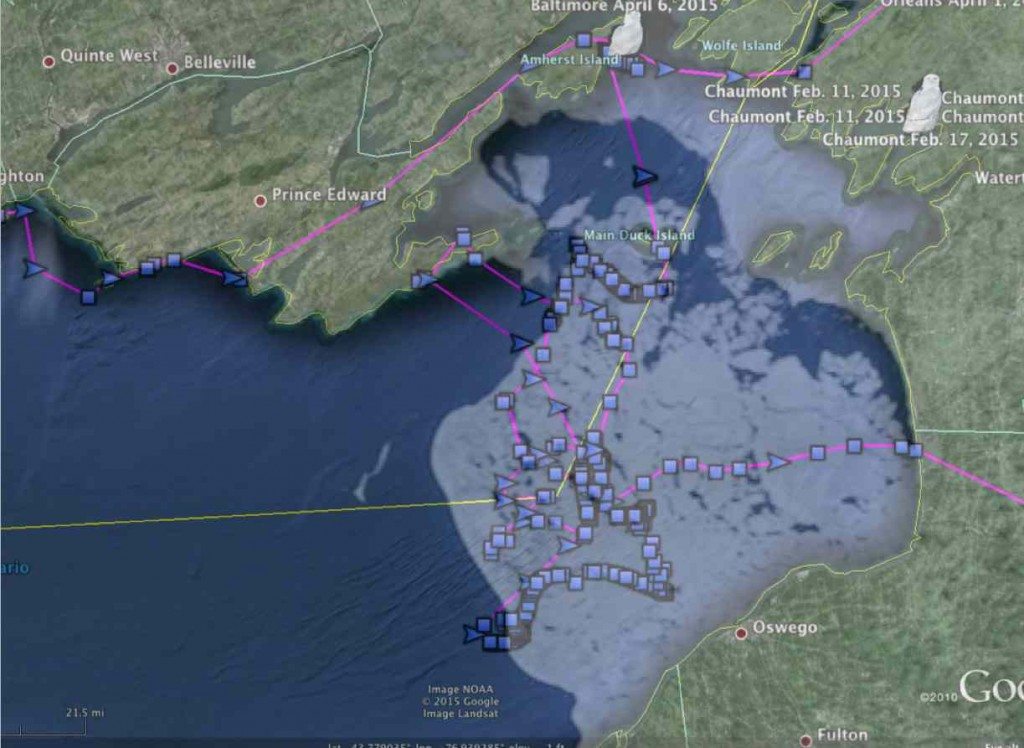 Spring is really working on our tagged owls — even if 35 square miles of ice, up to eight feet thick, doesn’t sound much like spring to you.

Up in the Upper Peninsula of Michigan, where the snow is still waist-deep in places, Chippewa has finally budged from her winter-long home territory, where she’s been burning a hole in the map since we tagged her in January. On April 6, she’d moved about 12 miles (19 km) to the west, near the town of Rudyard — not a long flight, compared to some we’ve seen recently, but a big move for this highly localized bird.

There was no report from her former neighbor, Whitefish Point, who had been on and off Lake Michigan in the days leading up to her last report on March 31. There’s a lot of ice out there for her to roost on — maybe you caught the NPR report this week about the ice jam in eastern Lake Superior, with 35 square miles of ice near Whitefish Point (the place, not the owl). Some of it has been piled up by prevailing winds eight feet thick, forcing the Coast Guard to bring in heavy Canadian ice-breakers to open a channel for ore freighters that are idle and waiting to get through at Sault Ste. Marie.

There’s been a traffic jam of a different sort on the UP — one of snowy owls. Chris Neri, who with Nova Mackentley tagged both Chippewa and Whitefish, reported that up to 61 snowy owls were being seen near the hamlet of Pickford, close to where both owls had spent the winter. The eastern UP was a staging ground when the owls were coming south in December, and it appears to be one again now that they’re heading north.

Elsewhere in the Midwest, Goose Pond transmitted some backlogged data from the end of March, still just shy of the Iowa border, across the Mississippi from Dubuque. And Buckeye, who had been on the ice at the southern tip of Lake Huron, had moved onto land in Tuscola County, Michigan, by the first days of April.

Off to the east, Chaumont is still uploading backlogged data from the dark, short days of February, when his transmitter had enough solar charge to record GPS locations but not to transmit it.

But Orleans, after a month of rarely flying more than a mile from her banding location in upstate New York, took off the night of April 1-2 and headed down the St. Lawrence River.

She went past Ogdenburg, where Oswegatchie spent last winter, flying right down the middle of the river through the night until stopping near Morrisburg, Ontario, for the day. With darkness April 2, Orleans took off again, still moving northeast downriver, fetching up in the Long Sault Islands and shoreline just outside Massena, NY.

And finally, we have Baltimore, whose movements this season have been dramatic — and so they continue.

The last update left Baltimore at the southern edge of the Adirondacks in upstate New York on March 26. After skirting the southwestern edge of the mountains — densely forested, and hardly good habitat for a snowy owl — he turned west, flying along the southern margin of the Tug Hill Plateau, mostly 300-500 feet (91-152 m) above the ground, and stopping briefly on the Salmon River Reservoir.

From there he headed out onto the eastern third of Lake Ontario, which still had a lot of ice — and no cell reception, which is why he failed to check in a couple of times. But on April 6 he phoned home, and his data showed Baltimore had been all over the map, ice-riding as the decaying ice sheet was pushed around by the prevailing winds, coming to land occasionally on Prince Edward Point and Main Duck Island on the Ontario side of the border.

When he transmitted on the 6th, Baltimore was on Amherst Island, a place long famous among birders for northern owls. And no less so this winter. That same day, 44 snowy owls were counted on and around Amherst (one of them likely Baltimore).

“The majority of the birds are on the ice off the south shore where there are good numbers of ducks (esp. Long-tailed Duck). Also good was the centre of the island and Amherst Bay, where 13 birds were visible on the ice from one spot,” Dr. Paul Martin from Queens University reported on the Ontario birding listserve.

Go North, Young Owl (and the Old Ones, Too)
From Great Lake to Great Lake