Wells has moved from the quiet farmland of southern Quebec to the edge of town, next to a conference center and a sandwich chain. (©Project SNOWstorm and Google Earth)

A fairly quiet report this week, although several of our birds continue to show signs of seasonal wanderlust, with several of them making looping rambles that wound up where they started.

Running down the roster from east to west, Wells remains in southern Quebec along the St. Lawrence River. After spending much of last week near the town of Saint-Henri, where she’d been on March 17, she moved north 13.5 km (8.5 miles) to the edge of Desjardins, across the river from Quebec City. Instead of farmland, she was using a large empty lot next to the Sheraton Levis Convention Centre, across the street from a Subway sandwich shop. Tired of voles, perhaps?

Down in Massachusetts, Chickatawbut continues near the mouth of the Merrimack River, mostly hunting the tidal marshes of Plum Island and Parker River NWR. She was caught on camera with an unusually big mouthful last week — more about that tomorrow. 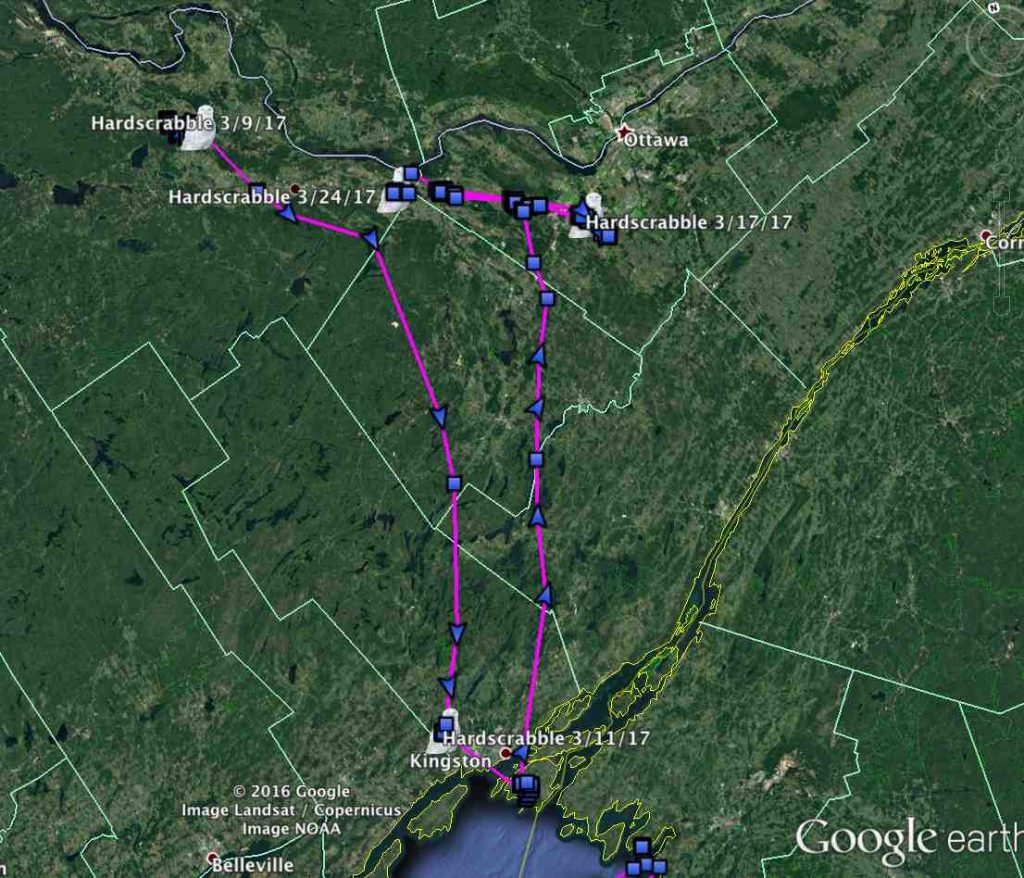 Hardscrabble’s journeys over the past three weeks, from the Ottawa River valley to Lake Ontario, and back. (©Project SNOWstorm and Google Earth)

Up in southern Ontario, Hardscrabble keeps shifting around, showing signs of vernal restlessness. From the outskirts of Ottawa he moved west, right into the same neighborhood — and at times some of the same fields — that Baltimore had been using earlier this winter near Kinburn, before moving west of Arnprior, ON. (The Lafortunes have continued to check that area in case there’s a sign of Baltimore, but no luck — that bird’s clearly gone for the season.) 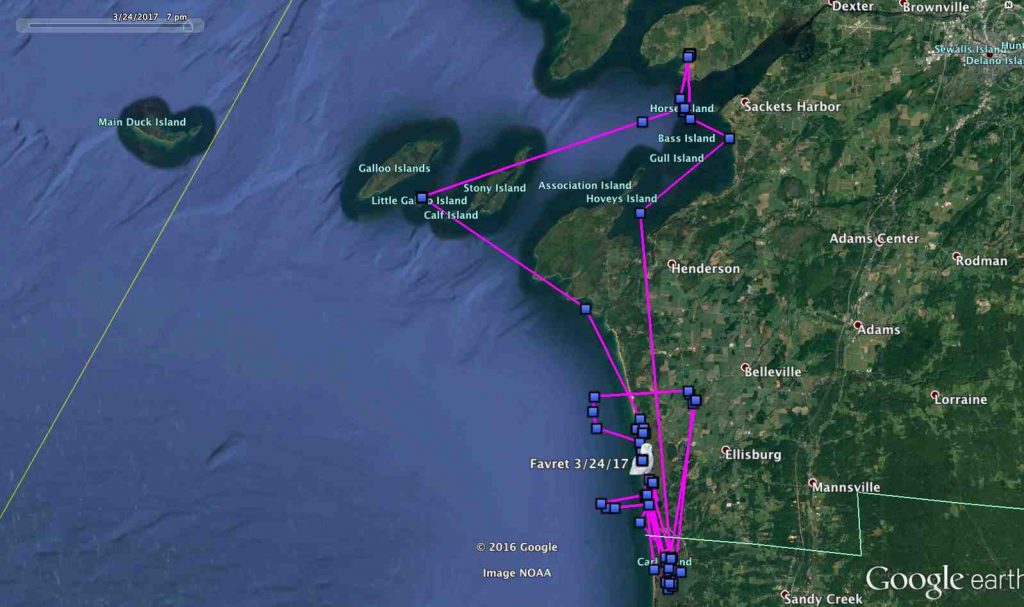 Favret took a flight north over the past week, circling the mouth of the Black River and (presumably) doing a little ice riding — though there’s not much ice on Lake Ontario this winter. (©Project SNOWstorm and Google Earth)

Favret is still hunting along the east side of Lake Ontario, but was ranging farther afield from her favorite spot near Ellisburg, NY. On March 21 she flew north to Little Galloo Island, an Audubon-designated Important Bird Area that hosts tens of thousands of nesting ring-billed gulls and double-crested cormorants in the breeding season. Then Favret moved to either side of the Black River’s mouth, at Pillar Point and Henderson Bay on March 22-23, before winging back south to North Sandy Pond and the lakeshore.

Interestingly, twice during this period — on the 18th and again on the 19th — she spent a couple of hours about two miles (3 km) offshore, moving at an almost imperceptible 0.1-1 knots. Normally we’d assumed she was riding on ice, but NOAA satellite images show basically no ice on Lake Ontario, except for a little in some of the smaller Canadian bays. I can only presume that she’s finding floes of ice that don’t show up from space.

Oswego’s transmitter checked in March 21 for the first time in three weeks, but sent no data — basically just an “I’m alive” message from the device, reporting a battery voltage that’s just above hibernation level. We hope that either the weather on the southeast shore of Lake Ontario will improve, allowing more sun, or she’ll move (and perhaps already has) to an area where the winds and lake moisture don’t conspire to create such constantly cloudy skies.

In North Dakota, Chase Lake finally paid a visit to her namesake national wildlife refuge last Wednesday, making a middle-of-the-night flight seven miles (11 km) south to Chase Lake itself, then scooting west and back to her normal territory at the edge of a large area of center-pivot irrigated fields bordered by prairie near Pettibone, ND.

Dakota is still on her winter territory near Francis, SK, but her transmitter conserved energy by just sending a couple of GPS points on Friday — the same situation as a few weeks ago. Once it gets enough juice it should, as before, send all of the data it’s recording in the meantime. While the forecast is for nearly 100 percent cloud cover early in the week, it calls for clearing skies and improving conditions for the middle and end of the week. On Saturday, local photographer-sisters Kim and Val Mann looked for Dakota without success.

“Many snowies seem to have left (only saw nine snowies during the trip whereas we would normally see around 20),” they reported. “With the warmish weather, about 95% of the snow on the fields has melted and many are under a shallow layer of water.  Around Francis there were a few fields that either had a depression or greenery that caught the snow to form a thick snow cover/ridge that has not melted — mostly in the southwest part of [Dakota’s] range.  These areas are usually in the middle of fields, far from the roads.  If Dakota was perched on one of these, we would not have been able to see her.”