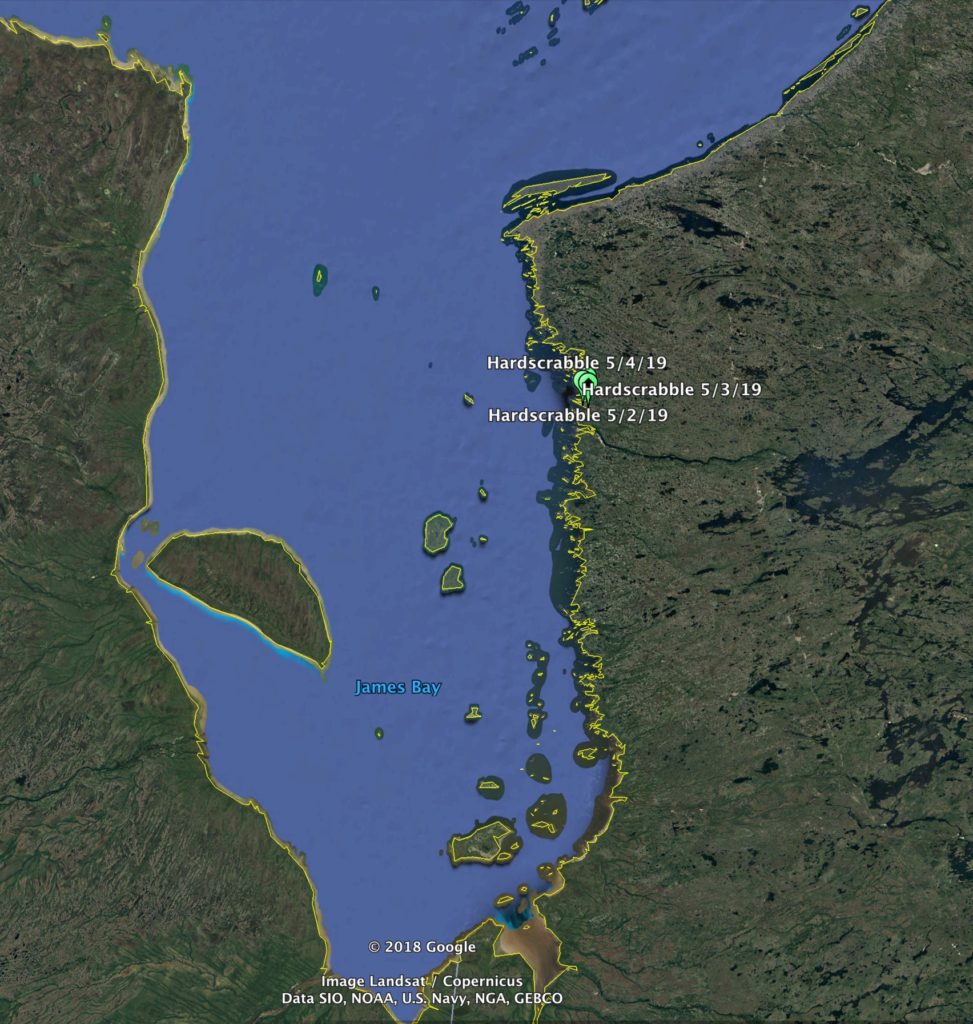 Hardscrabble’s location the past three days, near the mouth of La Grande River. (©Project SNOWstorm and Google Earth)

Things are popping, as spring migration rolls along. Only two of our remaining owls — Pickford, up on Prince Edward Island, and Seneca on the (very rapidly) diminishing ice along the northeast shore of Lake Erie — have been stationary this past week.

Wells continued moving north through southern Quebec, and on April 29 was just south of Lac Saint-Jean, the same route north she’s taken in the past. Will she keep heading north into the Ungava of northern Quebec, where she summered in 2017, or veer far to the northwest, the Arctic Archipelago, where she was last summer? Island Beach, who was also heading north through southern Quebec, hasn’t checked in since April 24, and may already be outside cell range. Otter, who had been hanging out along the Ottawa River, started moving west and north on April 23, and on May 2 was just — barely — over the border into Ontario at Lake Timiskaming.

The past three days, May 2-4, we’ve had a pleasant surprise when we heard from Hardscrabble, who checked in 981 km (609 miles) north of his winter territory near Arnprior, ON. He was along the northeastern shore of James Bay, near the mouth of La Grande River, second only to the St. Lawrence as the biggest river in Quebec. He’s just north of the old Cree community (and historic Hudson Bay Company post) of Fort George, QC, although the community was relocated to the south shore of the river in 1981 and renamed Chisasibi. Except for one cell tower 240 km (150 miles) north on Flaherty Island in Hudson Bay, and a few way up on Baffin Island in the Arctic, this is the last cellular outpost on Hardscrabble’s probable route north, so we’re not likely to hear from him again until winter…unless we get really lucky.

As has been the case for several years now, because of a transmitter glitch we don’t get Hardscrabble’s stored data showing his detailed route, just the current location from which its checked in. If he comes south again next winter, we will resume our attempts to recapture him and remove his transmitter — which may have all that stored data, now comprising several years’ worth, still locked in its memory chip. 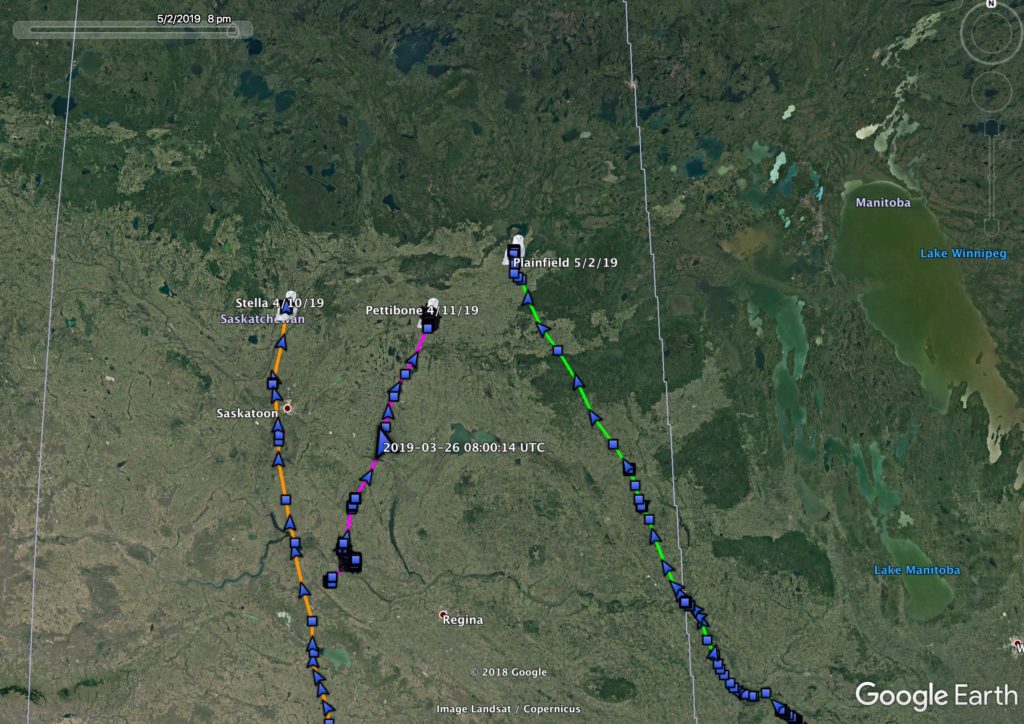 At the very edge of the prairies, Plainfield checked in — for the last time? — as she heads up through central Saskatchewan. (©Project SNOWstorm and Google Earth)

Finally, Plainfield moved several hundred kilometers from southwestern Manitoba up into central Saskatchewan, a position near Tobin Lake on the Saskatchewan River that’s only about 100 km (60 miles) from where Pettibone last checked in. This is right at the southern edge of the boreal forest, and I suspect like Pettibone and Stella (who also migrated up through central Saskatchewan a month or so ago), she’ll be off the grid very soon.

A New Season, a Lot of News
On the Road

4 Comments on “Early May Update”