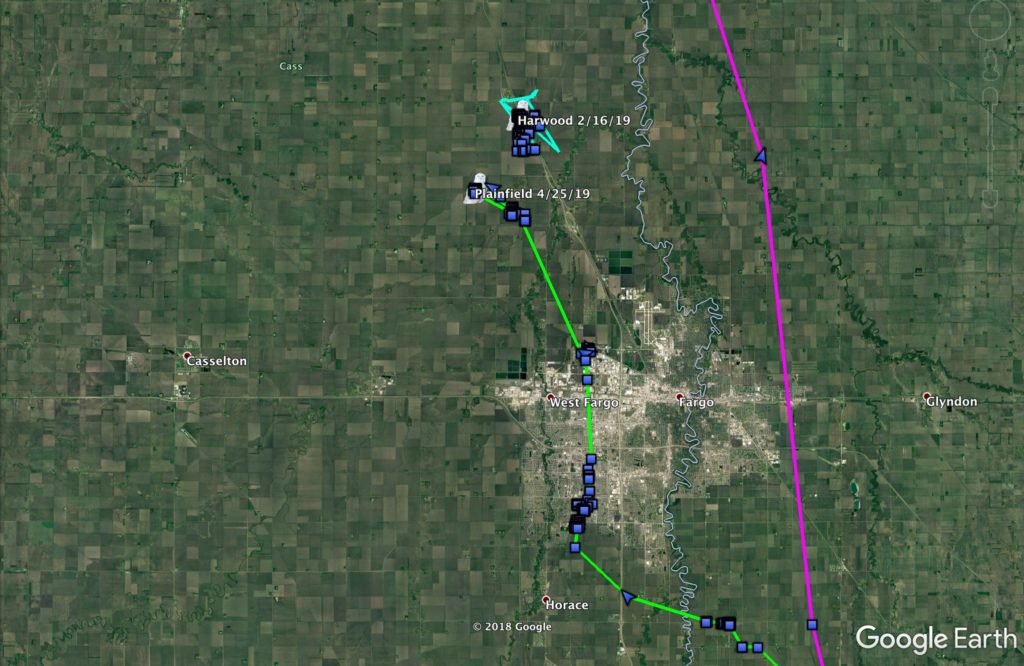 Plainfield (green) has been moving up the Red River valley near Fargo, ND, following the same track as Argus (purple) and close to where Harwood was killed. (©Project SNOWstorm and Google Earth)

The season is winding down, and fewer of our 2018-19 owls are still in regular contact. Most of those that remain look as though they’re pushing north as well.

Plainfield — who has already made a more than 1,280-mile (2000-km) loop from where she was tagged in Wisconsin, up into southwestern Ontario, then south and west through Minnesota — checked in April 25 from just north of Fargo, North Dakota, as she was heading along the Red River of the North valley. In fact, she was following the same course that Argus took several weeks earlier, and her location was close to the town of Harwood — and just a few miles from where the owl of the same name was struck by a vehicle earlier this winter. Fortunately, unlike that bird Plainfield was staying away from the interstate, remaining on gravel section roads and empty fields.

Up on the northern prairies, it’s been more than two weeks since we’ve heard from Woodworth, Pettibone or Stella, and almost a month since Argus was last in touch,  just below the Manitoba border, and it seems likely that all have moved beyond cell range. Hardscrabble vanished from the Ottawa River valley after April 5, and has likewise almost certainly headed north. 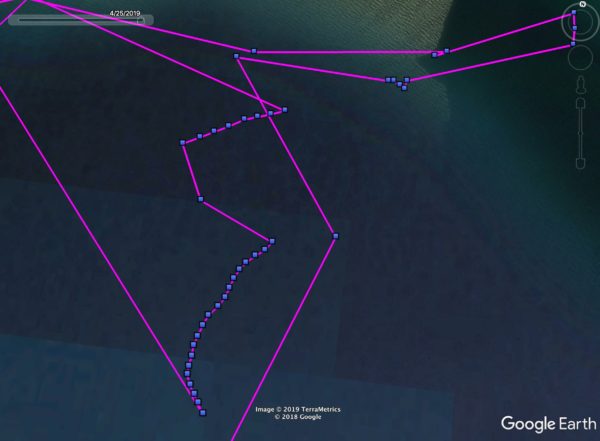 A classic ice-riding signature in Seneca’s track — just going where the wind pushes him. (©Project SNOWstorm and Google Earth)

Seneca is still bobbing around on Lake Erie, hugging the remaining ice on along the north shore between Port Maitland and Morgans Point, Ontario. His track shows the classic signature of an ice-riding owl — neatly even points strung along a gently curving course as the ice floes on which he was sitting were pushed by the wind — very, very slowly. His positions were half an hour apart, showing that he was sometimes moving at a glacial 0.08 km (0.06 miles) per hour.

Otter missed a cellular check-in this week, but at last report was still on Shirleys Bay along the Ottawa River in southern Ontario. Farther east, along the St. Lawrence, Island Beach started moving from his winter territory near Montreal, and on April 24 was about 34 km (21 miles) north of Trois-Rivieres near Shawinigan, Quebec. 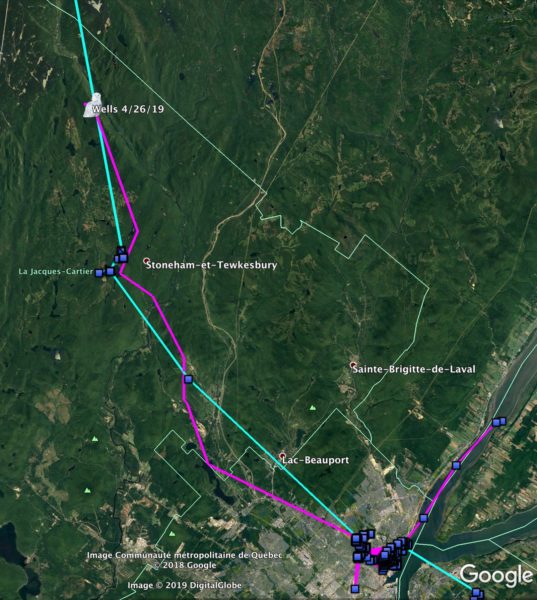 Wells is also moving, right on schedule and course. On April 26 she was heading north of Quebec City, following the same track she took last year on April 20 when she began her migration. Assuming she comes back south next winter, it will be fascinating to see whether she heads due north into the Ungava Peninsula of northern Quebec, as she did in the summer of 2017, or crosses Hudson Bay to the central Canadian Arctic, as she did last summer.

Chickatawbut, whose reappearance last week stunned us, has not checked in since; downloading a year’s worth of data really sapped her unit’s battery, and it’s going to take some sunny days to recover the charge. 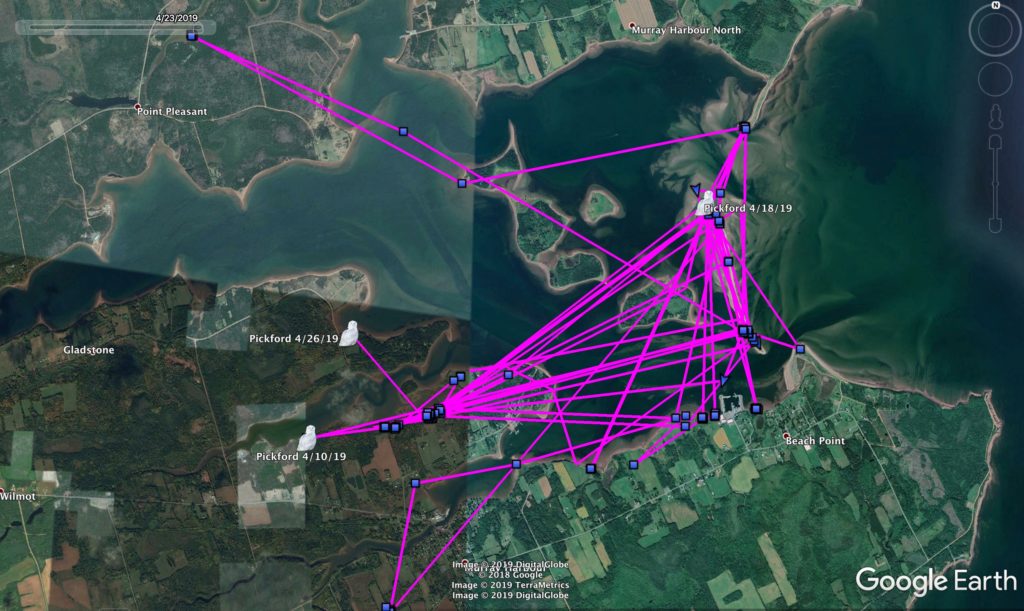 Pickford seems content for now on Murray Harbour, PEI — as a subadult she may not be in a rush to migrate. (©Project SNOWstorm and Google Earth)

Finally, Pickford seems pretty content up on Prince Edward Island, patrolling Murray Harbour at PEI’s eastern end. Unlike many of this winter’s tagged owls, she’s still a youngster, only in her second winter. While no one is certain at what age snowy owls are mature enough to begin breeding (perhaps as much as 4 years old for males), she’s probably still too young, and may not be in rush to head back north.

Early May Update
A Year in the Life of Chickatawbut

4 Comments on “On the Road”