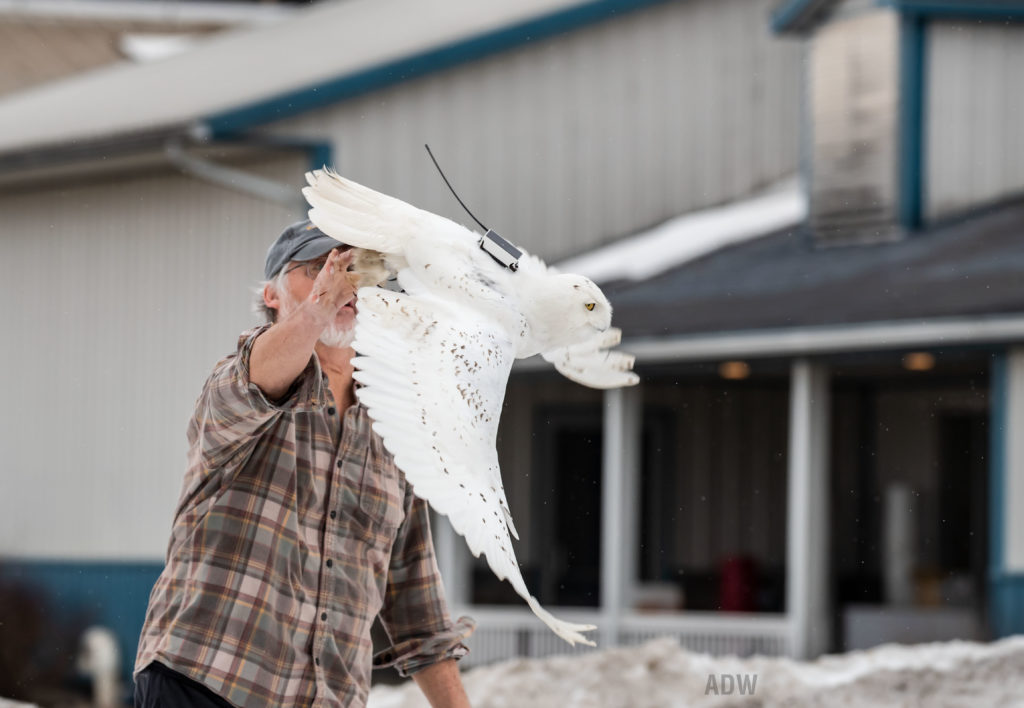 Seneca flies off with his new hybrid cellular/satellite transmitter, the second we’ve deployed on a snowy owl. (©Aaron Winters Photography)

Thanks to Tom McDonald’s tenacity, we have a new snowy owl to follow — our first ever in the Finger Lakes region of upstate New York, and the second owl tagged with one of CTT’s new cellular/satellite hybrid transmitters.

Tom’s had one of the roughest winters of his 30-plus years in snowy owl research, as we’ve detailed here in the past. Some weeks ago he wound up in the ER after a bad fall on the ice carrying heavy trapping gear, and more recently he was back in the hospital with a serious infection in his hand caused by a talon puncture. But not much slows him down, and last weekend Tom was trapping in central New York in his specially modified Honda. (The rear seats have been removed to make room for a two-tiered shelf, traps on top and banding gear below, with a removeable shelf over the front seat for more gear within easy reach.) He also had help from fellow snowy bander Melissa Mance-Coniglio, and Braddock Bay Raptor Research bander Barbara Curtis French. 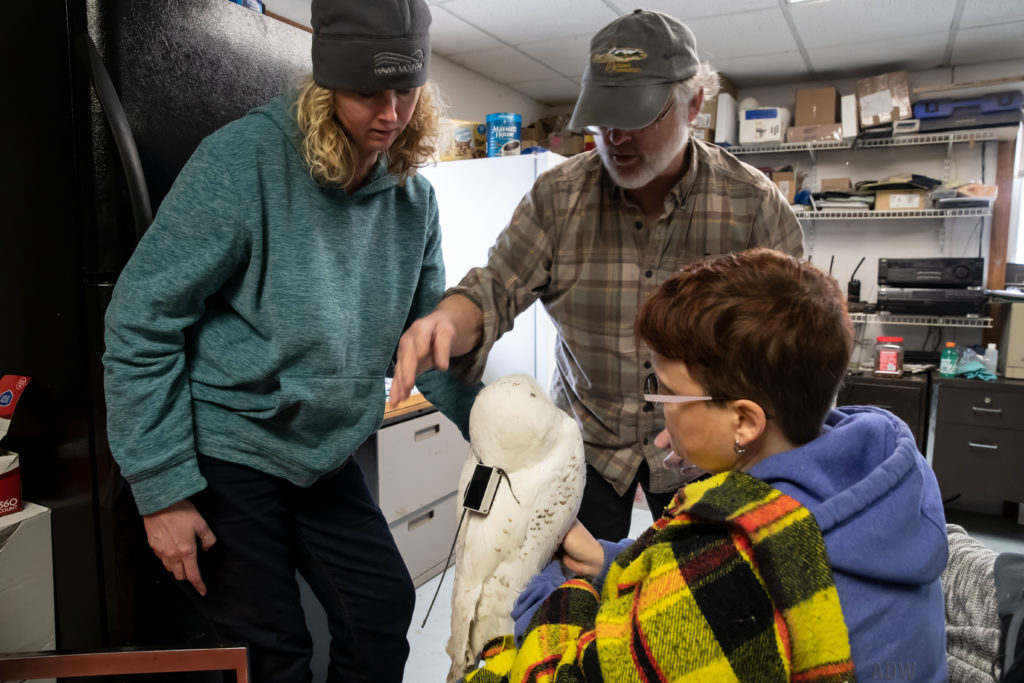 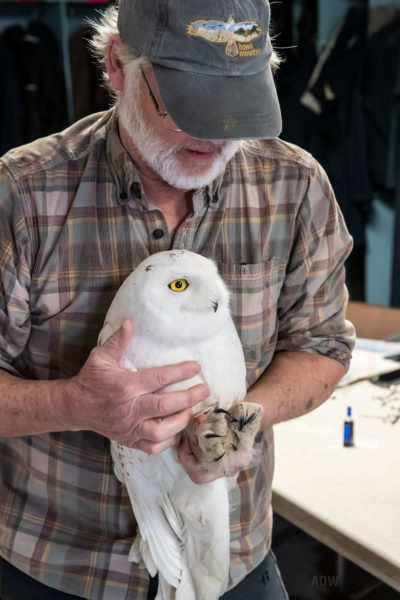 Seneca is an adult male in at least his fifth calendar year. (©Aaron Winters Photography)

The morning of Feb. 22 Tom and colleagues were trapping between the north ends of Seneca Lake and Canadaigua Lake, where they caught an adult male snowy (in at least its fifth calendar year, judging by his molt). Although we use geographic place names for our owl nicknames, the nearest town is Stanley, and we generally try to avoid owl names that are also human names. So Tom recommended we call this bird “Seneca,” both for the lake and the township in which the owl was caught, and as a nod to the Native nation that traditionally occupied this part of the western Finger Lakes.

Tom and his team had particular thanks for the owners of Lawnhurst Farms in Stanley, which made their extended office space available for the tagging operation, warm and out of the weather.

Tom, who had been keeping an eye on the owl all winter, said Seneca had been in the area of Stanley since mid-December. “He shared this piece of real estate with another, younger male  but eventually drove the subordinate owl from the territory after a few weeks,” he said. (Tom captured the younger owl, a third-year bird, in late November and discovered it was one he’d first banded in January 2018,  about 10 miles away.) 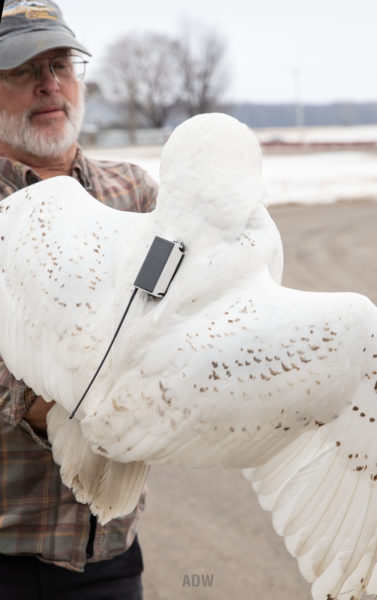 Unlike our cellular-only transmitters, the hybrid units have an antenna that allows the device to communicate with the Argos satellite system. (©Aaron Winters Photography)

Seneca had eluded Tom several times already this winter, ignoring Tom’s rig and lure each time but responding instantly on this latest attempt. In the week since he was tagged, Seneca has been staying in what Tom calls the bird’s comfort zone. “It’s an area that offers plenty of food, little competition and great, unencumbered areas to roost,” he said.

“Once these owls settle into a comfort zone like this (usually by mid- to late December) they will fiercely defend these areas and will stay, until some part of the equation changes — longer days, red-tailed hawks defending nesting areas, roosting locations compromised, etc.,”

Normally we don’t tag new owls this late in the season, because our main goal is to get winter movement data. But because Seneca’s transmitter is one of the new hybrid units, it should provide regular migration and summering data — and because he’s an older, experienced adult, his chances of surviving and returning next winter are especially good.

We’ll have Seneca’s map up soon — watch for it!

Ironically, our other hybrid-tagged owl, Otter, has been off the grid for the past week and a half (to save battery power, his Argos satellite system hasn’t been turned on yet). He last checked in Feb. 14 as he was heading out onto the ice of eastern Lake Ontario off Cape Vincent, NY, and we can only assume he’s still out there, out of cell range — typical behavior for many snowies wintering along the Great Lakes. We do hope he’s OK, because earlier this week winds of more than 70 mph (113 kph) were predicted to raise waves of up to 20-27 feet (6-8 m) on eastern Lake Ontario, and created rapidly moving “ice tsunamis” along some shorelines.

Island Beach remains east of Montreal along the Richelieu River in southern Quebec. In fact, the status quo is the major theme of late. Pickford last checked in Feb. 22, still riding the sea ice between Prince Edward Island and Cape Breton Island in eastern Canada. That same evening, Woodworth was still near Waskada, Manitoba, a short distance north of the U.S. border, and Pettibone was patrolling what is clearly his comfort zone near Aylesbury, SK, where he’s been for two months.

Argus remains in Nobles County, Minnesota, about 16 miles (26 km) northwest of Worthington, and over in Wisconsin, Plainfield is showing a real fondness for center-pivot irrigation rigs, which make great hunting and roost perches.

A Sigh of Relief
Farewell, Harwood