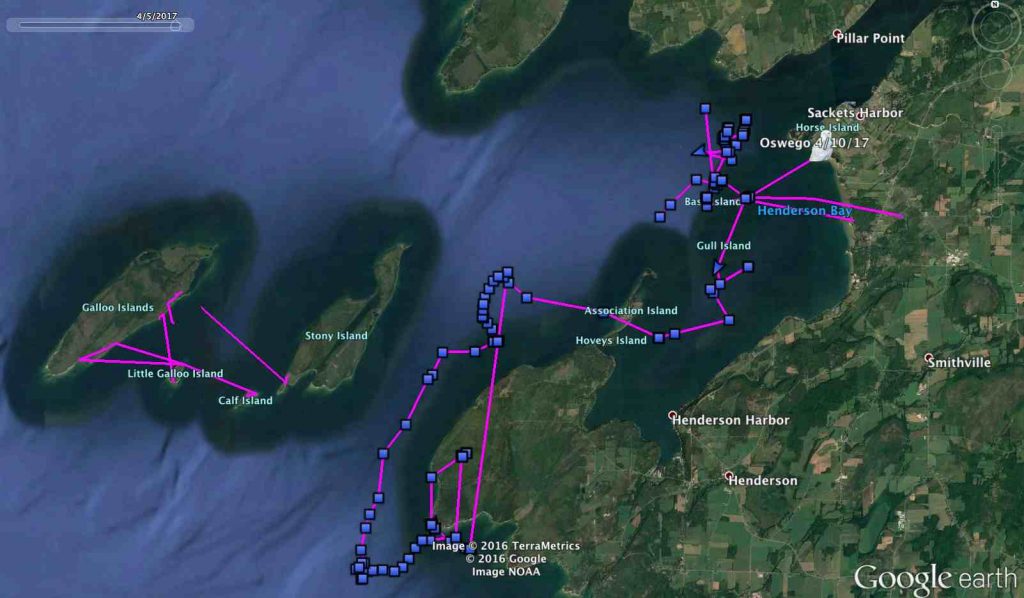 Oswego is back on the grid, and has spent the past month in the Galloo Islands and eastern Lake Ontario — including some ice-riding. (©Project SNOWstorm and Google Earth)

More and more snowies are moving north, dropping out of cell range for the summer — but we were pleased to get a big data dump from Oswego, who had been AWOL for the past month.

Oswego, you’ll recall, had slipped off our radar at the beginning of March, after her transmitter showed a curious lack of solar recharge. Unsure whether the issue was mechanical or the effects of persistent clouds along Lake Ontario, Tom McDonald (who had captured and tagged her) made an effort to find and recapture Oswego but came up dry.

On April 1, however, Oswego check in again, sending incomplete data from the previous month. Two things were clear. The reason Tom couldn’t find her around the town of Oswego is that she had moved out into the Galloo Islands in eastern Lake Ontario, and the issue wasn’t the weather, but a hiccup in her unit. It was only recording lat/longs sporadically, but leaving enough of a trail of data points that we’ve been able to track her movements over the past month or more.

She initially moved the Galloo and Little Galloo islands the first week of March, then later in the month closer to shore, on and around Stony Point and Henderson Bay, just west of Watertown and Sackets Harbor. Oswego spent a lot of time on inshore ice (one of the few places that developed any this winter). A favorite roost was tiny Bass Island, which is where she’s been the past few days, and Boultons Beach on the mainland, site of a British naval assault during the War of 1812.

While we regained Oswego, at least for now, neither Dakota (who was last detected moving north through Saskatchewan) nor Favret (doing the same in western Quebec) checked in since the middle of last week. It’s likely that both have moved beyond the cell network, but maybe we’ll get lucky and they’ll pass one of the growing number of towers at small villages in the North, as Hardscrabble did last spring passing along James Bay. 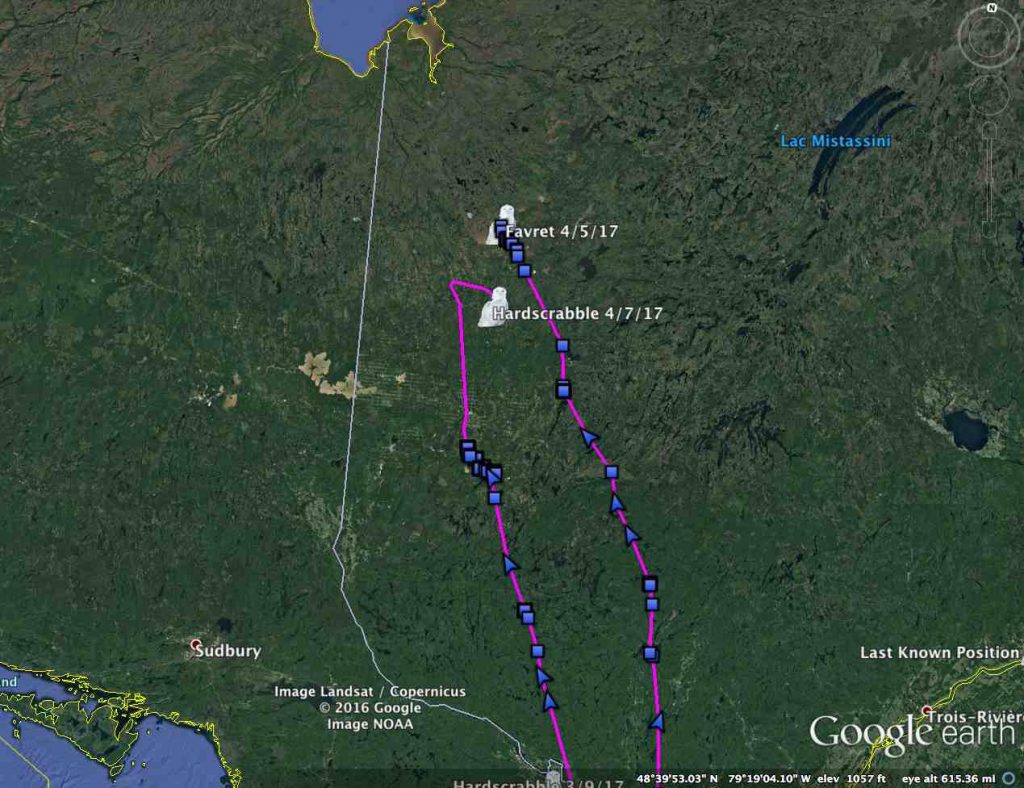 The most recent locations for Hardscrabble and Favret, heading hard for the north through western Quebec. (©Project SNOWstorm and Google Earth)

Speaking of Hardscrabble, we were relieved to see he’d moved well north of the gold mine at Malartic in western Quebec. By Friday evening he’d migrated another 140 km (87 miles) north, hooking a bit to the south in heavily logged forest land south of Matagami. Because his route has been paralleling Quebec Rt. 109, we’d been able to stay in cell contact with him, but north of Matagami the towers are few and far between. And in fact, he didn’t check in Monday night, suggesting he’s moved north beyond the cell network, too.

Chase Lake seemed content to remain near Rice Lake in Burleigh County, North Dakota, where she’d been for the past week, but by Monday evening she’d started moving north, and was not far from the appropriately named town of Wing. Similarly, Wells is still living the urban life in Quebec City, using the street lamps along the waterfront highway for hunting on the shores of the St. Lawrence River. 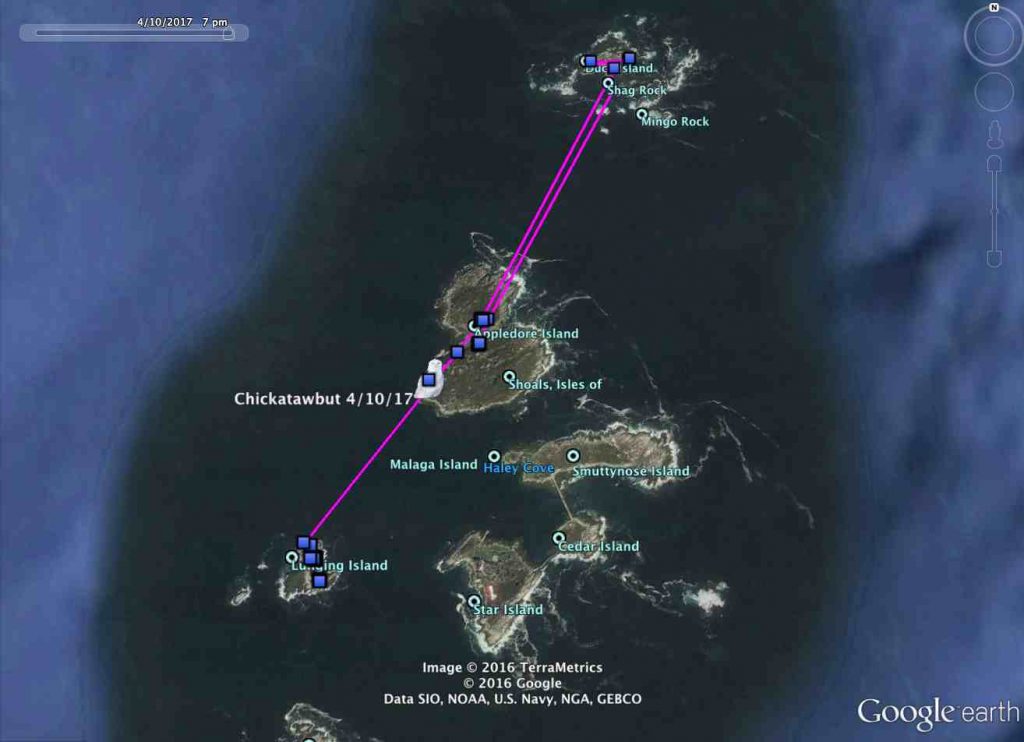 For the second year in a row, one of our tagged owls found her way to the scenic Isles of Shoals — Chickatawbut, this time. (©Project SNOWstorm and Google Earth)

Finally there’s Chickatawbut, who finally decamped from the Massachusetts/New Hampshire coastline and flew out to the Isles of Shoals — the same archipelago on the N.H./Maine line where Brunswick spent several weeks last spring. The islands, which lie about seven miles (11 km) offshore, often host wintering snowy owls, including birds that are sometimes spotted on an island camera operated by the University of New Hampshire’s Shoals Marine Lab on Appledore Island. Last winter, the presence of a large female snowy on Appledore, seen occasionally on the camera, is probably the reason Brunswick avoided that particular island during her time in the Isle of Shoals cluster.

Chickatawbut has had no such compunction, bouncing around several of the islands — White, Star (with its hotel and conference center), Cedar, Smuttynose, Appledore and Duck. It may not have been a completely pleasant visit last week, when truly drenching rains hit the Northeast. A tip of the hat to SNOWstorm supporter and fellow bander Anthony Hill (who bands songbirds on Appledore each year) for forwarding this image from Facebook: 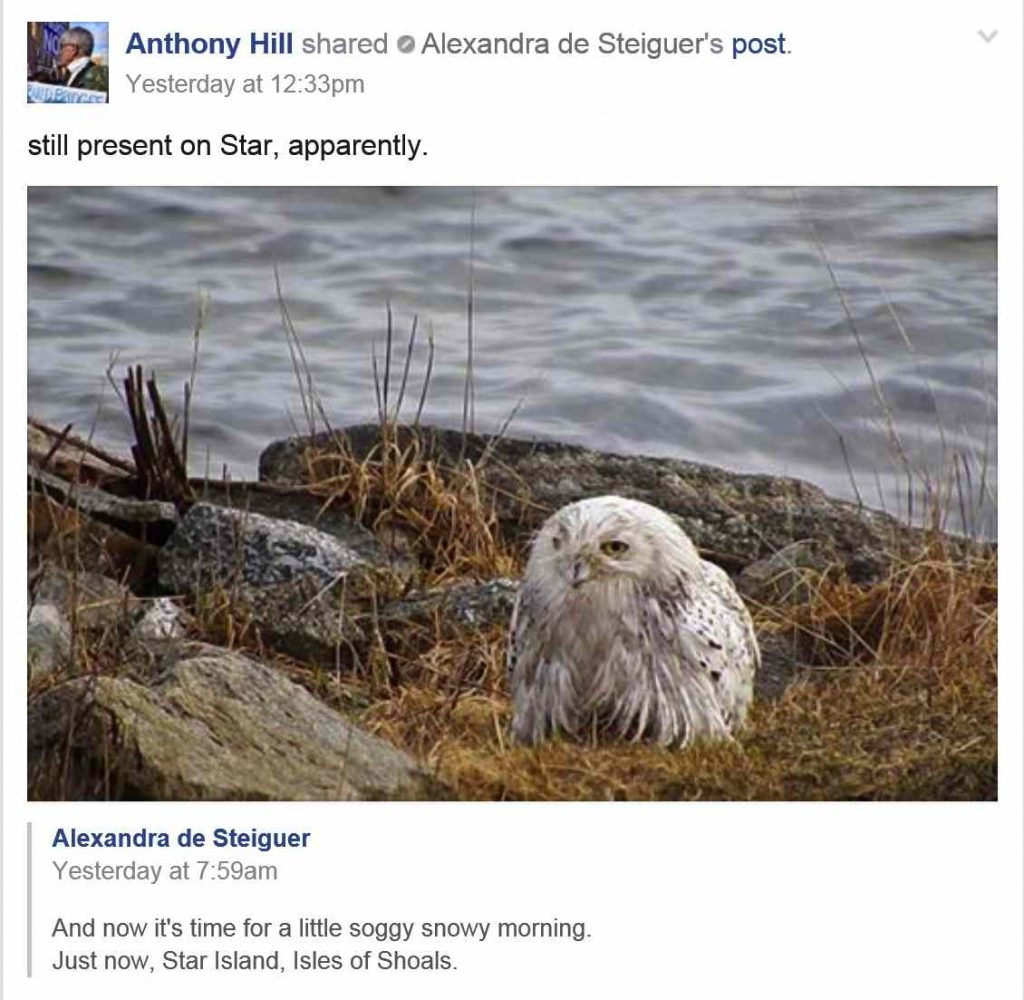 Judging from the time, that exceedingly wet, not-very-happy-looking snowy owl in the photo was Chickatawbut, probably wishing she was some place where the precipitation stays frozen.

Through the North Woods
Oh, Canada!