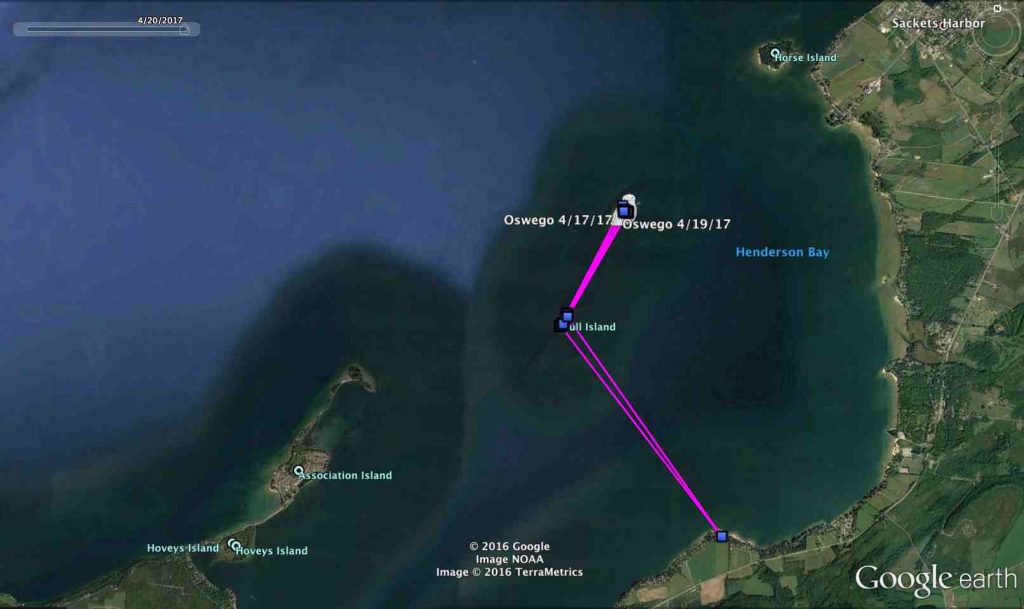 The last owl south of the Canadian border, Oswego is staying well offshore in Lake Ontario on Bass and Gull islands — no doubt to the consternation of the heron and gull colony on the latter. (©Project SNOWstorm and Google Earth)

We’ve seen some big movements within the past week, and only one tagged owl (that we know of) remains on its wintering grounds.

That one is Oswego, who is still hanging out on little Bass Island in eastern Lake Ontario, with occasional side trips to the mainland and even tinier Gull Island — this last a state wildlife management area with nesting colonies of black-crowned night-herons and herring gulls, who may not appreciate the hungry attention of a snowy owl. (Bass Island is privately owned.) After earlier issues with its voltage, the transmitter appears to functioning perfectly.

Everyone else appears to be on the move. Chickatawbut, who had been among the Isles of Shoals off the New Hampshire/Maine coast for the past couple of weeks, has dropped off the grid for the past week; she’s either moved to a more remote offshore island with no cell service, or she flew quickly north across Maine and southern Quebec and got north of the cell network between check-ins. 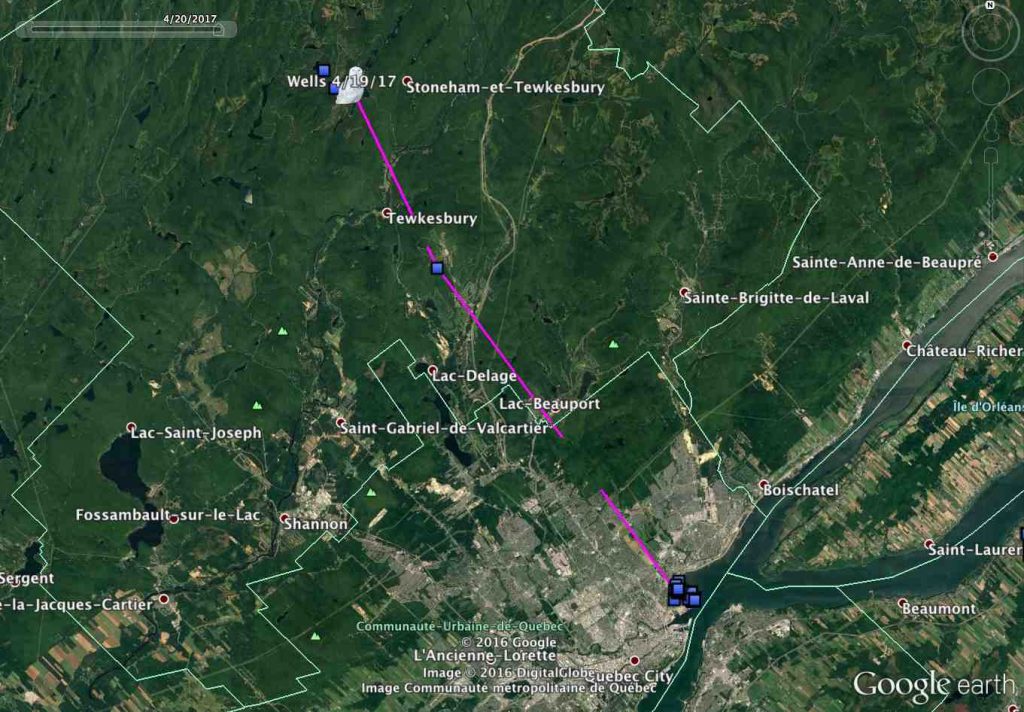 Wells, who had been lingering in Québec City since mid-March, has finally felt the pull of the north. Wednesday evening when her unit checked in we found she had moved 37 km (23 miles) to the northwest, into forested country near Stoneham-et-Tewkesbury, along Lac Saint-Thomas, QC. 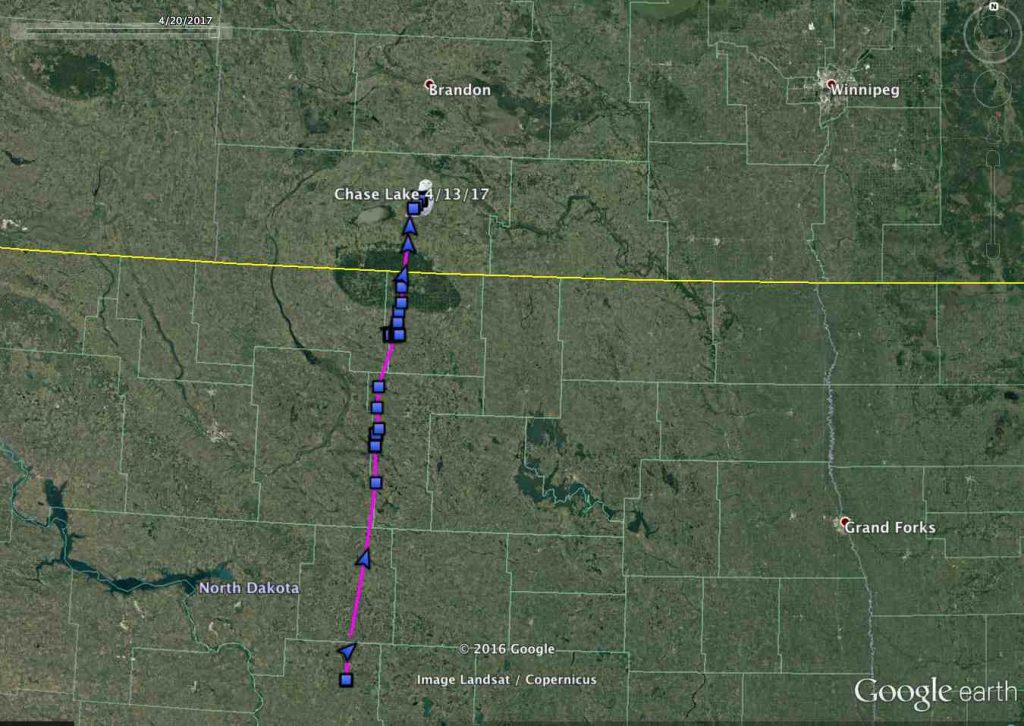 No meandering any more for Chase Lake — she’s making a beeline for the north through North Dakota and into Manitoba. (©Project SNOWstorm and Google Earth)

Chase Lake, who had seemed content to mosey around eastern North Dakota, also got the travel bug. On April 11 she started migrating due north, and by April 13 she had crossed the border into southern Manitoba, just south of the small town of Minto in the Pembina River valley. In all, she’d moved about 244 km (152 miles) from her winter territory. 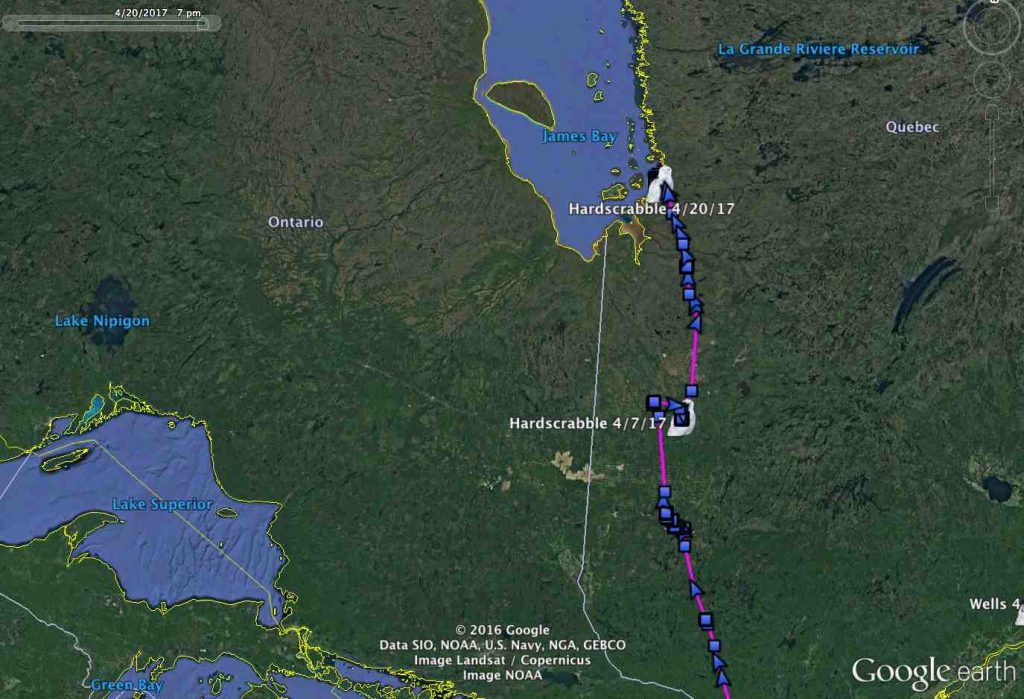 But the real surprise was Hardscrabble. We’d last gotten a transmission from him on April 7, deep in the boreal forest of western Quebec, and the silence that followed suggested he might be off the grid for the summer. On Thursday night, however, he unexpectedly checked in and downloaded almost 600 GPS locations, tracing his movements 309 km (192 miles) to the southern edge of James Bay, near the mouth of the Eastmain River — or what’s left of it, since 90 percent of the Eastmain’s original flow was diverted into the La Grande River as part of the massive James Bay Project hydropower development in the 1980s. 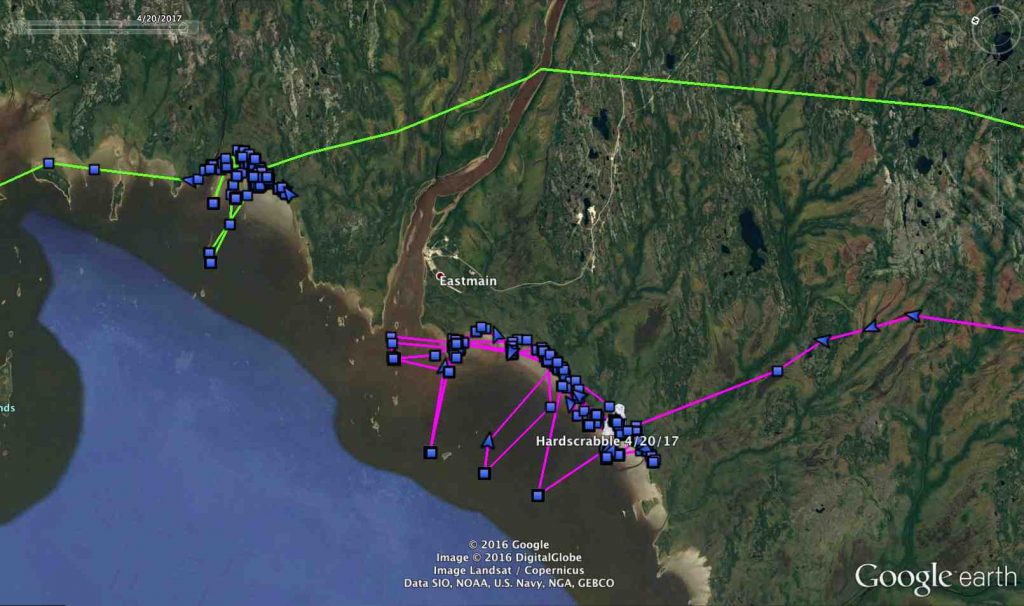 A comparison of Hardscrabble’s 2016 route (green) and current movements (purple) near the mouth of the Eastmain River on the southeastern shore of James Bay. (Note that in this map, north is to the upper left.) (©Project SNOWstorm and Google Earth)

This is a place Hardscrabble knows, since he stopped off here last spring for an extended period on his way north, using the bayshore north of the river instead of just south of it. He’s a bit of ahead of schedule this year. In 2016 he arrived on the Eastmain April 21 and remained for eight days; this year he arrived April 10, and it remains to be seen how long he’ll stay. (Technically, he’s moving back and forth between Quebec and Nunavut, since the provincial boundary arcs along and occasionally across the shoreline in this area.)

Hopefully he’ll remain on the coast, and avoid the airstrip at the Cree village of Eastmain just inland from the river mouth — which is also one of the last cell outposts along the James Bay shore. Time will tell if we get another batch of data from him, or if he, too, will go dark for the summer.

And Then There Was One
On and Off the Grid