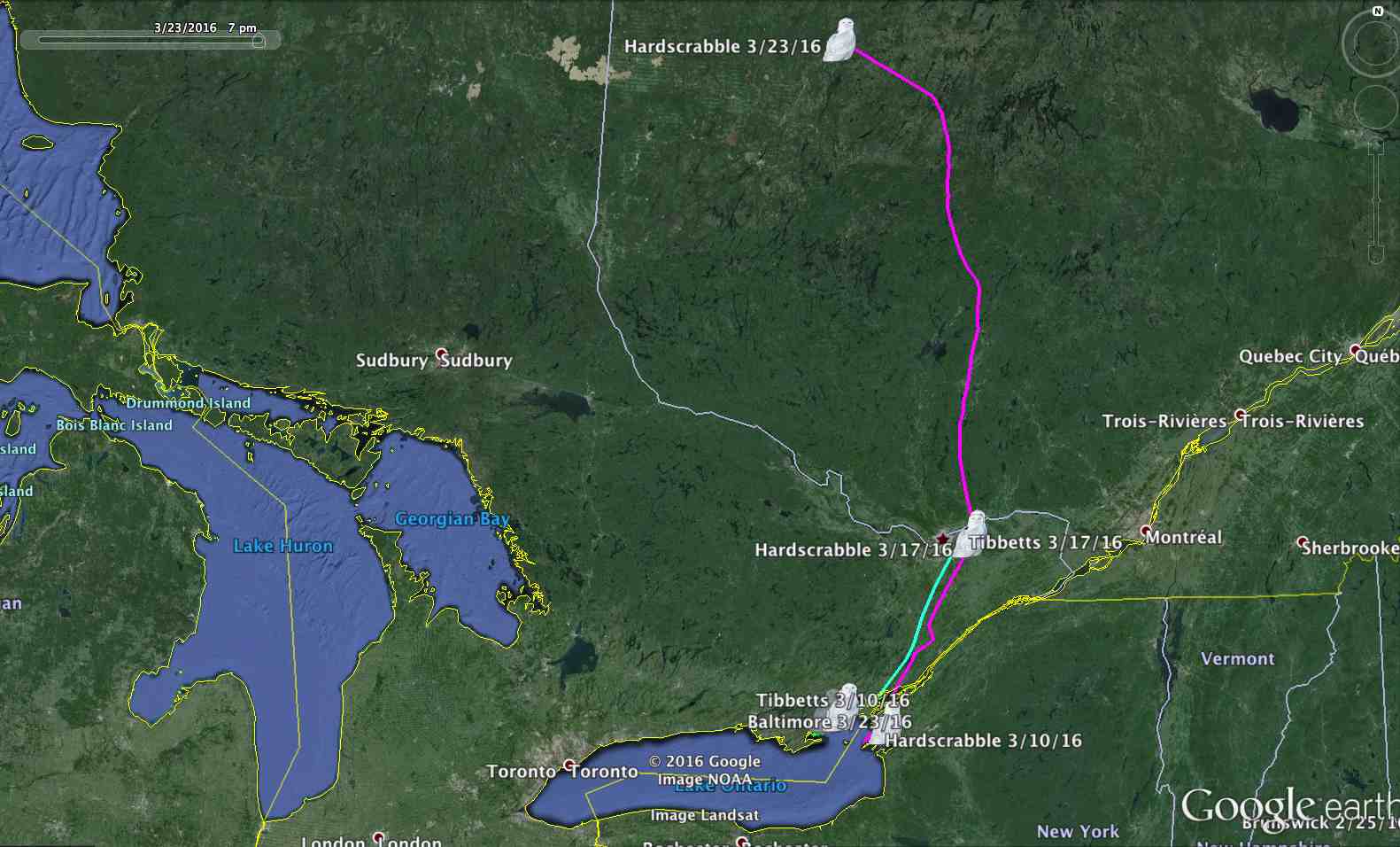 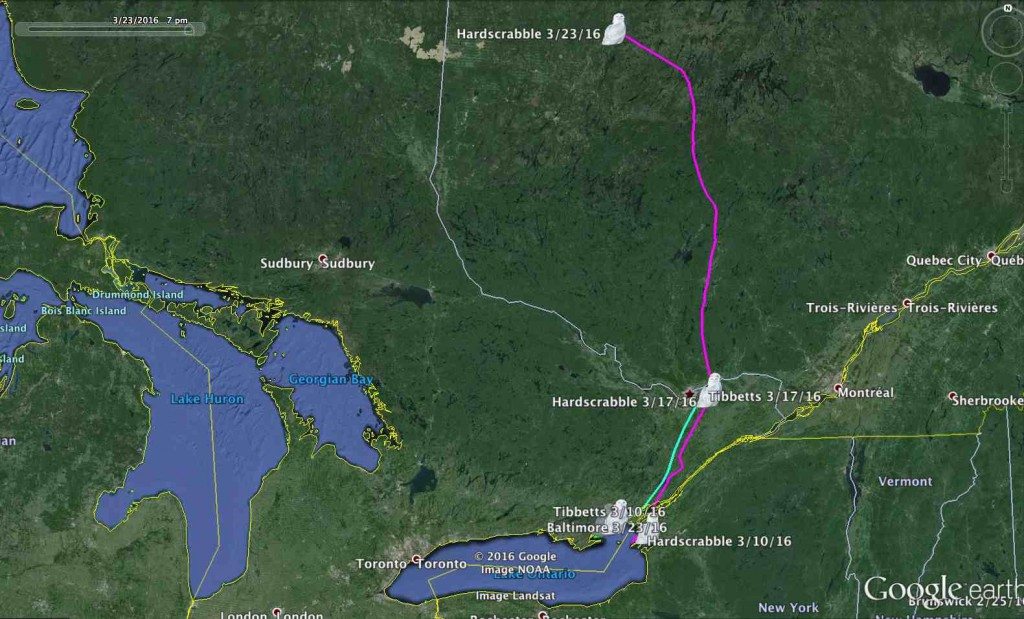 Both Tibbetts and Hardscrabble moved north to the Ottawa River valley last week, and an unexpected transmission from Hardscrabble on March 23 showed he’d moved well up into western Quebec. (©Prioject SNOWstorm and Google Earth)

There’s no longer any doubt that spring is pulling many of our tagged snowy owls back home toward the Arctic. In the past week we’ve seen several birds make flights north, while others have dropped off the grid, apparently having moved beyond cell range.

For example, Hardscrabble and Tibbetts both left their wintering grounds on the northeast shore of Lake Ontario — Hardscrabble on March 13, and Tibbetts three days later. They followed close, parallel paths to the northeast, and on March 17 were roosting only 3 km (1.8 miles) from each other on the farmland along the Ottawa River near Cumberland, Ontario.

Hardscrabble then pushed on much farther north. On March 23 he checked in again (off-schedule; we’re not sure why), showing that he’d flown another 473 km (294 miles) northeast to near Lebel-sur-Quévillon, Quebec, more than halfway to James Bay.

Several of the owls we’ve been following this winter have apparently already headed north. Dakota was last in contact on March 3, when she was still hanging out in Stutts County, ND — and then she wasn’t. Biologist Matt Solensky, who with Dave Brinker trapped and tagged this owl in January, spent time scouting the area, and found four other snowy owls — as well as a lot of mallards, pintails and wigeon on the pothole lakes and marshes. But no sign of Dakota.

Not coincidentally, both Flanders and Casco vanished from the grid at about the same time, as unseasonable warmth flooded the region. Casco had been on the edge of the Gaspé Peninsula in Quebec, and Flanders was on the Ontario mainland close to Amherst Island. Both were only a few hundred miles — an easy flight — from the northern edge of reliable cell coverage in southern Canada. They may just be in dead zones, but it’s increasingly likely we won’t hear from them again until they come south once more.

Not all our owls were on the move last week. Baltimore remains on Amherst Island, mostly hanging out in the small territory he’s been using all winter — although he spent some time on the fast-disappearing ice between Amherst and Simcoe islands, perhaps a sign of growing restlessness. Chaumont moved from Cape Vincent, NY, where he’s been for quite a while, to Wolfe Island just across the Canadian border. His transmitter remains in a funk; we get a current location, but no data, and Tom McDonald’s repeated attempts to retrap him over the past two months to recover the unit have all come to naught. 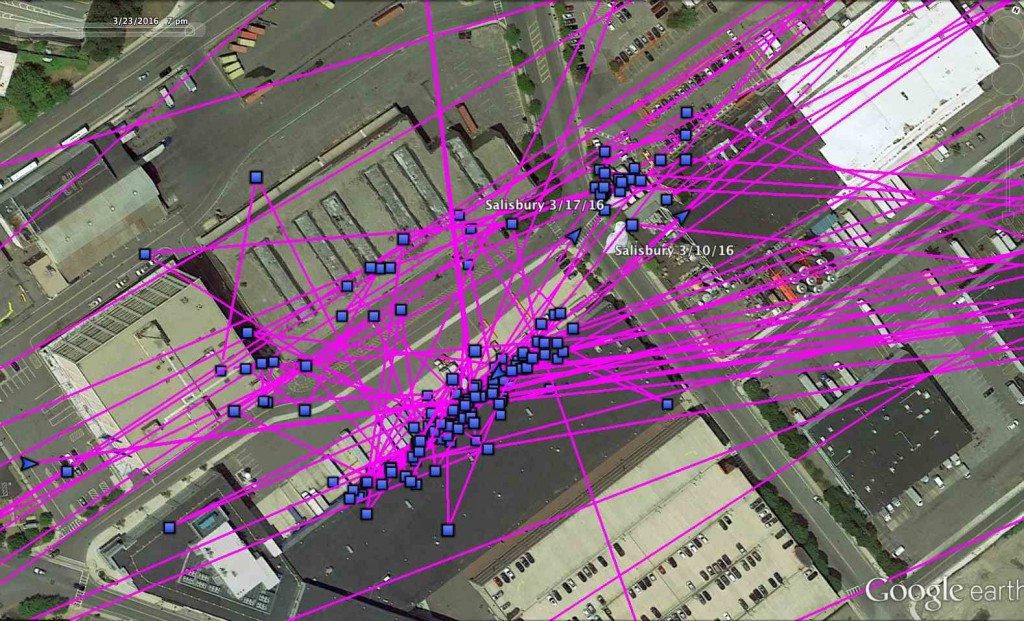 Salisbury’s favorite Boston eatery: A trucking center across the street from a major brewery along the Charles River. (©Project SNOWstorm and Google Earth)

In New England, Wampum continues to move between the T.F. Green Airport in Providence, R.I., and the Quonset Point Air National Guard airfield farther south along Narragansett Bay, two places we’d really prefer she avoided; she can’t head north soon enough to suit us. Similarly, Salisbury has settled into a routine of roosting at Logan Airport in Boston, then hunting the area around a major brewery in the Seaport District across the river.

He’s especially fond of perching on the tractor trailers at a trucking distribution center across the street from the brewery. One of the SNOWstorm team that checked out the site reports an abundance of rats in the area…and, worryingly, rat poison bait stations. Rodenticide poisoning, especially from so-called second-generation anticoagulants that professional exterminators are permitted to use, is a serious and growing problem for raptors. Up to now we’ve been most concerned about Salisbury’s habit of hanging out at the airport, but maybe we need to be more concerned about his choice of eateries. 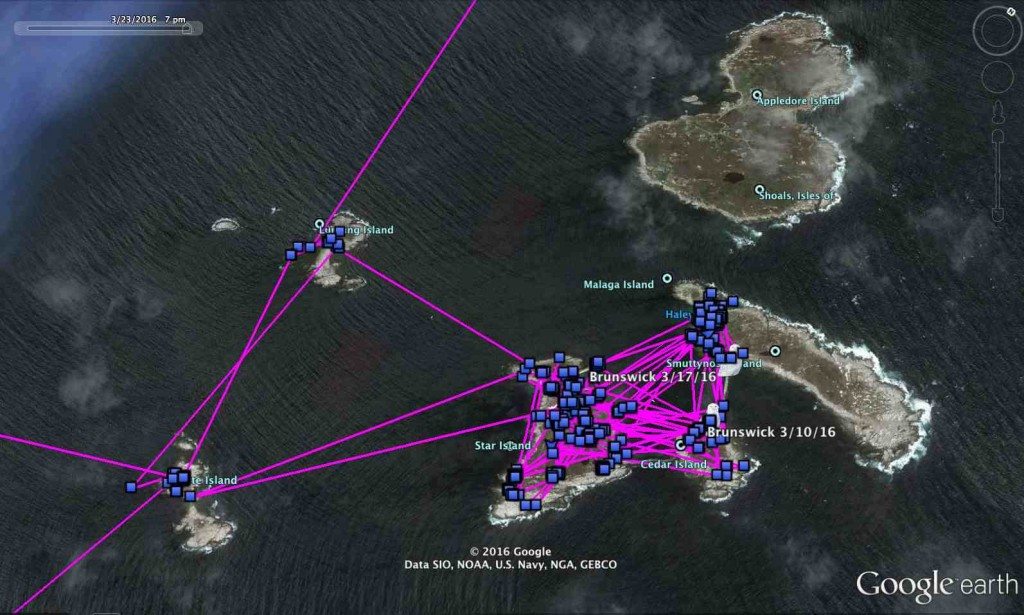 Brunswick is all over the Isle of Shoals — except for Appledore Island, where another snowy has been in residence all winter. (©Project SNOWstorm and Google Earth)

Farther north along the coast, Merrimack remains at the mouth of her namesake river, where she was released a few weeks ago, hunting the tidal marshes and dunes around Plum Island, Salisbury Beach and the saltmarsh areas. And off the New Hampshire coast, Brunswick remains on the Isle of Shoals about six miles (9.7 km) offshore. She’s used three of the four major islands, and several of the small rock/ledge clusters, but has stayed strictly away from Appledore Island, the largest in the archipelago — and an island that’s had a resident snowy all winter, according to researchers with the University of New Hampshire. Snowies can be fiercely territorial, and judging from the tracking data, this may be a case of territorial exclusion.

Can You Help With the Final Sprint?
Buckeye's Bonanza