Chickatawbut was a busy girl the past year, migrating to the central Canadian Arctic last summer. (©Project SNOWstorm and Google Earth)

Snowy owls never fail to surprise us, but we really got a shocker this week when Chickatawbut phoned home — almost exactly a year since the last time we’d heard from this particular female. 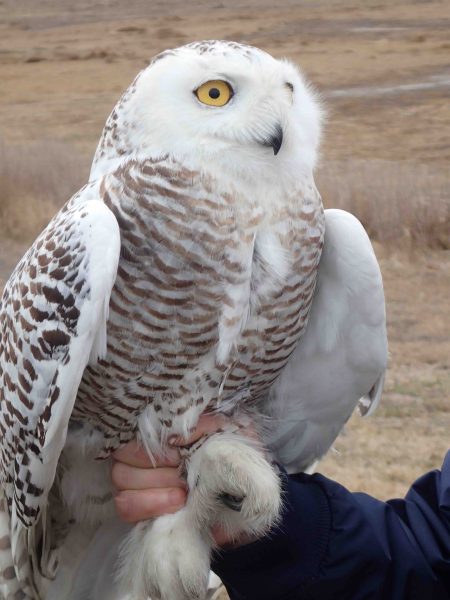 SNOWstorm co-founder Norman Smith, from Massachusetts Audubon, captured her as a juvenile in March 2017 at Boston’s Logan Airport, tagged her and released her at Salisbury Beach, MA. That spring she headed north into the Ungava Peninsula of northern Quebec, returning last winter to the farmland near Louiseville, QC, along the St. Lawrence River midway between Montreal and Quebec City. Her last transmission of data was from there on April 18, 2018. She reconnected with us Friday night — April 19, 2019.

Now we know that she started north April 23, 2018, migrating essentially due north up the Ungava, as she had the previous year — but this time, she kept going. On June 9 she crossed Hudson Strait to the Foxe Peninsula of southern Baffin Island, then flew across the 274 km- (171 mile) wide Foxe Basin, still mostly ice-covered, to the Melville Penisula. Only after reaching the Brodeur Peninsula, at Baffin Island’s extreme western end, did she turn around.

Chickatawbut spent the rest of the summer on the Melville Peninsula, slowly moving south to Southampton Island (which largely blocks the entrance to Hudson Bay) by the beginning of October. She did not nest, but at less than three years old she likely wasn’t old enough to do so. As autumn deepened, Chickatawbut recrossed the bay to the Ungava Peninsula and hugged the southern coast of Ungava Bay, remaining until at least Oct. 27, when her transmitter went into hibernation mode because it wasn’t getting enough solar recharge during the rapidly shrinking subarctic days. 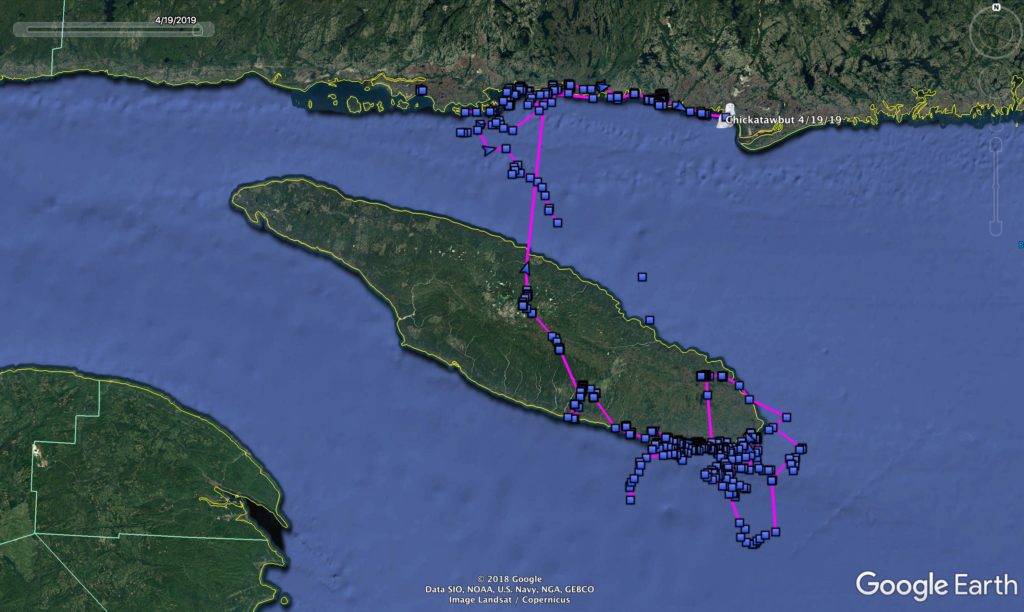 The past two months, Chickatawbut was on and around Anticosti Island, north of the Gaspé Peninsula in the St. Lawrence. (©Project SNOWstorm and Google Earth)

We don’t know for sure, but it seems likely Chickatawbut stayed north through much of the next two and a half months, because her transmitter didn’t recover its charge until Feb. 16 of this year, by which time she was on the north shore of the St. Lawrence’s wide mouth, not far from the town of Havre-St.-Pierre, QC. She spent most of the past two months on îl de Anticosti, the 7,800 sq. km. (3,100 sq. mile) island that noses like as diving fish in the middle of the St. Lawrence’s mouth. The night of April 2-3 she crossed again to the mainland, and Friday night (April 19) she was near the small town of Natasquan, an Innu (Montagnais) First Nations settlement.

Chances are she’ll be heading north again soon — and if so, we’re especially fortunate, because the cell tower at Natasquan through which she connected last night is the only one along more than 460 km (265 miles) of that wild and lonely coast.

Here’s a roundup of what everyone else in this winter’s crew has been up to, moving east to west.

Pickford remains on Prince Edward Island, in and around the fishing village of Murray Harbour and its namesake body of water. On the mainland, Wells last checked in on April 10, when she had moved down the St. Lawrence a bit from Quebec City next to île d’Orléans. Island Beach was also slowly moving down the St. Lawrence valley, shifting about 81 km (50 miles) northeast to near Berthierville, QC between April 10-18.

Otter was moving again, once more flying along the upper St. Lawrence and then north toward Ottawa, circling the city and then moving west along the Ottawa River, which is nearly 3 km (1.8 miles) wide at that point. April 18 he was near Shirleys Bay, ON. Like Otter, Seneca is sporting one of CTT’s hybrid cellular/satellite transmitters. He remains out on the lingering ice at the eastern toe of Lake Erie, south of Port Colborne, ON.

No word from Hardscrabble since April 5 near Ottawa — it seems likely this adult male flew the coop and is heading north to find a breeding territory. 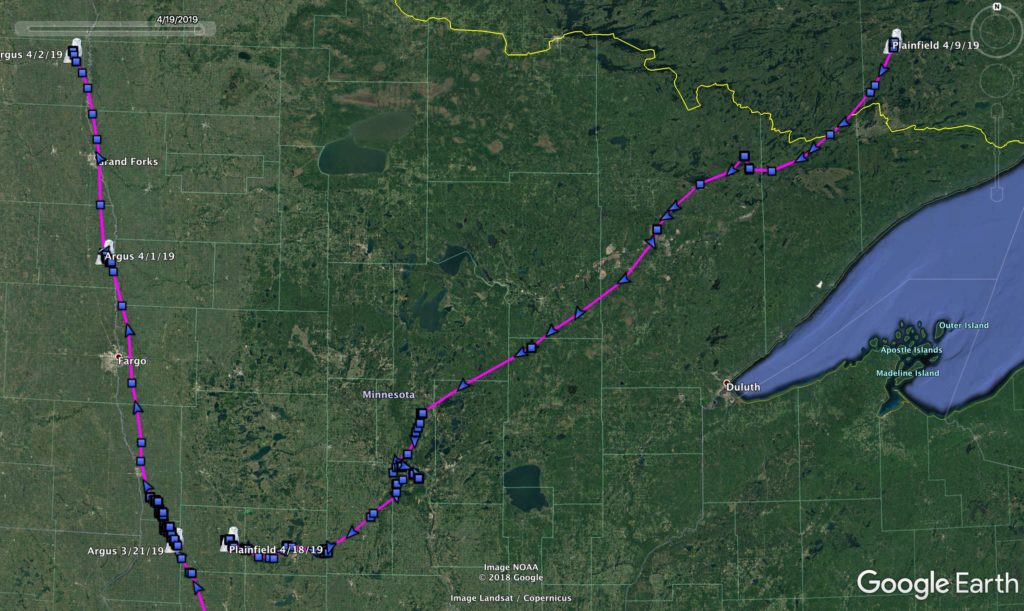 North, then southwest, now –where? Plainfield can’t seem to make up her mind. (©Project SNOWstorm and Google Earth)

Out in the western Great Lakes region, Plainfield appears not to be able to make up her mind. At the beginning of April she was heading north into western Ontario, but then she made a U-turn and came back south to within a few miles of the U.S. border. She crossed back into the States on April 10, flying southwest through central Minnesota near Brainerd, then headed west to Grant County, MN, by April 18, covering 370 miles (594 km) altogether. Her last location wasn’t far from the track Argus took north in late March. And speaking of whom, we’ve not had a transmission from Argus since April 2 in Walsh County, North Dakota, north of Grand Forks. That’s a bit worrisome — he wasn’t far from Interstate 29, along which Harwood was killed by a vehicle — but he may just be out of cell range.

Similarly, we’ve not heard from Woodworth since April 3, when he was still in Bottineau County, ND, just south of the Manitoba border. At this time of year, the sudden disappearance of an owl often means the bird moved rapidly north into an area without cell coverage; after all, that’s what Chickatawbut did last spring, as we now know.

Finally, Pettibone last checked in April 11 near Beatty in central Saskatchewan. Like Stella, who had transmitted data on April 10 just 125 km (78 miles) to his west, Pettibone would have to be very lucky to hit a cell tower once he started moving north into the boreal forest, and both those owls may be off the grid again for the summer.

On the Road
Stella!

One Comment on “A Year in the Life of Chickatawbut”