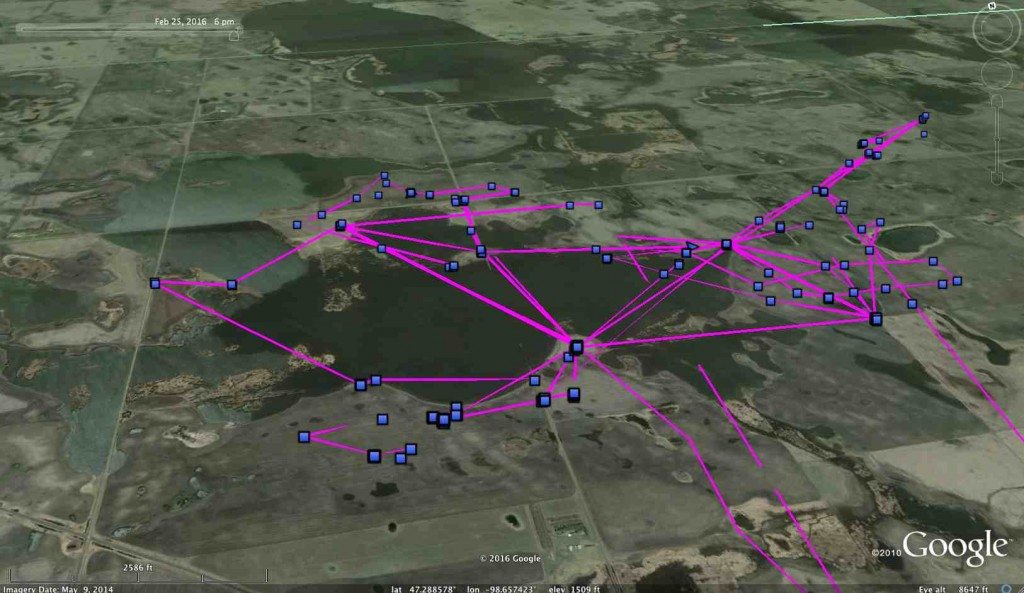 Dakota loves the margins of these lakes and marshes on the North Dakota plains. (©Project SNOWstorm and Google Earth)

It’s been an exciting week with our two new owls, Hardscrabble and Casco, but of course we still have a lot going on with our other tagged snowies — so let’s get to the update.

Starting out West, Dakota continues to shift between her northern and southern hunting areas in the northeastern corner of Stutsman County, North Dakota, this fascinating bimodal pattern she’s been following since we tagged her. She spent most of her time last week around several lakes between Courtenay and Kensal, then made a quick transit south to her secondary activity area southwest of Courtenay. With things opening up and the first waterfowl heading north, those lakes are going to be even more attractive to a hungry owl

On Amherst Island, Flanders failed to check in this week, but Baltimore and Tibbetts were still on the grid — and on the ice. Baltimore was dividing his time between the center of the island, the ice on the bay, and the mainland shore.

Tibbetts, as has been his habit, was roaming widely again. He started off well out into Lake Ontario on the shrinking ice field, then moved north across Prince Edward Point, did a little ice-riding with the wind (which was carrying him northeast, the direction he’d been heading anyway) and wound up on the channel between Amherst and the mainland. He and Baltimore crossed paths a few times — it’s hard to say if they were interacting with each other or not, but Tibbetts didn’t seem to linger too close to Baltimore’s territory near Stella.

Tibbetts wasn’t the only one with wandering feet. Salisbury did a 35-mile (56 km) loop around the greater Boston area on Feb. 20, flying north of Stoneham and Wakefield, then east through Saugus to the Nahant causeway and back — to Logan airport, the one place we didn’t want him to go. For the first time in several weeks, he spent a significant amount of time at Logan on the 24th and 25th, much of it next to the FedEx and American Airlines cargo facilities at the southern edge of the airport. Let’s hope he stays safe, and doesn’t make a habit of this.

Up in Maine, Brunswick was a real homebody this past week, not straying beyond a two-mile (3 km) area around Wells Beach — none of the longer flights to Kennebunkport or south to Ogunquit we’ve seen in previous weeks. And she continues to show off for visiting birders, like these great images by Laurie Pocher on eBird.

Speaking of photos, we got pictures this past week of a tagged owl in southern Ontario, near Drayton and Elmira — but none of the birds we’re actively tracking are there. It’s a very white bird, likely an adult male, and the transmitter housing looks like one of the handmade prototype units we used our first winter.

We suspect it’s Erie, first tagged two winters ago. His transmitter has been in sporadic contact the past couple of weeks, sending bits and pieces of data at unpredictable intervals — not even a current location, but that area is very close to where he wintered last year. We’re working with Canadian colleagues to see if they can relocate and capture him, and remove what appears to be a faulty unit.

I mentioned that Flanders was off the grid this week. She may have just been in a dead spot, but we also had some unseasonably mild weather this past week — and with March beginning, we need to think about when these owls will be heading north.

The past two years, most of the snowies we were tracking were juveniles and subadults, but this year we’ve tagged all adults, many of them at least three years old, if not more. No one knows how old a snowy owl must be to reach maturity, but three or four years seems likely. If so, these owls may be in a far greater hurry to get back to the Arctic to find a mate and stake out a nesting territory. In the past, some of our owls have lingered into late April and May, but they were mostly youngsters. Will these adults stick around that long — and could Flanders already have moved north beyond the limited cell coverage of southern Canada?

Personally, I still think she’s around — but I also think the time is coming fast when we’ll start to see our birds getting restless, and thinking about their homes in the north.

Baltimore: The Rest of the Story
Casco: Northward, Ho!