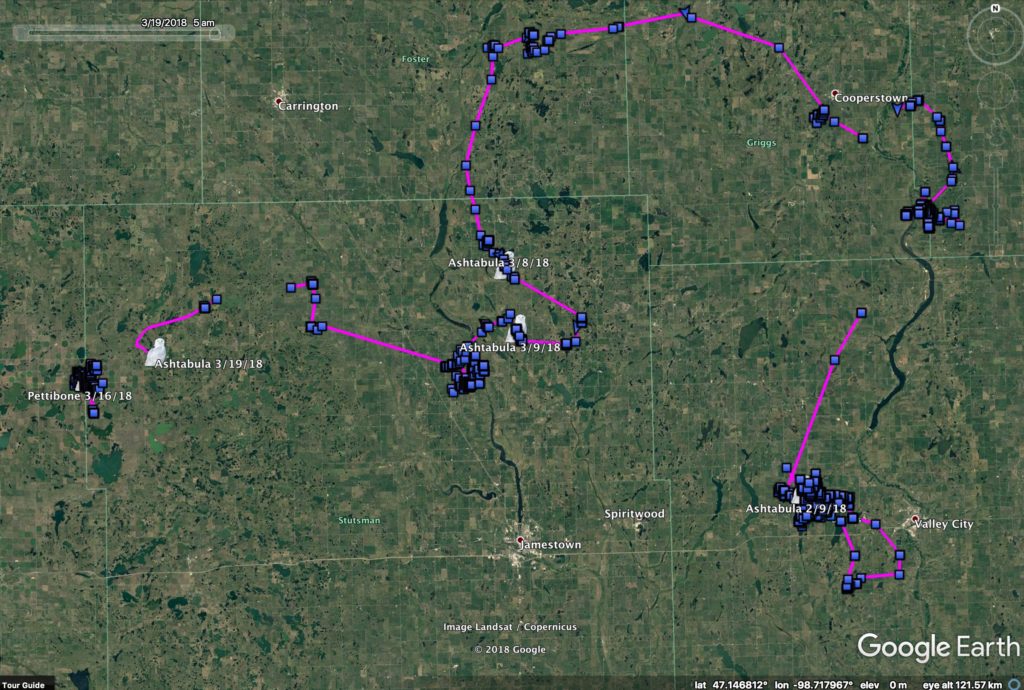 In recent weeks, Ashtabula has flown more than 160 miles (260 km), and is now in hollering distance of Pettibone. (©Project SNOWstorm and Google Earth)

Apologies for the lag in updates; everyone on Project SNOWstorm does this in their spare time, and sometimes spare time is hard to come by. I was out of town and largely off the grid last week, and unable to post. Sorry to have kept you waiting.

Unfortunately, the biggest news is the saddest — we’ve lost another owl, our fourth of the season. Manisses, our first Rhode Island snowy tagged on Valentine’s Day, was found dead Saturday morning, St. Patrick’s Day, on Block Island, where she’s been all winter. She’ll be examined by our veterinary team, which will conduct a full toxicology screen and look for signs of disease or other health issues, and we’ll get back to you with the results.

Ironically, the vets had just finished a large batch of necropsies on salvaged owls from across the Northeast this winter, including Hereford, our tagged owl that died at the beginning of the month in New Jersey, very close to where Higbee was killed by a vehicle in January. The necropsy confirmed that Hereford, too, suffered impact injuries, most likely from a vehicle. Owls and cars don’t mix safely.

Most of the other owls remain on their winter territories. Exceptions include Ashtabula in North Dakota, who has meandered more than 160 miles (260 km) to the north and west in recent weeks, and as of Monday evening was only a few miles from Pettibone in western Stutsman County. 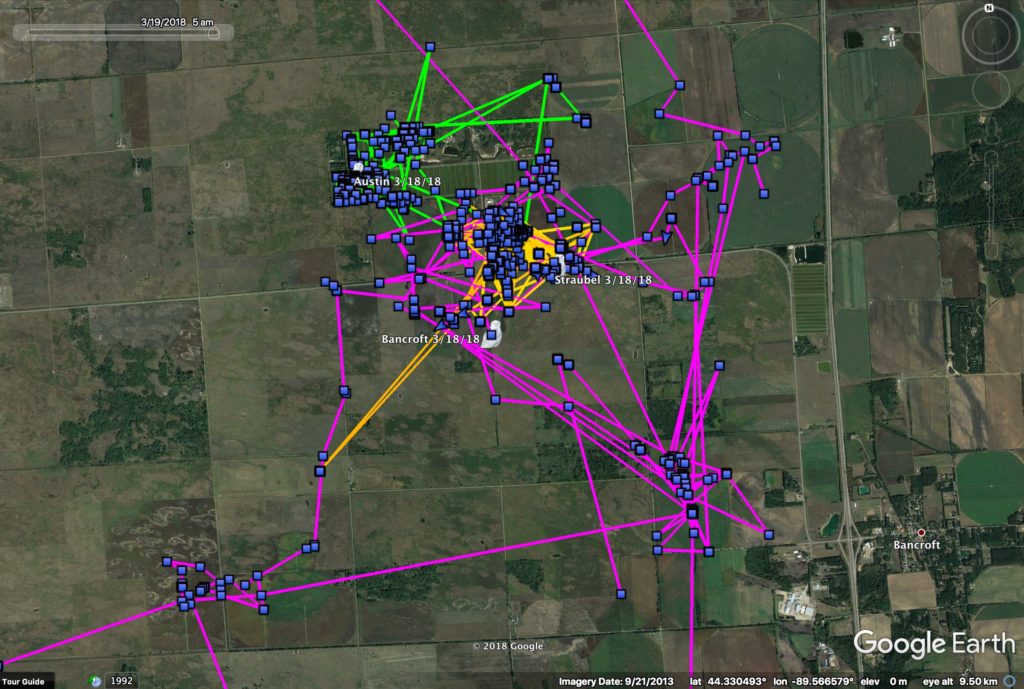 Bancroft (purple) has pushed back into his old territory from which Straubel (yellow) had initially excluded him. Austin (green) mostly keeps to himself. (©Project SNOWstorm and Google Earth)

In Wisconsin, Arlington — who had made a big move to the west in early March — has since stuck close to his new spot near Alma Center in Jackson County. And Bancroft, one of the trio of tagged birds on the Buena Vista grasslands in central Wisconsin, has lately been pushing back into his old territory, from which he had initially been evicted by Straubel, a larger female. Their tracks for the past week show a lot of overlap in space, if not in time. Neighboring young male Austin, though, seems mostly to keep out of Straubel’s way.

Island Beach has been moving frequently back and forth across the mouth of Delaware Bay, between Cape May, NJ, and Cape Henlopen/Lewes, DE, where he was at the beginning of the week. His transmitter has been struggling all winter, possibly because he keeps the solar panel buried in feathers, so the data we get from him is more sporadic than most. We’ve tried several times to retrap him and swap a different style of transmitter, but he was having none of it. 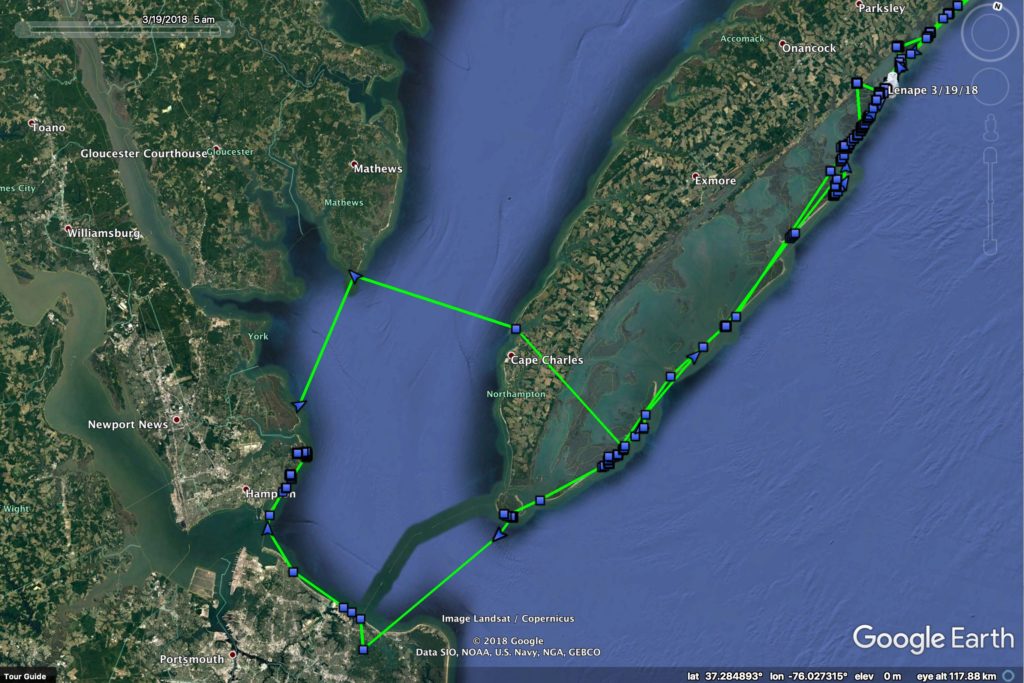 Twice is nice; having flown across the Chesapeake Bay once, Lenape did it again a few days later, and is now on the Virginia barrier islands on the Eastern Shore. (©Project SNOWstorm and Google Earth)

Island Beach’s fellow New Jersey-tagged owl, Lenape, continues his unprecedented wanderings along the mid-Atlantic coast — Lenape is the most peripatetic owl we’ve ever tagged. Having crossed the mouth of the Chesapeake Bay in Virginia earlier this month, this young male soon flew 14 miles (22.5 km) back across the bay to the Eastern Shore, and has remained on the complex of rich, remote barrier islands that rim the Atlantic south of Chincoteague.

On Lake Ontario, the fast-disappearing lake ice has finally forced Stella completely to land on Amherst Island, ON — no more spending her days well offshore and only coming in to hunt. Likewise, Hilton has come off Lake Erie after several months mostly on the ice, and this week she’s been hanging out at Gull Point in Presque Isle State Park near Erie, PA — the most reliable spot in the Keystone State for snowies. Since part of the peninsula was cut off by storms, the point is difficult for humans to access, which doubtless enhances its appeal. In Michigan, Sterling remains near Holland, but like Island Beach his transmitter isn’t getting much sun, and hence we’re not getting a great data stream.

Help Us Head to the Arctic This Summer!
Across the Bay and Off the Ice

16 Comments on “Another Loss”