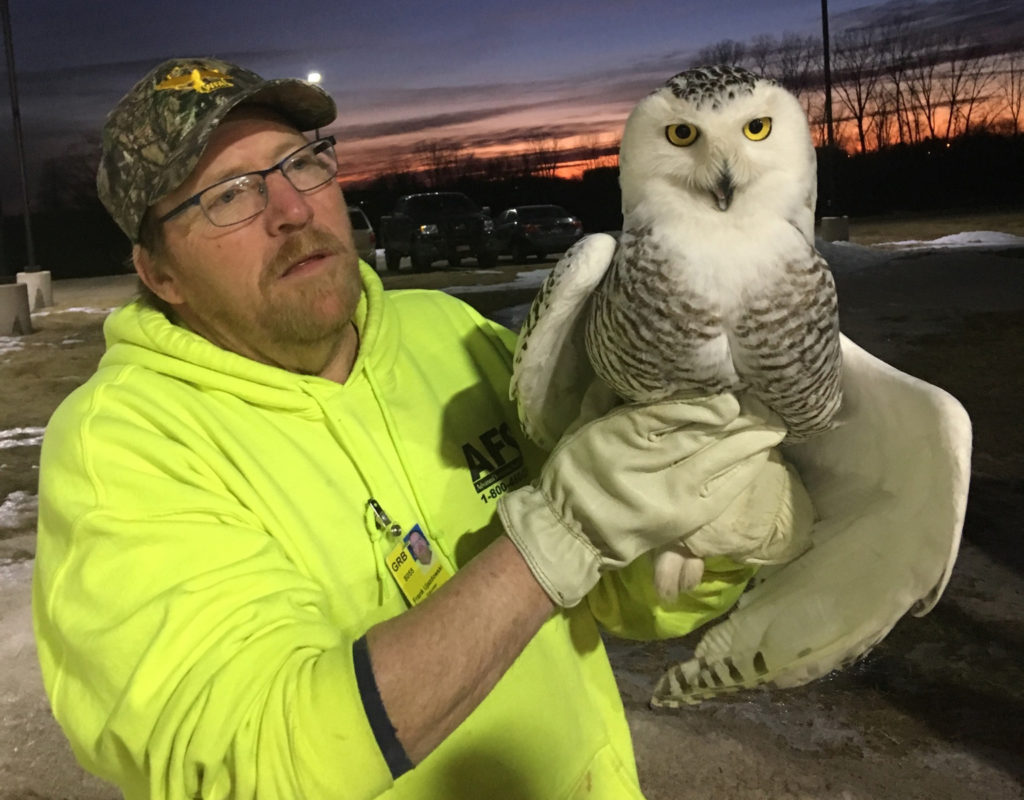 For the final time this winter, we have a new owl to introduce — the last member of what is now our Wisconsin quintet, joining Bancroft, Badger, Arlington and Austin.

She is Straubel, a juvenile female named for Green Bay-Austin Straubel International Airport, where she was trapped Feb. 21 by Frank Ujazdowski, one of half a dozen falconers volunteering their time this winter to relocate snowy owls away from airports in the Fox River Valley. 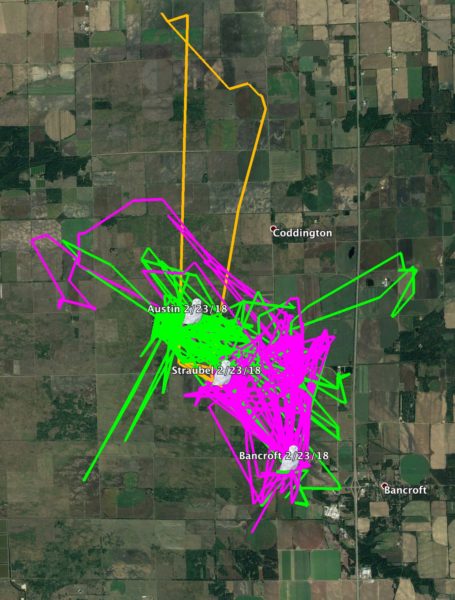 Straubel (yellow) moved north a bit, but then right down into the middle of ground held this winter by Austin (green) and Bancroft (purple). (©Project SNOWstorm and Google Earth)

Straubel was fitted with a transmitter by longtime SNOWstorm collaborator Gene Jacobs from the University of Wisconsin-Stevens Point, and released on the Buena Vista grasslands in central Wisconsin, close to where Bancroft and Austin (the latter also a relocated airport owl) have been wintering. We’re grateful to the Fond du Lac Area Foundation,  Fond du Lac County Audubon Society, and an anonymous donor working through both groups, for underwriting the cost of Straubel’s transmitter.

If she sticks around, Straubel may make the already fascinating movement data we’re getting from Austin and Bancroft even more interesting. Those two owls have been overlapping their territories but mostly avoiding each other. They are also both males — and we’ll be curious to see if a larger (and possibly more dominant) female like Straubel displaces one or both of them or if, because they’ve been holding ground all winter, they can bump her elsewhere. Initially, at least, she’s been right in the mix, having moved a bit north but then right back into the middle of Austin and Bancroft’s neighborhood.

Straubel represents a double milestone. She is the 22nd owl we’ve tagged this winter, equaling the record number we tracked in our first season in 2013-14, and she’s the 70th snowy owl Project SNOWstorm has tagged since its inception. 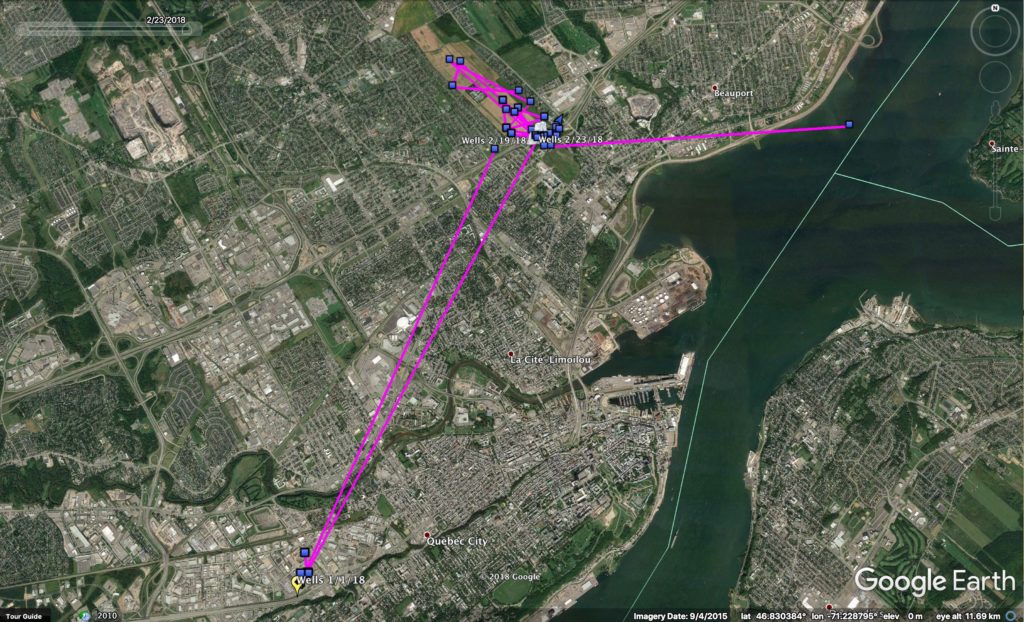 Wells has been mostly hanging out around an oasis of fields at the Centre Marcelle-Mallet in Quebec City, but making occasional excursions onto the St. Lawrence and into the city. (©Project SNOWstorm and Google Earth)

There’s lots more news, but let’s start with the two most dramatic updates.

Last week we expressed some growing concern about Wells, who after sending us all of her backlogged 2017 data, had only checked in twice since New Year’s. This past week, though, this returnee owl (tagged last winter in Maine) phoned home a couple of times and made it quite clear she’s fine and living on the outskirts of Quebec City, Quebec. Wells is spending most of her time on the wide fields surrounding the Centre Marcelle-Mallet, the convent of the Sisters of Charity (and hunting the highway margins nearby), but occasionally flying almost 7 km (4.5 miles) into the middle of the city to hunt along Autoroute 440, a busy highway where we had been concerned she’d been hit. Now that we know she’s OK, we hope she stays that way. 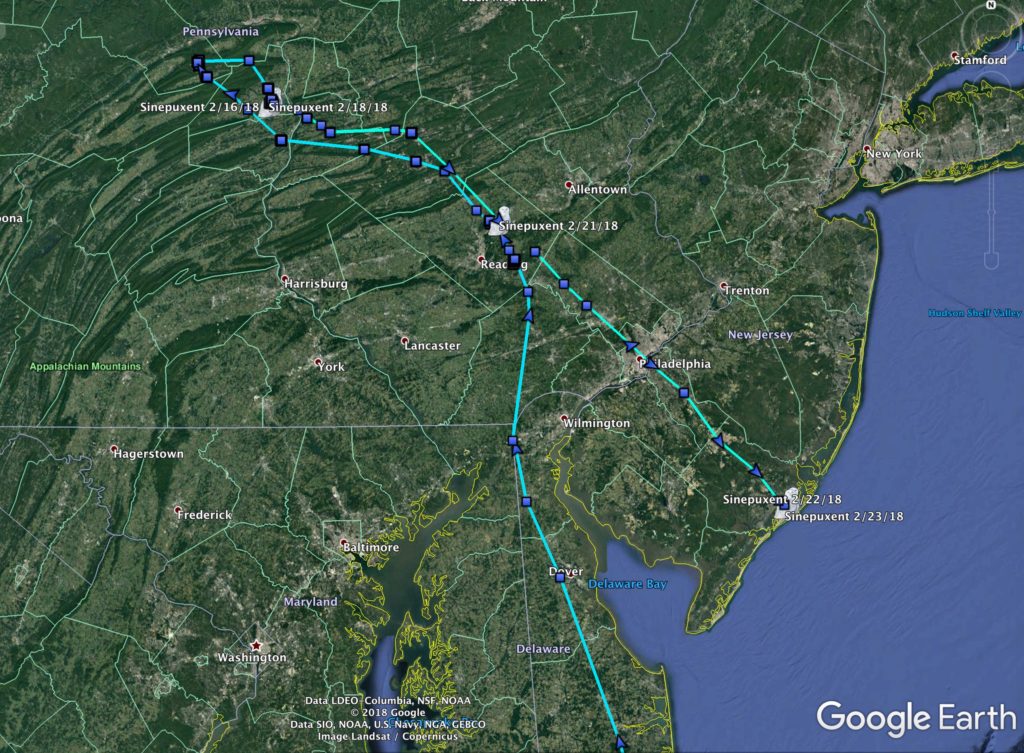 After a 500-mile (800 km) ramble through Delaware and central Pennsylvania, Sinepuxent made a rainy-night flight back to the coast in New Jersey. (©Project SNOWstorm and Google Earth)

The other big news was the lure of saltwater for Sinepuxent. Having left the coast of Maryland Feb. 16, she flew up into central Pennsylvania and spent a couple of days in the farmland west of Lewisburg, Union Co., where she delighted a number of local birders who were able to find her. But on Feb. 20 she hit the road again, moving south into Berks County, and then making a direct overnight flight through fairly heavy rain to the New Jersey coast, winding up in the tidal marshes of Absecon Bay just north of Atlantic City on Feb. 22. In all, she covered more than 500 miles (800 km) on her week-long jaunt, 110 miles (178 km) the final night alone.

Pettibone had been out of touch for a week or so, but he checked in from his prairie haunts in North Dakota last week. His territory overlaps the border between Kidder and Stutsman counties, and unlike Ashtabula one county to the east, he’s ignoring the small prairie pothole ponds and marshes that dot the landscape, and using irrigated crop land along the miles of gravel road that bisect this wide, flat country.

In off the ice of Lake Ontario for her nocturnal hunting, Stella heads out through the twilight on Amherst Island. (©Daniel Lafortune)

On Amherst Island, we got some nice photos of Stella and Emerald from our Ottawa friends Daniel and Patricia Lafortune. I’m not going to run through all the rest of the 2017-18 crew — their maps have all been updated, and we invite you to do some exploring. The Great Lakes owls — Hilton, Sterling and Gichigami — were out of touch this past week, as was Island Beach on the New Jersey shore, and Ashtabula in North Dakota, who again seems to be in his cell-coverage dead zone. With luck we’ll have news from everyone soon.

3 Comments on “Straubel, and the Weekly Roundup”