Straubel is framed by a newly risen full moon on March 31, as she watches her territory on the Buena Vista grasslands of Wisconsin. (©Tom Koch)

Last week, we saw the first signs of northbound migration, but over the weekend we had several owls making major movements north in New England, Quebec and the Midwest.

Arlington, who began moving a couple weeks ago, actually stopped and reversed course a bit in recent days in Pine County, Minnesota, not far from the “snout” of Lake Superior, and some 475 miles (765 km) from where he wintered in southern Wisconsin. On April 2 he was not far from the St. Croix River on the Minnesota side, near St. Croix State Park. 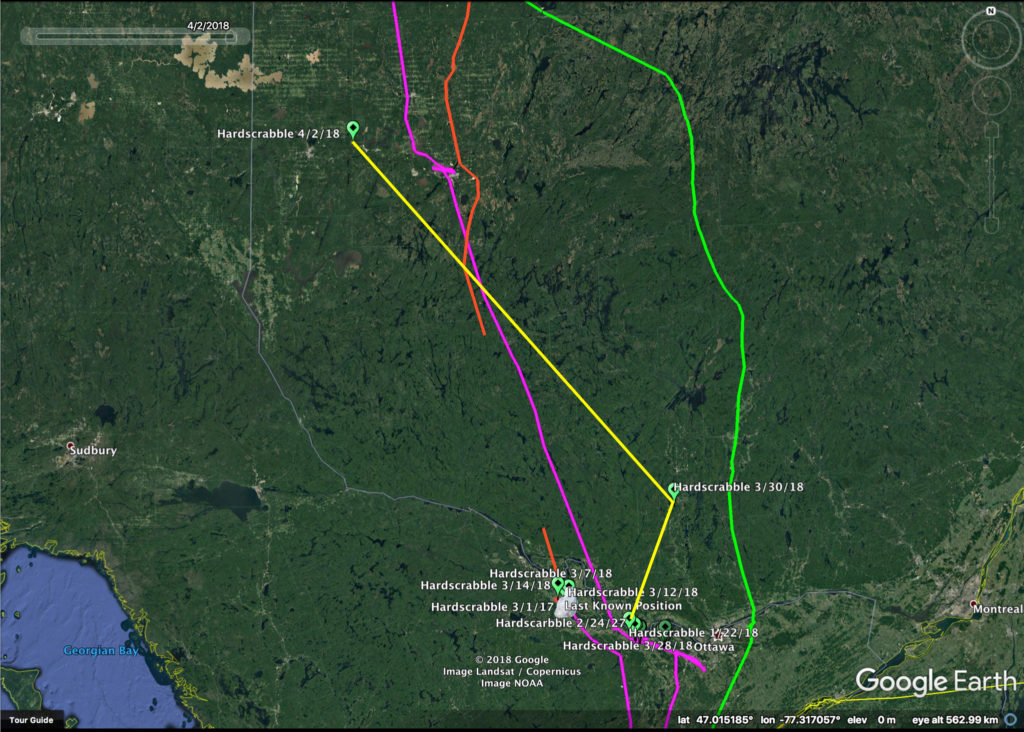 Hardscrabble has made a big push north in recent days (yellow track), along a route he’s generally followed in the past — spring 2016 (purple), fall 2016 (orange) and spring 2017 (green). (©Project SNOWstorm and Google Earth)

Hardscrabble, who had spent his third winter in the Ottawa River valley of southern Ontario, made a huge push across Quebec in just a couple of days. Although we’re not getting constant GPS locations from him because of battery issues, we do get a current location when he checks in every day or two. On March 28 he was on his longtime territory near Kinburn, ON, but two nights later he had moved 193 km (119 miles) due north, south of Maniwaki, QC, near the Lac Blue Sea complex of lakes. By April 2 he was another 306 km (190) miles to the northwest, midway between Val-d’Or and Lake Abitibi. That’s pretty much right along the same route that he took when he headed north in 2016, south that fall, and north again in 2017.

At the same time, he’s continuing to give us backlogged data while still storing fresh GPS locations — the trouble is, his battery browns out after just sending a few dozen data points, so we keep falling farther and farther behind. The solution would be to remove and replace the faulty unit, which we tried repeatedly to do this winter without success. For now, we can just hope to find him again next winter and have more success trapping him. 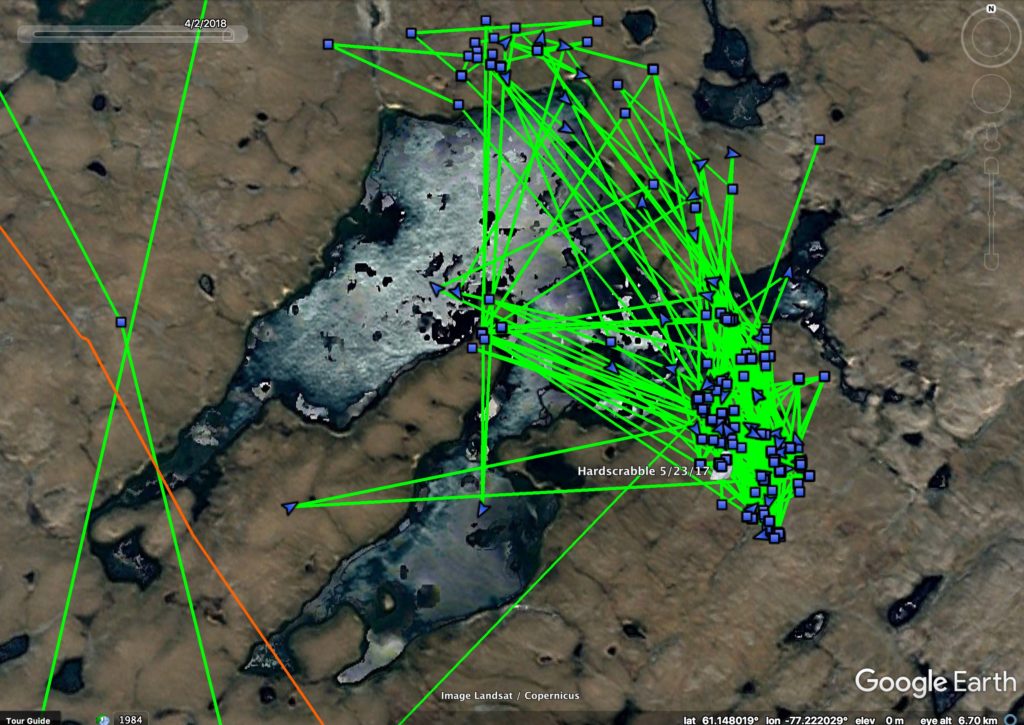 We’ve recovered enough of Hardscrabble’s backlogged 2017 data to see that by late May 2017 he’d set up a small territory in northern Quebec — perhaps a nest? (©Project SNOWstorm and Google Earth)

But with his old data uploaded through May 23, 2017, it seems pretty clear that he had again settled down on a very limited territory in northern Quebec — likely a nesting territory, though the data signature for a male like Hardscrabble is less clear-cut than for a female that spends a lot of time incubating. Still, it certainly seems as though he was beginning the nesting process. 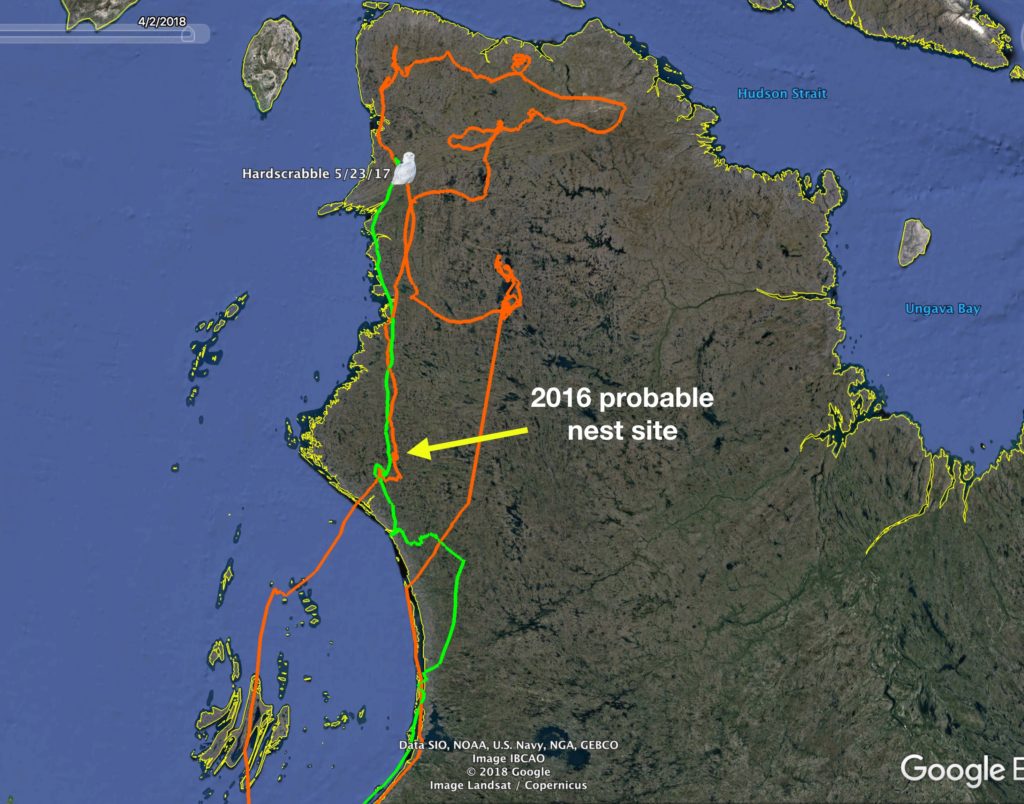 If Hardscrabble was nesting last summer, it was well north of his presumed nest site in 2016. (The orange tracks over land represent post-breeding movements July-Dec. 2016.) (©Project SNOWstorm and Google Earth)

Over in New England, Norman Smith’s been increasingly concerned about Logan, who after Norman relocated her from Logan Airport has spent the last two months in heavily urban areas just a few miles from downtown Boston. At least four other snowy owls have been picked up dead in that region, and toxicology tests suggest they died from rodenticides. While there were plenty of ducks on the nearby Mystic River, there was no sign from Logan’s tracking data that this adult female was hunting them regularly. 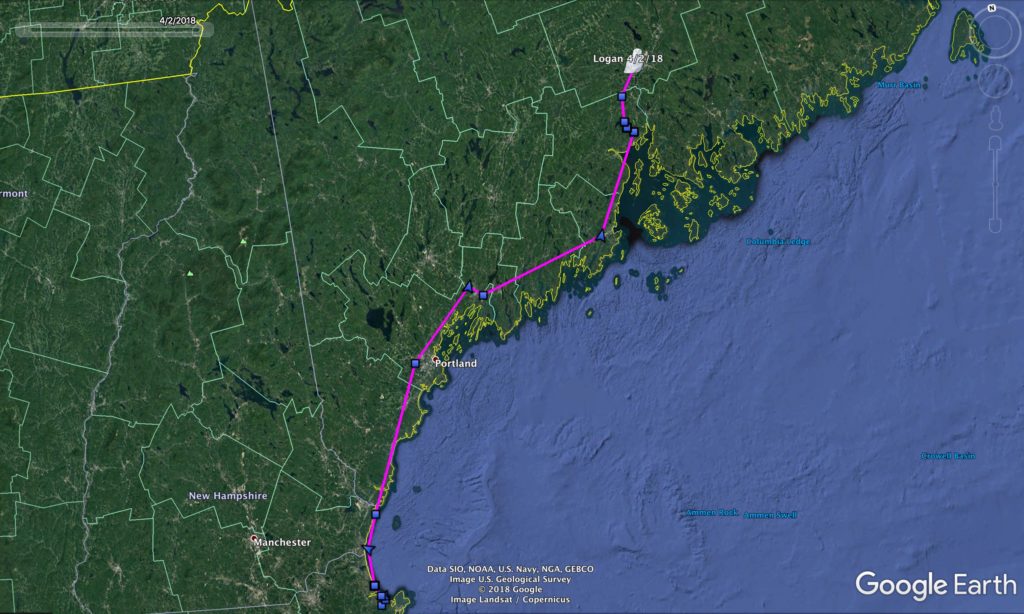 Logan picked up stakes in Massachusetts and made a quick flight north to Bangor, Maine, over the weekend. (©Project SNOWstorm and Google Earth)

So we all breathed a little sigh of relief when Logan picked up March 31 and began a rapid flight up the coast. In one night of travel she moved 170 miles (275 km) from northern Massachusetts to the midcoast of Maine, finally stopping north of Belfast. On April 2 she was a bit further inland, at the Bangor Airport. When I contacted our colleague Adam Vashon at Maine Wildlife Services to let him know, he said they’d gotten a call earlier in the day about an owl at the airport, and a WS agent had tried to catch it without success. No wonder; Logan’s been trapped at least twice in the past by Norman, and may be getting wise. Hopefully she’ll push on from the airport soon — as a breeding-age adult, she has a powerful pull to the north at this time of year.

None of the other owls — most of which are juveniles, several years away from breeding age — have shown a lot of northward movement. On the mid-Atlantic coast, Lenape has moved north out of Virginia into Maryland on the Eastern Shore, but this bird has basically never stopped flying all winter, so it’s hard to say if this was migration or more of the same. Farther north, Island Beach has been back and forth again across the mouth of Delaware Bay, and last weekend was up on the huge saltmarshes along the northern bayshore on the New Jersey side, as well the town of Fortescue. Sinepuxent is still in the Atlantic City/Margate area, mostly way back in the marshes. 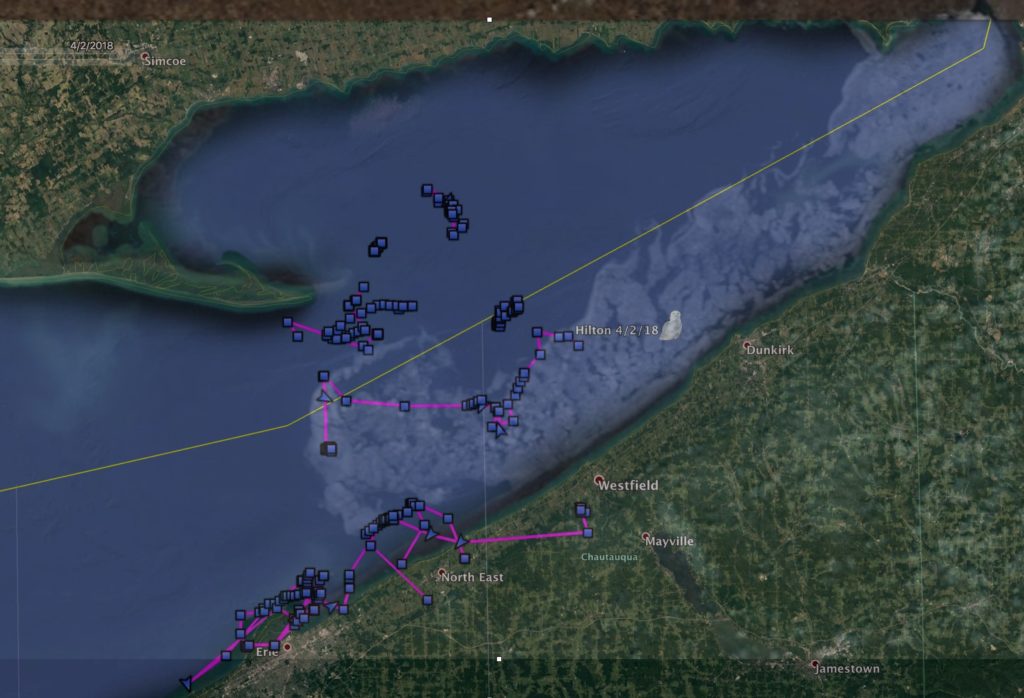 Hilton had better enjoy the ice of Lake Erie while she can, because it’s disappearing fast, as this composite of tracking data and ice imagery shows.  (©Project SNOWstorm, Google Earth and NOAA CoastWatch)

At last report on April 2, Hilton was about 6.5 miles (10 km) off the southern shore of Lake Erie, near Dunkirk, NY. Sterling was off the grid this week, as was Gichigami. Stella and Emerald are still in place on Amherst Island, although Emerald made her first flight across to the mainland all winter, which may portend growing restlessness. No movement from Wells or Chickatawbut in Quebec, or Pickford and Pennington in the Michigan Upper Peninsula. Austin, Bancroft and Straubel are still divvying up their 8-square-mile (20.5-sq.-km) area in central Wisconsin, where photographer Tom Koch got a great shot of Straubel framed by a full moon the other night.

Out in the Dakotas, Pettibone is hanging tough on his winter territory, while Ashtabula looped south a fair bit into Emmons County, North Dakota, about 30 miles (50 km) east of the Missouri River.

North (and South) - but Mostly North
Let the Race Begin