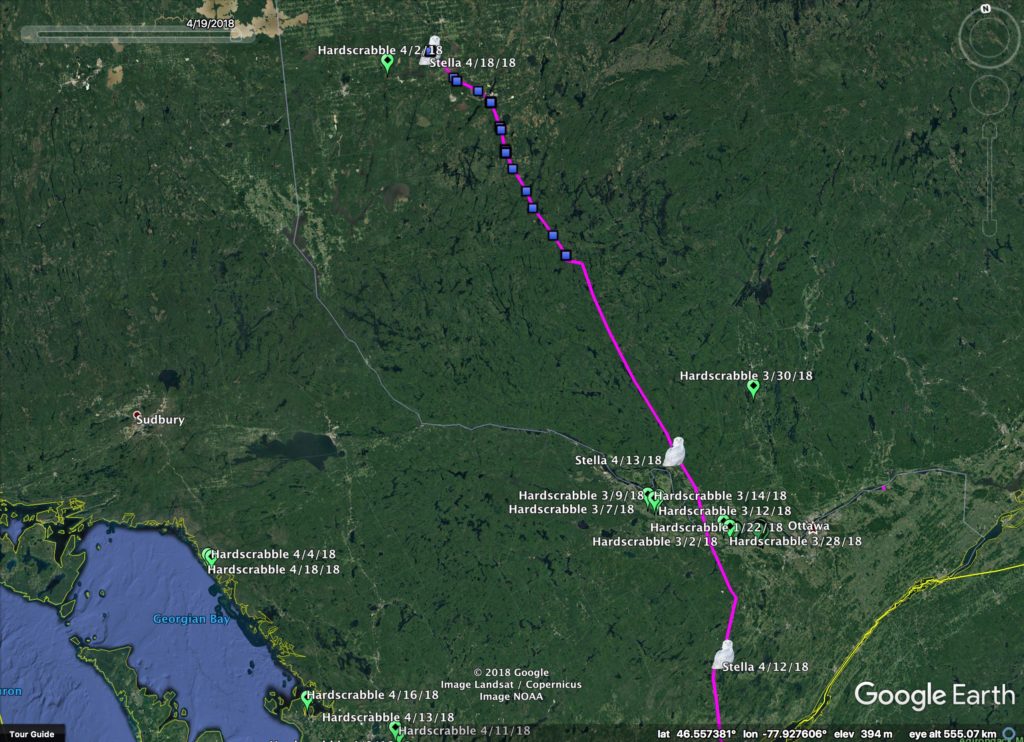 Stella has moved into far western Quebec northwest of Val-d’Or, very close to where Hardscrabble was April 2. (©Project SNOWstorm and Google Earth)

The past week was a wild one for weather across much of the terrain our tagged owls are inhabiting. Some places went from summerlike tee-shirt weather one day to whiteout snow squalls the next, while blizzards and ice storms raked still other regions.

So it’s not surprising that some owls that had been moving north hung back –but others pushed on regardless, while quite a few haven’t started to budge yet.

The biggest movements have come from Stella, who left her shoreline territory on Amherst Island April 11, and has moved almost 500 km (300 miles) north to western Quebec. As have a number of our tagged owls over the years, she stopped off near Val-d’Or (fortunately avoiding the huge open-pit gold mine just west of there at Malartic, where we lost Oswegatchie to unknown causes in 2014). As of April 18, she was north of Lac Preissac and Lac Malartic in an area of boggy forest. Meanwhile, her island chum Emerald remains on her Amherst territory, showing no signs of restlessness — yet. 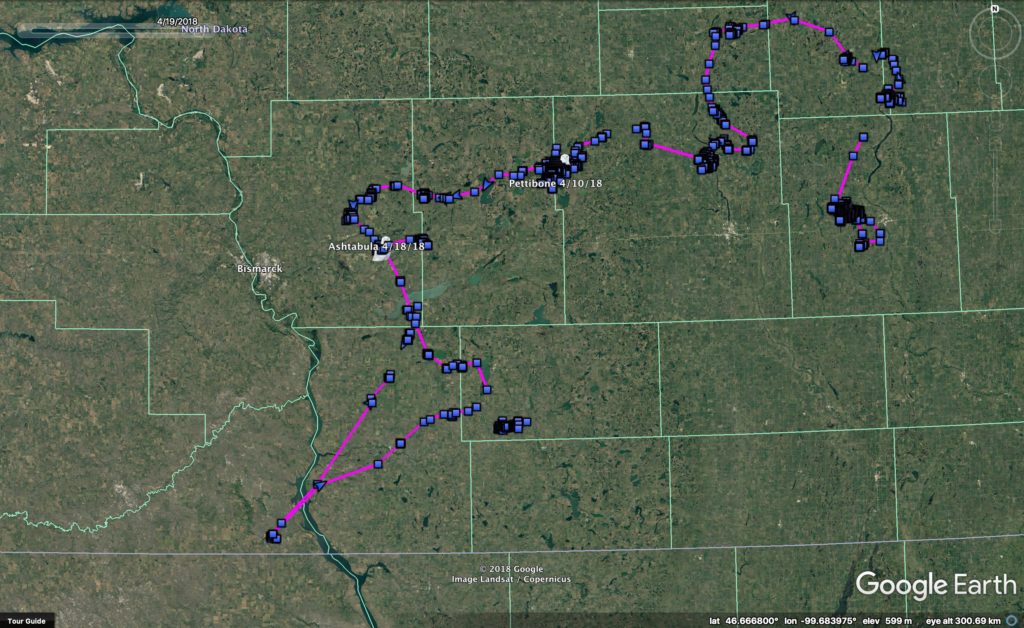 Ashtabula continues his ambling tour of central North Dakota — when will he head north for real? (©Project SNOWstorm and Google Earth)

Out west, Ashtabula is still meandering around southcentral North Dakota, in Burleigh County, about 25 miles (40 km) east of Bismark; he’s been on the move since the middle of February, and as an adult male, he ought to be seriously thinking about turning his beak north and heading back to stake out a territory. Pettibone, on the other hand, is still a juvenile, and he remains on his winter haunts, the core of which is just 4.5 square miles (12 sq. km). [Oops — After this was posted Matt Solensky, who banded both of these males, corrected my faulty memory — Pettibone’s the adult, and Ashtabula is the juvenile. Thanks, Matt.] 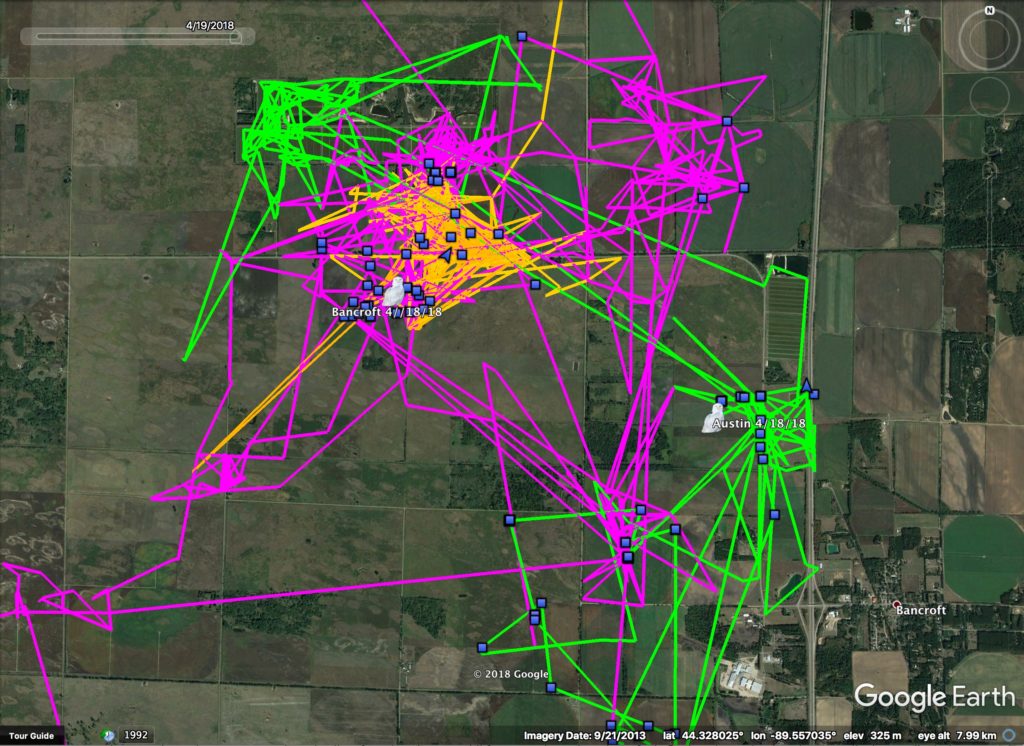 With Straubel out of the picture, Bancroft (purple tracks) has reoccupied areas Straubel (orange tracks) had taken over the past two months, while Austin (green) maintains his distance. (©Project SNOWstorm and Google Earth)

After making his own wide-ranging moves out of central Wisconsin last month, Arlington has been holding tight in eastern Minnesota since the beginning of April. Lately he’s been using the Southeast Industrial Park in Cambridge, MN, about 40 miles (65 km) north of Minneapolis. Back in Wisconsin, Straubel is moving around the prairie/ag/cranberry bog complex east of the Wisconsin River. That means that Bancroft and Austin — whom she’d elbowed out of parts of their winter territories — have been free to move back, and indeed Bancroft has shifted right back into what had been the core of his activity area before the larger female Straubel moved in in late February. 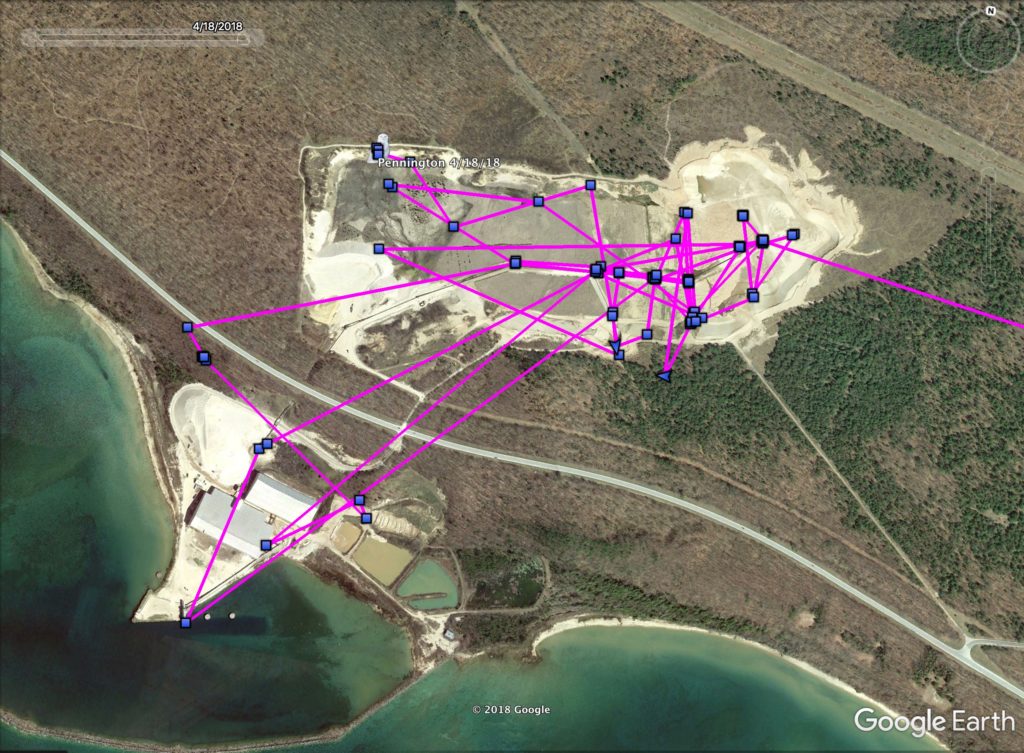 An island of sorts in a sea of trees, a sand quarry and port facility have been Pennington’s home the past few days. (©Project SNOWstorm and Google Earth)

Badger, near Freedom, WI, and Pickford in the U.P. of Michigan, haven’t shown any wanderlust yet, but Pennington has left his spot near Pickford and moved to the northern edge of Lake Michigan, where he’s hanging out at the huge sand quarry and shipping port at Manitou Payment Point — some of the only open land in that otherwise heavily wooded area. Farther south on the same lake, Sterling remains just north of Holland, in the Lower Peninsula of Michigan. No word from Hilton this week.

Hardscrabble — who on April 2 was only a few kilometers from where Stella is now — has moved northwest along the coast of Georgian Bay in recent days, but it’s too soon to say whether he’s ready to resume his aborted flight north again. 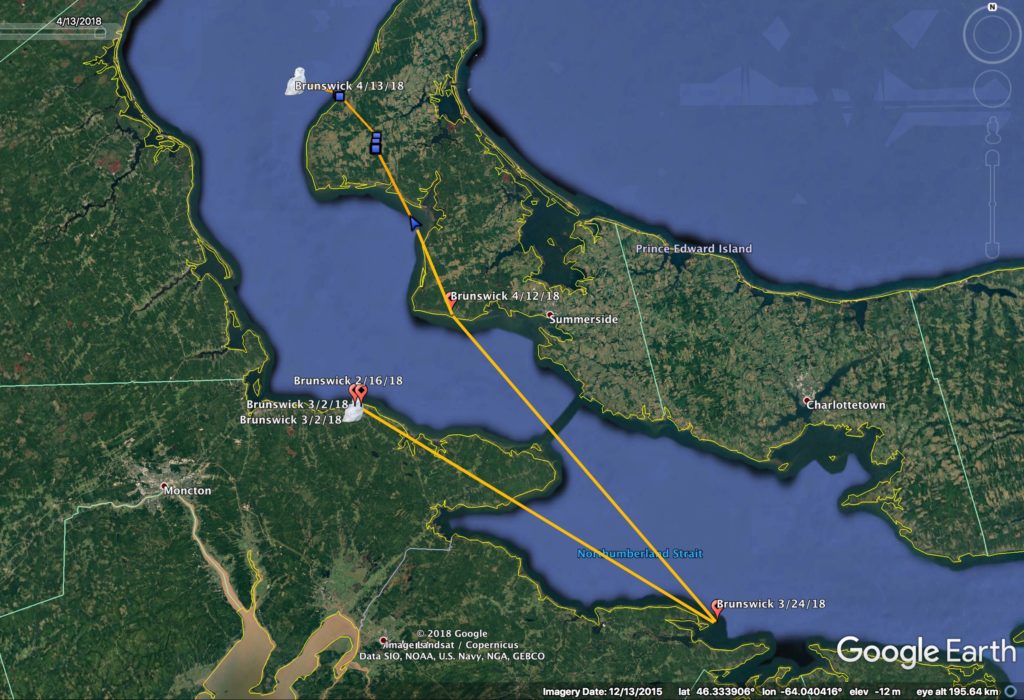 Brunswick has moved from the coasts of New Brunswick and Nova Scotia to — and now beyond — Prince Edward Island. (©Project SNOWstorm and Google Earth)

Along the St. Lawrence in Quebec, there are no changes to report with Wells or Chickatawbut, while Logan remains where she’s been since April 9, along the south shore of the river near the town of Montmagny. We continue to get periodic transmissions from Brunswick, who moved from Cap-Pelé on the coast of New Brunswick to near Fox Harbour on the north shore of Nova Scotia, then across the Northumberland Strait to Prince Edward Island. At last contact on April 13, she was 8.5 km (5 miles) off the northwest tip of PEI, presumably on ice. She’s our most easterly-ever owl; from her location to Ashtabula is about 2,600 km (1,700 miles). 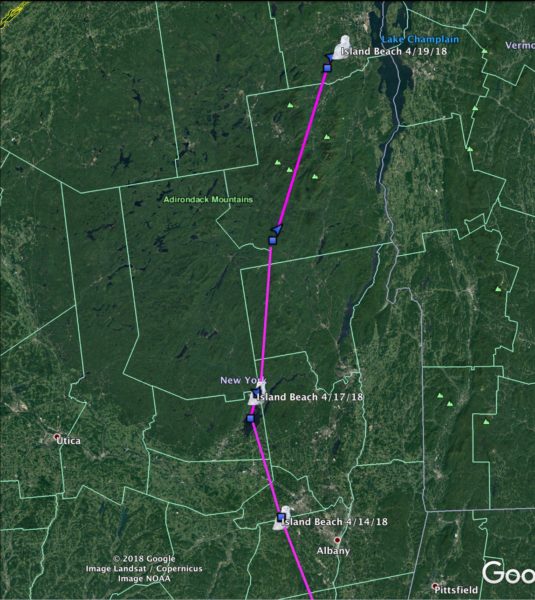 Island Beach is moving steadily north through New York state. Having left Long Island, he moved to just northwest of Albany on April 14, and to Great Sacandaga Lake in Fulton County by April 17. That’s been a popular lake with other tagged snowies, most notably Century, who spent some time there in March 2014. Thursday night (April 19) he’d crossed the densely forested and decidedly hostile (to a snowy owl) Adirondack Mountains and was near Plattsburgh, NY, just west of Lake Champlain.

Finally, down on the New Jersey coast Lenape has been relatively sedentary, at least for him, moving about on Long Beach Island and Holgate. We haven’t heard from Sinepuxent in a few days; her transmitter had developed an inexplicable lack of solar voltage, which we’ve been trying to figure out, but likely has dipped below transmission level.

4 Comments on “Stops and Starts”